Blaine Gaskill was named as the armed school resource officer at Maryland’s Great Mills High School, who is credited with helping stop a teenage school shooter who wounded two classmates. He’s being praised as a hero for his quick intervention engaging the shooter, Austin Wyatt Rollins.

“When the shooting took place, our school resource officer who was stationed inside the school was alerted to the event and the shots being fired,” St. Mary County Sheriff Timothy K. Cameron said. “He pursued the shooter and engaged the shooter. He fired a round at the shooter; simultaneously the shooter fired a round as well.” The shooter was declared dead at a hospital; it later turned out that Rollins died from the self-inflicted bullet.

“Their weapons went off simultaneously, with Rollins shooting himself in the head and Gaskill shooting Rollins in the hand,” according to The Baltimore Sun.

The sheriff released the names of Deputy First Class Gaskill and Rollins at a news conference on March 20, 2018, shortly after the shooting unfolded, leaving a teenage girl fighting for her life at the hospital.

Austin Wyatt Rollins, 17, produced a handgun while in hallway F, and shot a high school student, a female, who is 16, and a second male student, 14, the sheriff said in a press conference. There was a prior relationship between Rollins and the female student, authorities revealed.  “It’s an exceptionally tragic day,” a school official said. “If you don’t think this can’t happen at your school, you are sadly mistaken. We are shaken, but we are very strong at St. Mary’s. This is an incredible community.”

The shooting came in the midst of a national debate on arming teachers and gun control after the Florida school shooting in which Nikolas Cruz is accused of shooting multiple students and staff to death at Parkland’s Marjory Stoneman Douglas High School. The Maryland school shooting occurred less than two hours from Washington D.C. and a few days before a major gun march is scheduled to take place. The victims’ names were not released.

The shooter, who was also a student at the school, where he was on the honor roll, is dead. The shooting broke out just before classes started around 8 a.m. Blaine Gaskill is listed as the school resource officer on the school’s website.

1. The Armed School Resources Officer Is a SWAT Team Member Who Is a ‘Tough Guy,” Authorities Say

This is @firstsheriff Deputy Blaine Gaskill, the hero who stopped the shooting at a MD high school today

Blaine Gaskill was a well-trained and armed sheriff’s deputy who confronted Rollins (pictured above), potentially preventing additional tragedy. “This is a tough guy who closed in quickly,” authorities said at the news conference, adding that Gaskill is a SWAT team officer. “He may have saved other lives.”

According to USA Today, Sheriff Cameron said that “a male student (now identified as Rollins) fired at a female student in a hallway, also hitting a male student. An armed school resources officer arrived at the scene, exchanging shots with the gunman.”

St. Mary County SDDeputy Gaskill is on the left.

The female student was in critical condition, according to Fox News. Both students were taken to the hospital. The sheriff confirmed Gaskill’s name in the afternoon news conference.

School buses are lined up in front of Great Mills High School after a shooting on March 20, 2018 in Great Mills, Maryland. It was reported that two students at a Maryland high school were injured after a colleague opened fire in the hallway just before classes began.

The Sheriff’s Departtment wrote on Facebook, “There has been a school shooting at Great Mills High School. Sheriff’s Office is on scene and the scene is contained. St. Mary’s County Public Schools and the Sheriff’s Office are advising parents to respond to the Leonardtown High School auditorium and reunification will take place at the James A. Forrest Career and Technology Center. Please do not respond to Great Mills High School. Press staging area will be at Chancellors Run Regional Center.”

Video shows police officers responding to shooting at Great Mills High School in Maryland. “The event is contained,” according to the school district. https://t.co/p6ZPCw44RZ pic.twitter.com/m9TMfrSjyi

Rollins, the shooter, had a pretty innocuous Facebook presence. His cover photo is of a racetrack. He did write that he was in a relationship in December 2016. Posts involved anime, Minecraft, and rowing. 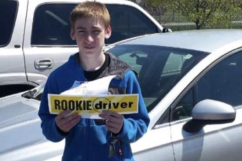 2. A Man Previously Was Accused of Pointing a Gun at Gaskill

It’s not the first time that deputy Gaskill has looked down the barrel of a gun and acted effectively, according to authorities. A man from Great Mills, Pekka Robert Heinonen, was previously accused of “committing a first-degree assault on sheriff’s deputy Blaine Gaskill,” according to a report in the Maryland Enterprise.

According to the newspaper, the “Great Mills man dropped a gun after a nighttime confrontation this week with a lawman at the suspect’s home.”

Gaskill’s family has long ties to Maryland, according to a family obituary. Gaskill doesn’t appear to have been in the news much, although he also made a police blotter item that said he responded to a “violation of a protective order.” The allegation was said to have occurred at St. Mary’s College in 2013.

In another incident that made the local newspaper’s police blotter, in 2013, “Deputy Blaine Gaskill responded to a residence on Sea Side View in Ridge, for an assault.” A woman was accused of slapping another person.

3. The School Has Had School Resource Officers Since the Late 1990s

According to the St. Mary County Sheriff’s Department, the School Resource Officer (SRO) “performs a variety of roles to include being a mentor, teacher and a law enforcement resource for both students and staff. They work with the school faculty to maintain a safe learning environment. Each SRO is certified through the National Association of School Resource Officers (N.A.S.R.O.) as well as through DARE America to teach the middle school DARE curriculum.”

The department says it’s school resource program “was implemented in St. Mary’s County during the 1998-1999 school year. The Sheriff’s Office, in conjunction with the St. Mary’s County Board of Education entered into a memorandum of understanding which assigned a Sheriff’s Deputy to each of the three county public high schools. The program was expanded during the 2005-2006 school year adding two additional deputies who split their time between the four public middle schools.”

Great Mills High School posted a statement on its website confirming the shooting. “Students are being evacuated from GMHS and being bused to the reunification center at the Leonardtown HS campus. The building is orderly and the Sheriff’s Office is conducting an investigation. We will continue to update as more information becomes available,” the website for the school said.

The Great Mills shooter had a handgun, Fox News reported. Governor Larry Hogan tweeted, “We are closely monitoring the situation at Great Mills High School. @MDSP is in touch with local law enforcement and ready to provide support. Our prayers are with students, school personnel, and first responders.”

4. A Florida High School Student Reached Out to the Maryland Students & Gaskill’s Actions Stand in Stark Contrast to the Florida Shooting

Emma Gonzales, one of the Florida high school shooting survivors who has become prominent in the wake of the Florida attack, reached out on Twitter to the Maryland students.

“We are Here for you, students of Great Mills ? together we can stop this from ever happening again,” she wrote.

Gaskill’s quick intervention stands in stark contrast to what happened at Parkland. In Florida, the armed school resource officer was accused of not entering the building to confront the shooter as the gunman slew multiple people in the hallways and classrooms. The attorney for the Parkland officer, Scot Peterson, has said that Peterson did not enter the school only because he mistakenly thought the gunfire was coming from outside the building.

He resigned after being suspended without pay in the wake of the shooting, CNN reported.

5. Frightened Students Posted on Social Media & Gaskill Was Lauded as a ‘True Hero’

Jim Watson/AFP/GettyPolice at the scene of a shooting in Great Mills.

As has been seen in other modern mass shooting situations, students at the school posted terrified accounts on social media. Terrence Rhames, a senior at Great Mills, told NBC News that “he and his friends were talking before class when they heard the pop of a loud gunshot.”

“I heard one shot and when we ran, we saw a teacher and he was looking at us with a confused look,” Rhames said to NBC. “We were trying to figure out if this is real.”

People praised Gaskill for his quick-thinking intervention on Twitter. One man, echoing the thoughts of others, called him a “true hero who did his job.”