Getty Chasten Glezman (L), and Mayor Peter Buttigieg at the 2017 GLSEN Respect Awards at the Beverly Wilshire Hotel on October 20, 2017 in Los Angeles.

Chasten Glezman Buttigieg, a teacher, is married to former South Bend, Indiana, Mayor Pete Buttigieg. Buttigieg ran for the Democratic nomination for president before dropping out and endorsing President Joe Biden. Buttigieg has since been confirmed as Secretary of Transportation.

Glezman’s popularity soared during his husband’s presidential campaign. He also used his expanding social media presence to encourage voters to get out to the polls to support Biden. After Biden was announced as the projected winner, Glezman wrote on Twitter, “Hope and decency are headed back to the People’s House.”

Here’s what you need to know about Pete Buttigieg’s husband, Chasten:

1. Glezman’s Memoir, ‘I Have Something to Tell You,’ Became a Bestseller

Glezman shared his life experiences with the world in a memoir, I Have Something to Tell You, that was published in September 2020. The book quickly became a bestseller and it was nominated for “Best Memoir & Autobiography” in GoodReads Choice Awards.

Glezman details his journey coming out as a gay man and the struggle that ensued when he told his family. He also shared his love story with Buttigieg and experiences from the campaign trail.

But he also did not hold back on the darker details of his life. Glezman recounted a sexual assault and admitted having suicidal thoughts. He explained to USA Today he was nervous about sharing it all but felt it was important. “In politics, you’re not supposed to open up about those things. It seems like people don’t share their vulnerabilities because if you were ever vulnerable or something happened to you, then somehow it makes you weak. And I just don’t understand that and I don’t prescribe to that thinking.”

2. Glezman & Buttigieg Met On the Dating App Hinge; Glezman Says He Was ‘Hooked’ After Their First Date in South Bend

Glezman first met Buttigieg online. They connected on the dating app Hinge in August of 2015. In the wedding announcement for the New York Times, Glezman explained that he and Buttigieg spoke over FaceTime for several weeks before meeting in person. Glezman was living in Chicago at the time working toward his master’s degree.

In September of 2015, Glezman traveled to South Bend for their first date. He told the Times that Buttigieg took him to the Fiddler’s Hearth pub, where Buttigieg introduced Glezman to a bar snack called the Scotch egg. The snack is a hard-boiled egg wrapped in sausage, covered in bread crumbs and deep-fried. The newspaper referred to it as a “sausage-wrapped cholesterol depth charge.” Buttigieg shared that he knew the relationship had a chance because Glezman had been willing to try the egg.

The pair watched a minor league baseball game and walked around downtown South Bend on that first date. Glezman said they also watched fireworks, which were lit at the end of the baseball game. Glezman admitted that he “was hooked” from their first date.

Glezman moved in with Buttigieg in late 2016. He traveled to Chicago three days a week until he completed his master’s degree.

3. Glezman & Buttigieg Got Married in an Episcopal Church & Stopped By a Pride Week Block Party Before Heading to the Reception

“Life is short, and we do not have much time to gladden the hearts of those who travel with us; so be quick to love, make haste to be kind, and go in peace to follow the good road of blessing.” pic.twitter.com/fExJflA2em

Glezman and Buttigieg tied the knot at the Cathedral of Saint James Episcopal Church in downtown South Bend on June 16, 2018. Their respective parents walked them both down the aisle. Reverend Brian G. Grantz officiated the ceremony, which was shared on the church’s YouTube channel. It was the first time in four decades that a sitting mayor of South Bend had gotten married while in office.

Following the ceremony, Glezman and Buttigieg took a short detour before heading to the reception. According to the South Bend Tribune, the couple stopped by an LGBTQ Pride Week block party. The newspaper reported that the couple wanted to thank community members for being supportive of their union.

The reception took place at a co-working space called LangLab with approximately 200 guests. Their first dance was to “When You Say Nothing At All” by Alison Krauss. The reception included arcade games such as Skee-Ball machines.

The couple also gave TIME magazine a glimpse into the routines of their married life during an interview in May of 2019. “Chasten handles the dogs, the shopping, the cooking. Pete does the dishes, laundry and garbage. Chasten hates taking the bin out to the curb. Pete hates the way Chasten folds T-shirts.”

4. Glezman Told His Parents He Was Gay After Studying Abroad in Germany & Was Homeless For Several Months After Coming Out

Chasten Glezman was born on June 23, 1989, in Traverse City, Michigan. His parents are Terry and Sherri Glezman and he has two older brothers.

Glezman spent his senior year of high school studying abroad in Germany. Pete Buttigieg explained in his memoir that during that year, Chasten “gained a command of spoken German, a little weight on his scrawny teenage frame, and a deeper awareness of who he was. Incapable of self-deception, he fully understood by the time he came back that he was gay, and needed for his family to know.”

Glezman told the New York Times that his sexuality was a difficult subject in his Roman Catholic household. He said the news was met with confusion and friction at first. “I don’t recall my parents specifically saying I couldn’t live at home anymore, but I was made to believe I needed to leave.”

Glezman spent time on friend’s couches and living out of his car after moving out of his family home; he had started college at that time as well. He reconciled with his parents a few months later. Read more about that time in Glezman’s life here.

Glezman told the New York Times that growing up, while his brothers preferred to throw a ball around or work on cars, he enjoyed acting out skits. Glezman has also been vocal about how his high school drama teacher played an important role in helping him to feel safe during his teenage years, as he struggled with his identity. You can read more about his background in theater and why he loves it here.

After briefly considering a career in nursing, Glezman eventually decided to pursue theater as a profession. Glezman earned a bachelor’s degree in Theater and Global Studies from the University of Wisconsin – Eau Claire in 2011.

After obtaining his bachelor’s degree, Glezman moved to Milwaukee, Wisconsin. He worked for First Stage, which describes itself on its website as “one of the nation’s most acclaimed children’s theaters and the second-largest theater company in Milwaukee.”

Glezman worked for the company for three years as a Teaching Artist. On his school’s website, Glezman was praised for “bringing drama to thousands of students throughout the greater Milwaukee region and inspiring students with autism and learning differences to pursue drama.”

I got back to work at the South Bend Civic Theatre yesterday, and by work, I mean play. We spent some time as a community discussing the importance of theater and the necessary push for arts inclusive education. We also just had a lot of fun playing “escape from planet lava.” pic.twitter.com/pXJofscLPN

Glezman ultimately decided that he loved being an educator and wanted to pursue it further. Glezman moved to Chicago in 2014 to earn a master’s degree in education. He attended DePaul University while also working as a substitute teacher for Chicago Public Schools. After moving to South Bend, he began subbing at South Bend Public Schools.

Glezman later went to work at Montessori Academy of Edison Lakes, which is located a few miles east of South Bend in Mishawaka. He taught humanities and drama to junior high students. He resigned on January 5, 2019, in order to be there for his husband on the campaign trail.

But Glezman continued teaching drama part-time after Buttigieg launched the campaign. Glezman served as the Director of Curriculum at the South Bend Civic Theatre. He shared pictures from the theater on May 15, 2019, writing on Twitter, “I got back to work at the South Bend Civic Theatre yesterday, and by work, I mean play. We spent some time as a community discussing the importance of theater and the necessary push for arts inclusive education. We also just had a lot of fun playing ‘escape from planet lava.'” 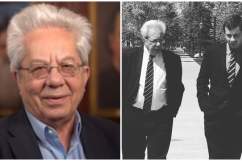