Pete Buttigieg’s husband, Chasten Glezman Buttigieg, told his family he was gay during the summer after he graduated from high school.

Though Glezman, 30, now has a good relationship with his parents, Terry and Sherri Glezman (they walked him down the aisle on his wedding day), the information did not initially go over very well. The friction prompted Glezman to pack his bags. He lived out of his car and slept on friends’ couches while attending community college and working two jobs. After a few months, his parents asked him to come home.

1. Chasten Glezman’s Family Initially Struggled to Accept His Identity As a Gay Man & He Left Home Shortly After Coming Out

Pete Buttigieg explained his husband’s experience of coming out as a gay man in his autobiography Shortest Way Home. He wrote that Chasten spent his senior year of high school in Germany, where other people in the exchange program accepted him for exactly how he was. Chasten made the choice to tell his parents after he graduated from high school.

Buttigieg wrote that the Glezmans “thought it was a choice. It made no sense to them, hardworking and churchgoing people who did everything they knew how to set a strong foundation in life for their three boys, that the youngest could select such a destructive and immoral path. How could he harm his family life this? Or was it somehow their own fault, something they had done wrong when he was little, or even before he had been born?”

Due to that friction, Chasten decided he needed to leave the house. His father, Terry Glezman, had lived out of a car during parts of his own childhood due to poverty. His youngest son had a similar experience as a young adult.

2. Chasten Glezman Worked Two Jobs & Attended Community College While Living at the Homes of Friends & Out of His Car

Behind this campaign are two incredible women who believe in their sons and a brighter future for their (someday!) grandchildren. Each of us is grateful for our Mom and Mom-in-law. We love you! pic.twitter.com/1BhBzzKZoV

Chasten Glezman began his college career without a stable roof over his head. He took classes at Northwestern Michigan College, the community college located in his hometown of Traverse City.

Glezman told the Washington Post that he sometimes slept on friend’s couches, but was concerned about becoming a burden to anyone. That prompted him to sleep some nights in his 2004 Saturn Iron. He would park the car in Northwestern Michigan’s lot. Buttigieg’s memoir explains that Glezman “was too busy and disoriented to contemplate the word ‘homeless’ or apply it to his own case.”

Glezman originally focused on a potential career in nursing while attending community college. At the same time, he worked as a nursing assistant at Munson Medical Center.

Chasten Glezman is no stranger to maintaining a hectic schedule. In the Shortest Way Home, Pete Buttigieg listed all of the jobs that his husband has had over the years. As a child, he often helped out with the family’s landscaping company.

Glezman’s first paying job was during high school. He worked at a veterinary hospital, helping to care for the animals and cleaning exam rooms. By age 16, he picked up a second job working as a busboy at a Mexica restaurant in Traverse City.

Buttigieg wrote that Glezman later worked at a shop called the Cherry Republic, which sold cherry products and cookbooks. He also worked as a home health aide and cared for a boy with cerebral palsy.

4. Chasten Glezman Worked a Second Job at Starbucks After Graduating From College in Order to Obtain Health Insurance

GettyPete Buttigieg and his husband Chasten

Chasten Glezman transfered from Northwestern Michigan College to the University of Wisconsin-Eau Claire. He graduated in 2011 with a bachelor’s degree in theater arts and global studies. His part-time jobs after leaving Traverse City included waiting tables, bartending, running the cash register at Toys ‘R’ Us during the holidays, selling clothing at Eddie Bauer, and teaching children’s theater.

Glezman’s love of theater led him to a job at First Stage, a children’s theater in Milwaukee. He told the Washington Post that the full-time job did not include benefits such as health insurance. That prompted Glezman to get a second job as a barista at Starbucks. He told the newspaper that he worked 20 to 30 hours per week at the coffee shop on top of his full-time teaching job in order to have insurance.

Glezman added that he quit working at Starbucks, following a transfer to Chicago, after he was threatened by a man with a knife.

5. Chasten Glezman’s Parents Walked Him Down the Aisle At His Wedding

Chasten Glezman’s relationship with his parents, Terry and Sherri, was mended significantly following those few months after he graduated from high school and told them he was gay.

Pete Buttigieg wrote that they welcomed him warmly into their home when he met them for the first time in Traverse City. They also walked Chasten down the aisle at the wedding. 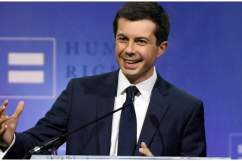 Pete Buttigieg Net Worth: 5 Fast Facts You Need to Know

Loading more stories
wpDiscuz
0
0
Would love your thoughts, please comment.x
()
x
| Reply
Chasten Glezman, Pete Buttigieg's husband, was homeless for a few months after telling his family he was gay.