Pete Buttigieg has been attracting a lot of attention in the race for the Democratic nomination for president. The millennial mayor of South Bend, Indiana has gained substantial name recognition among potential voters since a CNN Town Hall appearance on March 10.

Two very important members of his family have also seen a significant uptick in popularity on social media– his dogs Truman and Buddy! The two pups, dubbed the “first dogs of South Bend,” have more than 75,000 followers on Twitter, up from just 1,000 back in October of 2018. They have cultivated personalities that could be described as mischievous and at times ornery.

Buttigieg’s husband, Chasten, who has also developed a following on social media, is likely the person posting the majority of the messages from the dogs. He even asked Buzzfeed to create a quiz that would determine “Which One Of Mayor Pete’s Dogs Are You?” Less than three hours later, the quiz was ready and you can take it here.

Hi. I'm Truman. You may know my roommates, Mayor Pete and Chasten. Let's talk about me. I came to South Bend from Kentucky where I didn't have such great roommates. The wonderful people at Heartland Animal Rescue fostered me until my roommates officially adopted me on April 8, 2017. Now I'm discovering my new city, the places that make it a great place to be, and my very important role as First Dog. So I'm taking you along with me. I'm excited to get out in the city and meet you. I'll also be speaking up for issues I care about. Like howling, licking up peanut butter, and comfy chairs for snuggling in. If you ever see me out and about just go slow and I'll happily take a treat off your hands or smell your fingers. (Have you been eating peanut butter?!) See you in the city, ?T

Truman joined the Buttigieg family on April 8, 2017. He was the original “first dog of South Bend” with his own Instagram page. He referred to Pete and Chasten as his “roommates.”

In his first Instagram post, Truman explained that he was originally from Kentucky and had been taken care of by the “wonderful people at Heartland Animal Rescue” before being adopted. He shared that he took his “official” role in South Bend very seriously and was excited to explore the city and meet as many new people as possible. Truman added that he would “speak” up for issues close to him, such as “howling, licking up peanut butter, and comfy chairs for snuggling in. If you ever see me out and about just go slow and I’ll happily take a treat off your hands or smell your fingers. (Have you been eating peanut butter?!)”

Truman eagerly lived up to that promise! He got to check out Notre Dame, where his “grandparents” (Mayor Pete’s parents) were both professors.

Truman had to make sure the bike paths in South Bend were adequate, joking “My paws don’t reach the pedals but I’m still a fan.”

My paws don't reach the pedals but I'm still a fan. #limebike #bikesouthbend

I know all my lines.

The Instagram page went quiet in the summer of 2018, but Truman kept up the hard work on Twitter. For example, he assisted Mayor Pete with the 2019 budget proposal with a gentle reminder not to forget the bacon…

this mornin i sent the mayor my 2019 budget puposal

lol it is just 300 pages of bacons pic.twitter.com/LWlJWz2y1c

Truman protected everyone from the big bad squirrels, vowing to “bork” at them all until he could “bork no more.”

i will bork at every squarel until i can bork no more. this i do for the people. pic.twitter.com/BE3R6iiNqq

Then in December of 2018, Truman stepped up to perform his most important role so far– welcoming his new brother, Buddy, to the family. He celebrated with a “breaking news” post and a picture of Buddy.

Buddy Was Adopted From a Dog Shelter in December of 2018

We were told that Buddy might be a challenge. Especially in a home with another dog. They were right… as you can see here, he is very demanding (of scratches). pic.twitter.com/vfMqhAVQVq

Buddy joined the Buttigieg clan in December of 2018. He wasted no time attracting attention; he was snoozing on the couch behind Mayor Pete as he conducted a Facebook Live interview with “Progress Iowa” and social media commenters wanted to know more.

Buddy has made himself at home

Buttigieg explained on Twitter that he and Chasten adopted Buddy from a shelter called Pet Refuge. Buddy, who has one eye, was estimated to be between 4 and 6 years old and needs a lot of attention and love. Buttigieg used the moment to encourage other families to consider adoption, writing that “Buddy is a reminder of how many loving, beautiful animals are waiting for forever homes in shelters.”

Can you tell if he’s comfortable?

I DIDNT KNOW DOGGO ICE CREAM WAS A THING UNTIL MY GRANDMA CAME TO VISIT AND NOW LIFE IS NOT THE SAME pic.twitter.com/gUGyqd7rMg

Truman, in particular, plays up the part of “big brother” with gentle teasing. For example, on January 20, “Truman” tweeted about Buddy’s apparent smells. “there seems to be a gas leek in the living room. from my brother buddy. pleas send help.”

Truman and Buddy have teamed up on important issues. In the picture below, they appear united in apparent apprehension about the idea of taking a bath. The caption reads, “bath day. sup?”

As brothers do, they have embarked on missions to find trouble, such as getting into the “garbag” when their dads left the door unlocked. And they have tweeted about getting all excited to greet the mailman.

lol dads left the garbag door unlock so many noms

The dogs are also beginning to pay attention to the presidential race. Buddy tweeted a sad post in February of 2019, writing “FEELIN BLU. MISSIN MY DADS. PLZ SEND TREETS. ?B”. Perhaps they’ll be brought along the campaign trail to battle those blues…

But at the same time, Truman and Buddy are also very supportive of their dad’s ambitions. They tweeted in all caps on March 28, 2019, “ITS TIME TO PUT A PUGGLE IN THE WHITE HOUSE.”

ITS TIME TO PUT A PUGGLE IN THE WHITE HOUSE 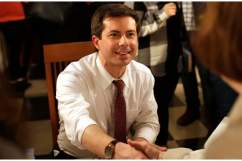