Getty One person died and four people were critically injured in a shooting at a Geneva Presbyterian Church in Laguna Woods on Sunday, May 15, 2022.

Multiple victims have been shot at Geneva Presbyterian Church church in Laguna Woods, California, officials said. One person was killed and five other people were injured, officials said. A suspect is in custody, according to the Orange County Sheriff. Authorities identified the suspected gunman as David Chou.

Undersheriff Jeff Hallock said in a press conference that churchgoers detained the suspect, disarmed him and “hogtied” him. The suspect is an Asian male in his 60s, Hallock said. His name was not released. Hallock said they are still working to determine a motive and they do not know whether it was a “hate-related” incident. Hallock said they did not yet know whether the suspect had any connections to the church and whether any victims were targeted. The churchgoers who intervened were hailed as heroes for preventing further deaths and injuries. Two handguns were recovered from the scene, Hallock said.

Four people suffered critical injuries and one suffered minor injuries, officials said. The injured victims were rushed to local hospitals, and the person who was killed was found dead at the scene. Deputies arrived to find witnesses had tackled the suspect and tied him up with extension cords, the news release said.

Laguna Woods is a city in Orange County adjacent to Laguna Hills and Lake Forest. The city is located about 10 miles from University of California Irvine.

This is a breaking news post that will be updated as more information becomes available.

1. Irvine Taiwanese Presbyterian Church Also Meets in the Building & Most of the Victims Were of Taiwanese Descent 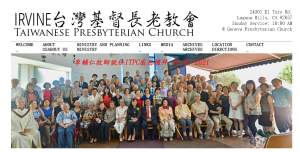 Undersheriff Jeff Hallock told the OC Register that many of the people who were in the church at the time of the shooting were of Taiwanese descent. The Irvine Taiwanese Church website says they meet at Geneva Presbyterian Church. Hallock confirmed during a press conference a luncheon was being held at the church following services.

Hallock hailed the intervening churchgoers who detained and disarmed the suspect for their “extreme heroism and bravery.”

The Presbytery of Los Ranchos said in a statement to the Orange County Register that it is “deeply saddened by a fatal shooting that occurred at a lunch reception honoring a former pastor of the Taiwanese congregation that nests at Geneva Presbyterian Church in Laguna Woods … Please keep the leadership of the Taiwanese congregation and Geneva in your prayers as they care for the those traumatized by this shooting.” 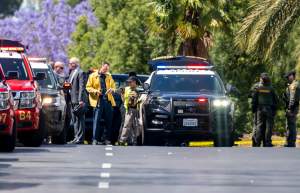 GettyOrange Sheriff deputies and investigators gather on Calle Sonora after one person died and four people were critically injured in a shooting at a Geneva Presbyterian Church in Laguna Woods on Sunday, May 15, 2022.

The newspaper reported the church also hosts The Geneva School, a Christian middle school. The OC Register reported the school “appeared to have sent a message to parents informing them about the shooting on Sunday, saying the violence occurred during ‘the Taiwanese church’s lunch meeting.'”

A translation of the Irvine Taiwanese Presbyterian Church website references Genesis 12 and God telling Abraham to leave his home for the Promised land. Pastor Li Furen compared the Bible story to the journey of the church congregants from their homeland to the United States.

“Just like Abraham, a group of Puritans in the seventeenth century set foot on the new continent of the United States in pursuit of freedom of belief and a better life. In pursuit of their dreams, we also became new immigrants to this country in the twentieth century, facing unfamiliar people. Environmental language and culture, we have experienced many challenges and difficulties, but because of this, we can better appreciate God’s wonderful leadership and abundant blessings,” the translation says.

One person was killed and multiple people wounded. https://t.co/ptP53afcm5

The pastors are listed as Li Furen and Albany Lee.

“IRVINE Taiwan Presbyterian Church is a big family full of love. We welcome all our friends to join us with open arms. In the love of God and the grace of Jesus Christ, we hope that all brothers and sisters can have more knowledge, and also In the journey of life, we can walk stronger and happier because of each other’s support,” the translation of the website says.

2. Geneva Presbyterian Church Congregants Heard a Sermon Shortly Before the Shooting About Welcoming Those Who Break Traditions

Driving to Laguna Beach on El Toro and see this. So sad pic.twitter.com/mPkmihCi8X

Geneva Presbyterian Church congregants gathered for a worship service shortly before a shooting inside the church, and were told in the message they should welcome everyone, even those who break religious traditions. The Rev. Ryan Romeburg spoke to congregants about tradition, and challenged them to ask themselves how they feel when they hear about something “new” in a video of the sermon posted on Facebook and later removed. He said that something “new” can create tension among Christians because the religion is rooted in thousands of years of tradition.

The sermon was based on Revelations 21:5, “See, I am making all things new.”

Romeburg said that the Bible verse referenced a passage from the book of Acts about welcoming those in the Church who broke traditional values, such as eating kosher foods.

The Geneva Presbyterian Church website says their regular church services are held at 10:30 a.m. on Sundays. The event calendar says a “High School Hang” was scheduled for 7 p.m. Sunday, and did not list any events for the afternoon after the morning service. The church bulletin says the sermon for May 15, 2022, was “Celebrating The Calling,” delivered by The Rev. Ryan Romberg.

The sermon was livestreamed on the church Facebook page. The page was later removed.

3. Social Media Users Shared Photos of the Active Shooter Scene From Outside the Church

Photos from my mom at the scene of a shooting at Geneva Presbyterian Church in Laguna Woods. @OCSheriff reports that multiple people have been shot, a suspect has been detained, and a weapon has been recovered. @FoxNews pic.twitter.com/UfgxfjQEYV

Several people shared photos on social media of the active shooter scene in the moments after the shooting.

One photo from a social media user showed a row of firetrucks outside Geneva Presbyterian Church.

“On my way to Laguna beach and the street is blocked off,” Judy Perez wrote on Twitter. “So incredibly sad! I hope the victims are okay!”

A Twitter user shared a photo of deputies and other first responders converging on the area, with Geneva Presbyterian Church pictured in the background.

“Driving to Laguna Beach on El Toro and see this. So sad,” the Twitter user wrote.

“Deputies are responding to reports of a shooting at a church on the 24000 block of El Toro Road in Laguna Woods. Multiple victims have been shot. More details to follow, PIO en route,” the Orange County Sheriff wrote on Twitter shortly after the shooting. “We have detained one person and have recovered a weapon that may be involved. We are working to get information out as quickly as possible. We ask for patience as this event unfolds.”

NOW – Multiple people shot at a church in Laguna Woods, California. The shooting happened inside the Geneva Presbyterian Church.

4 victims critically wounded, 1 with minor injuries. One is deceased at the scene, according to the police.
A suspect has been detained.@disclosetv pic.twitter.com/QWqFo8pBKY

Officials are asking the public to avoid the area. El Toro Road is closed between Calle Sonora and Canyon Wren. A press conference was scheduled for 5 p.m. local time.

Federal agents from the Bureau of Alcohol, Tobacco, Firearms and Explosives were also responding to the scene, according to the Associated Press.

4. ‘No One Should Have to Fear Going to Their Place of Worship,’ Gov. Gavin Newsom Said in a Statement

Orange County Sheriff says roughly 40 people were inside church during shooting. Large portion of attendees were Taiwanese. No word yet on victims or suspect identity. All victims were adults – FOX LA#California #OrangeCounty pic.twitter.com/g8SYrN89Y6

California Governor Gavin Newsom released a statement on Twitter expressing sympathy for the victims and saying the office was monitoring the situation.

We are actively monitoring the shooting at a church in Laguna Woods and working closely with local law enforcement.

No one should have to fear going to their place of worship. Our thoughts are with the victims, community, and all those impacted by this tragic event.

“We are actively monitoring the shooting at a church in Laguna Woods and working closely with local law enforcement,” the statement said. “No one should have to fear going to their place of worship. Our thoughts are with the victims, community, and all those impacted by this tragic event.”

5. Social Media Was Flooded With Messages of Sympathy & Support for the Church

UPDATE: At least one person was killed and several others were injured after the shooting inside Geneva Presbyterian Church. Here's the latest. https://t.co/WJYmeAK2DB pic.twitter.com/91u5D0WYBQ

Fellow pastors, community members and others flooded social media with support for the church in the hours after the shooting.

“The Pastor preached on love and letting love penetrate over political differences. Very foreshadowing. May the Holy Spirit touch and comfort this church,” Court Heath wrote in a comment on the May 15, 2022 video of the Sunday sermon.

“I’m praying for all my #PCUSA siblings this evening, and for everyone at the Geneva Presbyterian Church in Laguna Hills. May Christ’s peace be with you now,” E. Carrington Heath wrote on Twitter.

Breaking: One person is dead and 4 others critically wounded by a shooter at Geneva Presbyterian Church in Laguna Woods. @latimesphotos @latimes Suspect has been detained #shooting #lagunawoods pic.twitter.com/UqqmJYFZ5X

“May our Lord Jesus, the Divine Physician, heal and comfort the people in your congregation who were injured. May God’s arms hold and soothe all of you. Amen,” Jae Sue wrote on Facebook.