Make America Awesome, a PAC opposing Republican Presidential candidate Donald Trump, has run Facebook ads for Utah users ahead of the state’s caucus. The ad, seen above, features a photo from Melania Trump’s GQ photoshoot taken shortly before her marriage to Trump. The ad is aimed at increasing turnout among Utah’s LDS (Mormon) population, estimated at 62 percent of the population and likely a higher percentage of the state’s Republican electorate given their status as the most conservative religious group.

Buzzfeed editor McKay Coppins, himself a Mormon, shared a screenshot of the ad:

Trump was naturally unhappy, and tweeted a cryptic threat to Ted Cruz, the candidate supported in the ad, about his own wife:

While Cruz distanced himself from the ad in a reply, he didn’t mince words for Trump himself:

The two latest Utah polls show Trump down 24 and 21 points to Cruz, and possibly losing to Kasich as well, according to RealClearPolitics. A major reason is high unfavorability among Mormons, who tend to disagree with his history of left-leaning social positions, his hardline stances on immigration and Islam, and the tone of his campaign. Trump also has a history of criticizing Mormonism: Coppins reported that in a 2014 interview with Trump, the future candidate blamed Mitt Romney’s 2012 loss on his “alien” faith, and Trump spokeswoman Katrina Pierson failed to distinguish between criminal fundamentalist LDS sects and the mainstream LDS Church in previous interviews.

Trump’s unpopularity with Mormons is such that, despite 50 years of runaway Republican victories, a recent Deseret News poll shows that a Trump ticket for the Republicans would lose to both Bernie Sanders and Hillary Clinton in a general election. 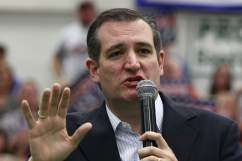