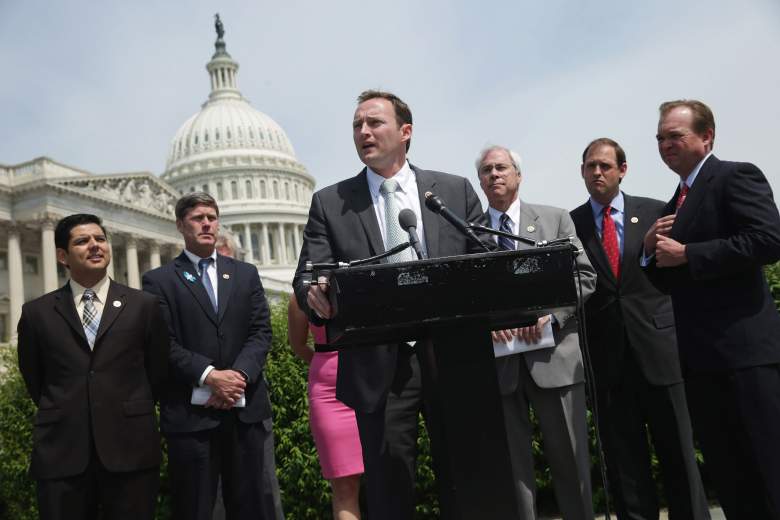 Patrick Murphy and other Congressmembers on May 20. (Getty)

Although it is not certain if Marco Rubio will run for re-election, it is clear who his Democratic opponent could be if he does. Patrick Murphy, who currently represents Florida‘s 18th Congressional district, is running for Senate. Murphy has only served two terms so far. While his first election was a nail-biter in 2012, Murphy easily won re-election in 2014.

Before Murphy can focus on his Republican rivals, Murphy, 33, still has to win a primary against his fellow Congressman Alan Grayson, who represents Florida’s 9th district. The primary is on August 30.

Murphy’s South Florida district covers sections of St. Lucie, Martin and Palm Beach Counties. He is on the House Committee on Financial Services and Permanent Select Committee on Intelligence.

Here’s a look at Murphy’s life and career.

1. Murphy Was One of Seven Democrats to Vote for House Benghazi Committee

While most Democrats voted against a House bill to create the House Select Committee on Benghazi in 2014, Murphy was one of seven Democrats who voted for it. Grayson has criticized Murphy for the vote, but Murphy has insisted that he only voted for it so Hillary Clinton could clear her name. According to The Tampa Bay Times, Murphy even said in October 2015 that the committee should be disbanded.

“While the congressman respects the work his colleagues have done already investigating this matter, when it comes to American lives lost overseas in service to our nation, we must make sure that all questions have been answered. He sincerely hopes that this committee is not used as a way to politicize this tragedy and the deaths of four Americans,” Murphy said in a statement in October.

Murphy does not serve on the committee, though. 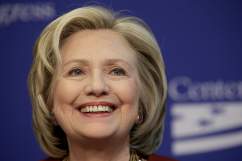 2. Murphy Used to be a Republican & Isn’t an ‘Ultra-Liberal’ Democrat 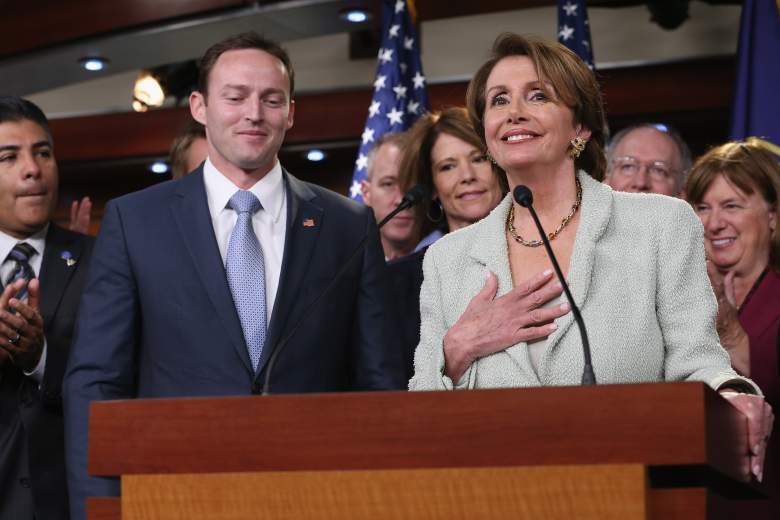 Murphy was not well-known when he decided to run for office and was vice president of his family’s construction company Coastal Construction Group. The accountant was a registered Republican and even donated $2,300 to Mitt Romeny‘s presidential campaign in 2007, the Palm Beach Post reported. He also donated for former Florida Governor Charlie Crist‘s Senate campaign in 2010 before Crist switched to being an independent.

He ultimately decided to run against Republican Allen West was West’s series of controversial comments.

“His extremism and radicalism and the hatred he preaches — my gosh, whether you’re Republican or Democrat, I mean, this is what’s killing the country right here. This is totally unbecoming of a leader,” Murphy told The Huffington Post. “I couldn’t believe he got away with it, and then how he was cheered for it.”

Although Murphy supports LGBT rights and is pro-choice, he told the Huffington Post that he is not an “ultra-liberal” Democrat. As an accountant, he supports fiscal responsibility.

Despite working as an accountant for his father in Miami, Murphy isn’t actually a Certified Public Accountant in Florida. A CBS Miami report found that Murphy has a CPA license in Colorado, which is not accepted in Florida because Colorado has lower requirements. 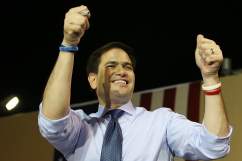 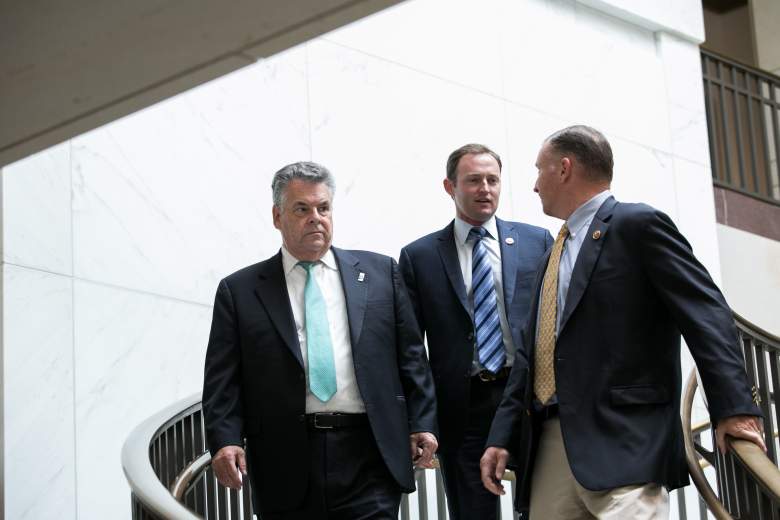 In 2012, West didn’t concede to Murphy until a few days after the race ended because it was so close. West waited two weeks, but eventually realized that he could not beat Murphy’s 1,904-vote lead. That was just a 0.58 percent lead, but it was still more than the 0.50 lead needed to begin a recount.

“I pray he will serve his constituents with honor and integrity, and put the interests of our nation before his own,” West said.

During the expensive campaign, it was reported that Murphy was arrested for drunk driving while in college at a Miami Beach night club. The DUI and fake ID charges were both dropped. Murphy called it “the biggest mistake of my life.”

West decided not to run again in 2014, so Murphy faced Florida State Rep. Carl J. Domino and won with 60 percent of the vote.

4. Murphy Exaggerated His University of Miami Degree & Called it an ‘Inadvertent Error’

After launching his Senate campaign in March, Murphy’s site claimed that he had earned “dual degrees in accounting and finance,” the Miami Herald reported. But the Jupiter Congressman really only earned a single degree from the University of Miami – a bachelor’s in business administration, with a focus on accounting and finance.

Murphy first claimed he had two degrees during his first Congressional campaign, but his official House and re-election campaign biographies had the truth. He also said he had “duel degrees” in other interviews.

Galia Slayen thanked the Herald for pointing out the “inadvertent error,” adding, “Patrick has a dual major in finance and accounting, with his degree in Business Administration. It is already corrected.”

In another strange moment from the campaign, the San Diego Union-Tribune reported that Vincent Gorguze of La Jolla, California donated $5,400 to Murphy. Unfortunately, Gorguze, the father-in-law of Rep. Scott Peters of San Diego, died in October 2013. Peters’ campaign said Gorguze’s name was listed by accident.

The Herald also revealed that Murphy’s father, Tom Murphy, has been a major contributor to Murphy’s political career. Tom Murphy has donated over $1 million to a super PAC that supports Murphy’s Senate bid. This has helped Murphy raise the most money to run against Rubio. 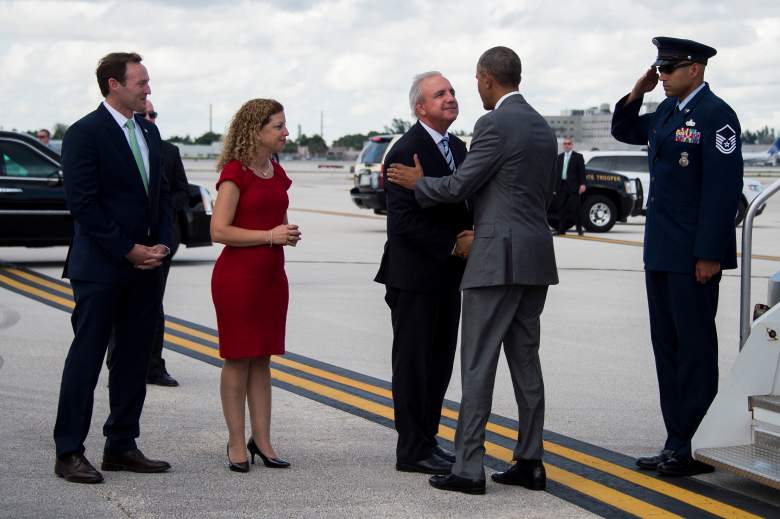 On June 3, President Barack Obama was in Miami to attend a fundraiser for Murphy, TCPalm.com reported.

In May, the Obama Administration made a more public endorsement of Murphy when Vice President Joe Biden campaigned for him in Orlando. Biden also campaigned for Murphy in March at a Miami restaurant. Biden praised Murphy and tried not to say anything bad about Murphy’s rival Grayson.

“This is the real deal,” Biden said with his hand on Murphy’s shoulder. “We need people in the Senate who can bring people together.”

Murphy was also with Obama when the president was in Jacksonville for a speech on the economy in February.