John McCain had seven children who a loving, extended family with multiple grandchildren. McCain’s children include three daughters and four sons, three from his first marriage to Carol Shepp and four from last marriage to Cindy McCain. When McCain was married to Carol Shepp from 1965 to 1980, he adopted her sons, Doug and Andrew, and then they had a daughter, Sidney. He and Cindy McCain had three children: Meghan, Jack, and Jimmy, and adopted a daughter Bridget.

John McCain leaves behind five grandchildren. In May 2018 when Kelly Sadler made a joke about McCain’s passing away, Cindy McCain replied in a tweet: “May I remind you my husband has a family, 7 children and 5 grandchildren.”

@kellysadler45 May I remind you my husband has a family, 7 children and 5 grandchildren.

His grandchildren include little John McCain, just recently born to Jack and Renee McCain in 2016. Then there’s Caroline McCain, who’s very outspoken and even endorsed Hillary Clinton for President. She’s the daughter of Doug McCain, who also has a son Sheldon McCain with his wife Ashley. And John McCain’s son Andrew has two children of his own with wife Lucy: Margaret and Andrew.

Here’s what you need to know about John McCain’s grandchildren.

1. Caroline McCain, John McCain’s Granddaughter, Supported Hillary Clinton Because She Was Angry About  What Trump Said About Her Grandpa

Caroline McCain, one of his grandchildren, wrote a heartfelt goodbye to her grandfather on Facebook. She’s a Client Solutions Manager at Facebook, and is the daughter of Doug and Ashley McCain, according to her Facebook page.

In 2016, Caroline endorsed Hillary Clinton for president. She wrote an essay about it on Medium. Her endorsement was partially based on what Donald Trump had said about her grandfather. She wrote: “My grandfather responded with grace and forgiveness — as only a man who was held in captivity for years can. But I’ve been nursing a grudge ever since.” She’s very outspoken about politics, but she also has a sharp sense of humor that comes through on her Twitter feed.

Well folks I think they should've pushed the fireworks til tomorrow pic.twitter.com/x95Tc55xUW

On occasion, she’s shared quotes from her grandfather on social media.

Caroline McCain’s brother, Sheldon “Shepp” McCain, born to Ashely and Doug McCain, is not in the spotlight as much as his sister. In 2008, Pilot Online noted that he was attending Norfolk Academy. According to his and his dad’s Facebook pages, he later graduated from UVA (the University of Virginia.)

Renee Swift McCain and Jack McCain, who were married in 2013, had their first child, a son named John in 2016. John McCain was ecstatic when the little boy was born. He shared this adorable photo on social media with his new grandson:

Renee has shared many proud photos of her son on social media over the last couple years.

Andrew “Andy” McCain, one of John McCain’s adopted sons, does not have a huge presence on the Internet. But in a 2008 interview with Arizona Central, he mentioned that he was married and had three children.  He’s married to Lucy McCain and they have two children: Margaret McCain, who is about 26, and Andrew, who is now about 23.

During the November 2012 elections, Margaret wrote on Facebook: “‘Whatever comes of our quadrennial sojourn to the ballot box, we can rest in the sovereign goodness of a Father who sits enthroned in the heavens and, with majesty and mystery, does whatever he pleases.’ Thankful that I can vote, but that I don’t have to put my hope in politics!”

5. Meghan McCain Moved Up Her Wedding Because of Her Dad’s Illness

Not all of John McCain’s children have children of their own yet. In fact, some of his children have only been married for a short time. Meghan McCain married Ben Domenech on November 21, 2017. They actually pushed up their wedding date because of her father’s battle with cancer.

And Jimmy McCain was married in April 2016.

Our son Jimmy McCain was married yesterday. It was a glorious day. @SenJohnMcCain @MeghanMcCain pic.twitter.com/0ZNjaqrfSo 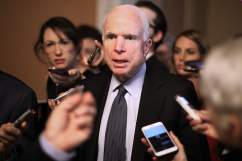