Getty/Twitter A screengrab from a video circulating on Twitter that shows a person tackling Dave Chappelle on stage.

Isaiah Lee was identified as the man suspected of attacking Dave Chappelle live on stage during his Netflix is a Joke performance in Hollywood. The 23-year-old Lee is being held on $30,000 bond after the May 3, 2022 assault, according to his booking record.

Lee was a ward of the state who was taken in by his grandma, Joy Chatel, a community activist known as “Mama Joy.” She died suddenly when Lee was 14, leaving him with a disability and “displacement anxieties,” according to a 2021 court filing. The filing was related to her estate, which had an abolitionist history. Her death left the future of the property in jeopardy, according to The New York Preservation Archive Project.

Lee was also an aspiring rapper who used the name Noname_Trapper and dropped a track called “Dave Chappelle” in 2020.

Police say the man jumped on stage during the comedian’s live performance in Hollywood and tackled him in an incident captured on video that circulated on Twitter. Read on to watch videos of the incident and the aftermath. The LAPD said Lee was taken into custody without incident. Chappelle was not injured.

Here’s what you need to know about Isaiah Lee and the attack on Chappelle:

Police said the man who attacked Chappelle, now identified as Isaiah Lee, was armed with a replica gun and a knife. They confirmed they responded to the Hollywood Bowl for an incident at about 10:45 p.m. local time, while releasing few other details on the incident. They said the suspect was taken into custody.

The appearance was a part of the Netflix Is a Joke Fest, a live Netflix comedy festival that started April 28 and continues through May 8. Chappelle was performing at the Hollywood Bowl in Hollywood, California at the time of the incident, according to his tour schedule.

According to TMZ, who cited police sources, “the attacker actually pointed the gun at Chapelle as he rushed him. We’re told the gun was not real, it was a replica of a semi-automatic. It also weirdly had a knife attached to the gun.”

Here is his booking record from the Los Angeles County Sheriff’s Department: 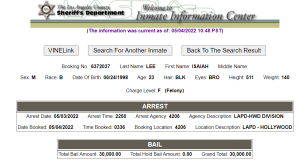 LA County SheriffIsaiah Lee was booked by the LAPD following the incident.

Lee’s booking information shows he was arrested shortly before 11 p.m. and booked at about 3:30 a.m. 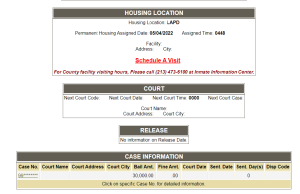 LA County SheriffIsaiah Lee was arrested shortly after the attack on Chappelle.

Lee’s bond was set at $30,000. An attorney was not immediately listed for Lee, and a date for his next court appearance has not been set.

Journalist Sharon Carpenter tweeted, “Dave Chappelle was just assaulted on stage at his Hollywood Bowl show. He was finishing up his performance when a man ran on-stage and lunged at him knocking him to the floor. Security & his entourage then cornered the man as Dave joked about him getting ‘stomped’ backstage.”

GettyDave Chappelle attends the Opening Night Party presented by NETFLIX IS A JOKE at W Hollywood on April 28, 2022 in Hollywood, California. Isaiah Lee, 23, is accused of attacking the comedian on stage days later.

Lee is an aspiring rapper who uses the name Noname_Trapper. In 2020, he released a track on YouTube called “Dave Chappelle.” The lyrics don’t specifically name Chappelle. The video had fewer than 6,000 views as of 3 p.m. Eastern time May 4.

The image on the YouTube video shows Lee standing on the hood of a police car in front of a Petco. His other tracks include “Trump Phone,” and “AFLAC.”

On “AFLAC,” Lee’s lyrics discuss a goose, and he says he can “make a dollar and double it.”

Isaiah Lee has been charged with felony assault with a deadly weapon, NBC Los Angeles reports. The LAPD told the news station the replica gun can “eject a knife blade … when you discharge it correctly.”

A motive for the attack has not yet been made public and little information about Lee has been released. He is being held in jail and it was not immediately clear if he has an attorney or spokesperson who could comment on his behalf. Heavy will update this report if a statement is released. Lee is listed in jail records as being 5’10” tall and weighing 140 pounds. His address is a Los Angeles homeless shelter, according to the New York Post.

Los Angeles County Jail records show Lee was arrested by the LAPD’s Hollywood Division at 11:50 p.m. local time and booked on May 4, 2022, at 3:36 a.m. A date and time for Lee’s first court appearance has not yet been set, according to the jail records viewed by Heavy.

3. Lee Shared a Video on His Instagram Story With a Devil Horns Filter Shortly Before the Attack

Lee’s Instagram page included a story posted shortly before the attack using a filter that made him appear to have devil horns, The Daily Beast reported. As of 3 p.m. Eastern time Wednesday, the page had no posts, two reels, and his profile picture blocked out his face underneath the words “angel face.”

“In an Instagram story posted to his page prior to the attack, Lee can be seen wearing the same sweatshirt he wore during the Chappelle ambush,” the Daily Beast reported. “It has no sound, and is just a few seconds long, but Lee filmed the clip with a filter that gives him what appear to be devil horns.”

The two reels show a hand tossing and catching a lighter, and a Mario game.

Chappelle carried on with the show after the incident, which was shared in videos that circulated on Twitter. “Dave Chappelle just got attacked on stage,” wrote Twitter account Hoodville.

The account shared a slo-mo video of the incident, which was circulating widely on social media in the moments after it happened.

Someone just ran on stage and attacked Dave Chappelle 😮 at the Hollywood Bowl in Los Angeles #netflixisajokefest #netflixisajoke pic.twitter.com/0WMUPQ7ks4

A 32-second version of the video was shared by Twitter user DoZay. It shows Chappelle reacting immediately after he was tackled. Another video shows fellow comedian Chris Rock joining Chappelle on stage after the attack. Rock, who was famously slapped at this year’s Oscars, joked, “Was that Will Smith?”

The video shows Rock hugging Chappelle on the stage.

4. Isaiah Lee Was Injured After Police Say He Attacked Chappelle, & Twitter Users Shared Video of the Alleged Attacker Being Loaded Into an Ambulance

Man That Attacked Dave Chappelle At His Show At Hollywood Bowl Has Hands Broken and Dislocated pic.twitter.com/ZvPgjdV5gz

Twitter users wrote that the man who attacked Chappelle was injured, and shared videos they claimed was the same person being loaded into an ambulance. Heavy could not immediately verify that the man in the videos was the person who tackled Chappelle. According to NBC Los Angeles, the LAPD said the suspect suffered “superficial injuries.”

“Shouldn’t have done that,” a voice can be heard saying to the man on the video.

Another video shows security guards patting down a man, who is up against a temporary wall beyond a barricade. At least one other person can be seen taking video of the incident, while several others look on from the public area.

BuzzFeed News reporter Brianna Sacks also shared a video from the scene on Twitter, writing, “Just came out of the Hollywood Bowl where a man charged and tackled Dave Chapelle on stage and got his a** kicked by at least 10 people. LAPD and LAFD are now loading him into an ambulance.”

Just came out of the Hollywood Bowl where a man charged and tackled Dave Chapelle on stage and got his ass kicked by at least 10 people.

LAPD and LAFD are now loading him into an ambulance pic.twitter.com/7SXPe9e8az

Sacks added, “The show was just ending when the man hopped onto stage and ran at Chapelle, tackling him to the ground. The comedian had literally just said he now has more security because of all the uproar from his jokes about the Trans community. Security et al rushed and started punching and kicking the s*** out of Chapelle’s attacker. He was just about to bring on Talib Kweli and Mos Def for the encore and we in the crowd were like what the f*** is going on. Chapelle kept on while the guy was getting beat in the back.”

Sacks added, “What is really surreal about this is that Chapelle talked about Chris Rock and the slap/new reality facing comedians/having more security with him and his wife being worried about him now. He did a whole bit about a crazy man coming to his house and chasing him down in his car. … While the attacker was getting beat up, Chapelle made a joke about him probably being a Trans man.”

5. Lee Was a Ward of the State & Taken Into the Care of His Grandmother, Who Died When He Was 14

Lee was a ward of the state before he was taken into the care of his grandmother, Joy Chatel, a community activist, according to a 2021 court filing related to her estate. Lee was listed in the court filing as having disabilities. It said he was “still mourning the loss and death of his mother with displacement anxieties.”

The estate was the subject of a community-based campaign led by his grandma, known as “Mama Joy,” according to The New York Preservation Archive Project. The estate was a part of abolitionist history, and she led a project to preserve the house. That future of that project was uncertain after she died suddenly in 2014, the organization’s website says.

Chappelle continued the show after the attack, and discussed the assault in a later video when he called Foxx on stage to join him. Chappelle first joked about his audience showing up at the end of his performance. “Oh, now everybody comes out for the curtain call,” he said.

He called Foxx onto the stage to a cheering crowd. “Whenever you’re in trouble, Jamie Foxx will show up in a sheriff’s hat,” Chappelle said.

Foxx joked that he thought the attack was a part of the show. “I grabbed the back of that ****** head,” Chappelle said. “His hair was spongy. Absorbent.” He said he had never seen anything like that happen before. “I’ve been doing this for 35 years. I just stomped a ***** backstage,” Chappelle said. “I’ve always wanted to do that.”

#DaveChappelle and security talking about him being attacked on stage. pic.twitter.com/OTsMH91Hq8

Foxx said Chappelle is a “genius” and that he needs to be protected in a video that shows Chappelle and Foxx discussing the incident at the end of the show.

“Listen, I just want to say…this man is an absolute genius. We’ve got to make sure we protect him at all times,” Foxx said. “For every comedian who comes out here, this means everything. You’re a genius. You’re a legend, and we’re not going to let nothing happen to you,” Foxx said.

Deadline reported that attendees were not permitted to bring their phones inside, so video of the incident was sparse.

“Apparently, Chappelle was rushed by someone while onstage. Attendees’ phones were confiscated at the gate, so video and even photos are very sparse, but one video posted seemed to show the man smashing into someone holding a microphone, possibly Chappelle,” Deadline wrote.

Loading more stories
wpDiscuz
0
0
Would love your thoughts, please comment.x
()
x
| Reply
Isaiah Lee was identified as the man who police say attacked Dave Chappelle live on stage during his Netflix is a Joke performance in Hollywood.