Getty Former U.S. President Donald Trump exits the stage after speaking during a rally hosted by the former president at the Delaware County Fairgrounds on April 23, 2022 in Delaware, Ohio.

Former President Donald Trump hosted a “Save America” rally on Saturday, April 23, 2022, in Delaware, Ohio. It was part of a series of “Save America” rallies that he’s hosting. Here’s a look at how many people attended Trump’s rally, including crowd size photos and updates about what happened. 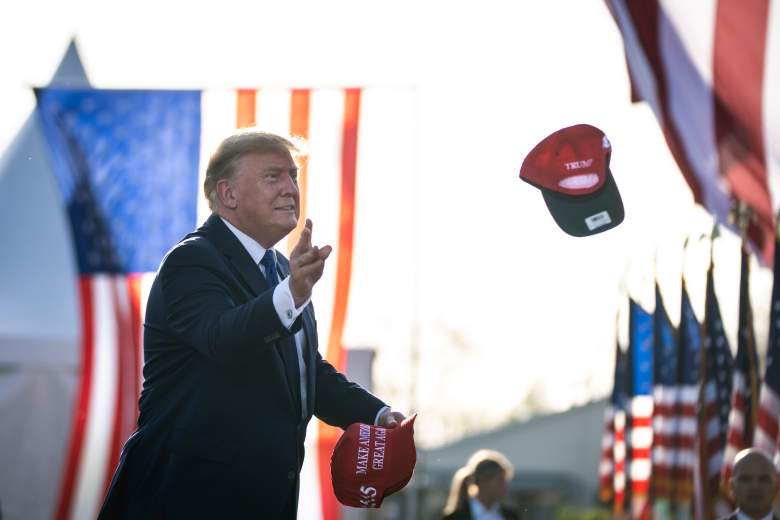 GettyFormer President Donald Trump tosses hats to the crowd as he arrives during a rally at the Delaware County Fairgrounds on April 23, 2022 in Delaware, Ohio.

“Thousands” of people attended the rally, which took place at the Delaware County Fairgrounds in Delaware, Ohio, Toledo Blade reported. Trump’s speech began around 7 p.m. Eastern, but people were allowed inside the venue beginning in the afternoon. Trump began his speech a few minutes early.

While an official crowd size estimate hasn’t yet been shared, reporters who were at the event seem divided on how many were there. Some believe it was a packed crowd, while others felt like it might have been a bit smaller than Trump’s past rallies. Most agreed that since the venue was so large, it was hard to estimate just how many attended and compare it to past rallies.

Jo Ingles, a reporter for Ohio Public Radio, tweeted that she didn’t know how many were attending, but “there’s a lot packed around the horse track.”

I have no idea how many people are here but there’s a lot packed around the horse track pic.twitter.com/fKiG5txfTm

She later said that Trump claimed the event broke the venue’s attendance records, but she would need to verify if that was true.

Mary Jane Sanese of the Ohio Statehouse News Bureau tweeted a video of the crowd, noting that Trump said the crowd “goes back as far as the eye can see.”

#DonaldTrump said the crowd goes back as far as the eye can see. #SaveAmerica #TrumpRally pic.twitter.com/cQENVtdjtd

Shortly before his speech began, she tweeted that “in addition to the main stage / blocked off sitting area, the crowd wraps around on each side and goes back.”

In addition to the main stage / blocked off sitting area, the crowd wraps around on each side and goes back. Here is a quick look at one side of the standing room area. The other side is just as crowded. #TrumpRally #SaveAmerica pic.twitter.com/0z3sP6jLTO

Here’s a look at the turnout about an hour before Trump took the stage.

Large turnout at the Delaware County Fairgrounds for former President Donald Trump. He should be taking the stage here in about an hour pic.twitter.com/Xu6CDR0R4H

Haley BeMiller of the USA Today Ohio network tweeted that the crowd feels a little “sparser” than the past rallies she’s attended, but the event was also spread out more, leaving more room to sit and stand.

This is my 7th Trump event, and I’m still bad at estimating crowd size. It feels a little sparser than past rallies, but sitting and standing room is also spread out among different areas. ¯_(ツ)_/¯ pic.twitter.com/UnIUeZI7a1

Liz Skalka of HuffPost tweeted that this “seems like the smallest crowd I’ve ever seen in Ohio for a Trump rally. I could be wrong, but it’s what the ~vibes~ are indicating. Hard to tell since this isn’t a seated venue.”

Just anecdotally, this definitely seems like the smallest crowd I’ve ever seen in Ohio for a Trump rally. I could be wrong, but it’s what the ~vibes~ are indicating. Hard to tell since this isn’t a seated venue.

During his speech, Trump gave a great deal of support to J.D. Vance, a venture capitalist running for Senate. He invited Vance to join him on stage partway through his speech, saying that Vance will “deliver a historic victory” even though Trump also likes some of his opponents. Trump noted that Vance had once criticized him, but: “If I went by that standard, I don’t think I would’ve endorsed anybody in the country.”

The rally is taking place shortly before the Ohio primary race on May 3, The Columbus Dispatch reported.

Before Trump’s speech, other Republicans spoke to the crowd, including Rep. Mike Carey, Rep. Troy Balderson, and Mike Lindell, The Columbus Dispatch reported.

During his speech, Trump also made a surprise endorsement for JR Majewski, running for the 9th District.

He didn’t put out a press release on the endorsement of @KeithFaber, but announced it on stage in Delaware County https://t.co/TZRXHXd2M7

Trump also said that he wanted “one day voting paper ballots” and not to allow any mail-in voting.

Trump says he wants “one day voting paper ballots” & no mail in voting. Ohio used to have a law that made it hard to vote by mail. After some voters spent more than 6 hrs in line in 2004 and others left because they couldn’t wait, Ohio lawmakers now allow no fault absentee voting

Trump has more events planned. According to his website, his next “Save America” rally will take place on Friday, April 29, at 8 p.m. Central in Greenwood, Nebraska. This one is scheduled to be held at the I-80 Speedway.

Trump is also going to begin taking part in an “American Freedom Tour,” which will include a stop in Austin, Texas, on May 14, KVUE reported. Donald Trump Jr., Kimberly Guilfoyle, Mike Pompeo, Dinesh D’Souza, and others are expected to also be there. The American Freedom Tour will also have a stop in Birmingham, Alabama, on June 18.

Trump has not yet announced if he is running in the 2024 presidential election. However, he did tell the crowd during his speech in South Carolina that “we may have to run again,” and added “we will take back the White House.” Trump made the same comments during his Georgia rally, saying that he might have to run again.