Jess and Colt, stars of the hit TLC series 90 Day Fiancé: Happily Ever After, got into an explosive fight during last week’s episode of the show after Jess found out Colt was still talking to his friend Vanessa. The Brazilian reality star stormed into their hotel room, ripped off her heels and threw them at Colt after Colt’s mother Debbie (purposely) let slip that Vanessa was cat-sitting for them in Las Vegas.

Jess then packed her bags, called a cab, and told Colt she was leaving to go sleep with her ex-boyfriend. Tonight’s episode of the show promises even more drama after Colt hears Jess return to the hotel with another man in the middle of the night. So what happens between the two? Does Jess cheat on Colt with her ex-boyfriend?

Keep reading for spoilers on what goes down between Colt and Jess during Episode 10 of 90 Day Fiancé: Happily Ever After, but be warned: MAJOR SPOILERS AHEAD! Turn back now if you don’t want anything ruined for you before the episode airs!

Jess Confronted Colt For Lying About His Relationship With Vanessa

Don't worry, she's just a friend…🤪 Tune in to a new #90DayFiance: Happily Ever After, TOMORROW at 8/7c. pic.twitter.com/1Ra6MEV4sP

For those who need a recap, Jess told Colt earlier this season that she didn’t want him to talk to Vanessa anymore. Although Colt told his girlfriend he cut off contact with Vanessa, the two remained friends and continued to talk in secret. He told the cameras that he felt bad lying to Jess, but he wasn’t willing to sacrifice his relationship with Vanessa because of Jess’ insecurities.

“Jess has never met Vanessa, she doesn’t even understand who Vanessa is, and she’s so jealous of her,” Colt says in the clip above. “I told Jess I wouldn’t talk to Vanessa anymore and it feels wrong to lie to Jess, but Vanessa is my best friend and she’s been there a lot longer than Jess has.”

Before they left for Brazil, Debbie and Colt had Vanessa over for dinner to thank her for watching their cats while they were gone. Colt never told Jess, and during a recent episode of the show, Debbie “accidentally” let it slip to Jess that Vanessa was cat sitting for them, which led to the explosive confrontation in the hotel room. In the clip below, Jess rips off both of her shoes and throws them at Colt before charging at him across the room.

“You lied! Again!” Jess screams while Colt tries to explain himself. “Vanessa talk, you still friends. You talk everyday!” She shoves his own phone in his face while trying to show him the messages and shouts, “You say ‘I don’t talk more. It’s not my friend.’ You lie!”

Jess then storms back out of the hotel room and when Colt chases after her, she shoves him and shouts, “I don’t want talk to you, go!” As Jess packs her bags, Colt tries to explain that he and Vanessa are just friends, but Jess cuts him off and tells Colt that she’s going to her ex-boyfriend’s house to “f–k another man” during her last night in Brazil.

Jess Returns to the Hotel With Another Man, But Not Her Ex 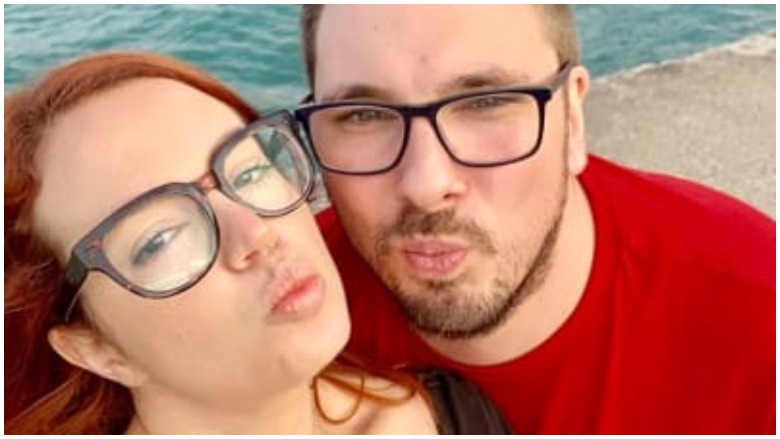 InstagramColt and Jess, stars of the hit reality series “90 Day Fiancé: Happily Ever After,” appear to be in a healthy, happy relationship. But are they still together?

During tonight’s episode of the show, Jess shows back up to the hotel room with a man, but it’s not her ex. Colt tells the cameras that he heard Jess come in around 2 a.m. and she was with a man, but it turned out to be hotel security escorting Jess back to the room.

“Last night, Jess and I had a huge fight, all over Vanessa babysitting the cats,” Colt tells the cameras. “She told me she was gonna go f–k her ex and then she left. At about 2 or 3 a.m. I heard a pounding at the door, and it was Jess, and some man was with her.” He adds, “I heard yelling, they’re talking in Portuguese, I didn’t know what was going on, and then I realized it was hotel security.”

He explains that she was still angry and raging about Vanessa, so he decided to get his own hotel room for the night. The next morning, Colt returns to their room to confront Jess about her behavior over Vanessa and her threat to sleep with her ex-boyfriend; when he asks if she cheated on him, Jess says no, and admits that she was angry and only said it to make Colt jealous.

“I say because you lie for me about Vanessa and I really angry,” Jess tells her boyfriend. Colt asks if that made her feel better, and she responds, “Yes, I just talk about my ex for you jealous. But I come back here. I no sleep with other man. I respect you.” The reality stars continue arguing about Jess’ outburst and Colt’s lies, but in the end they make up and decide to give their relationship another shot. (Heavy will add a clip as soon as one becomes available!)

READ NEXT: Colt & Jess Update on 90 Day Fiancé: Are They Still Together?