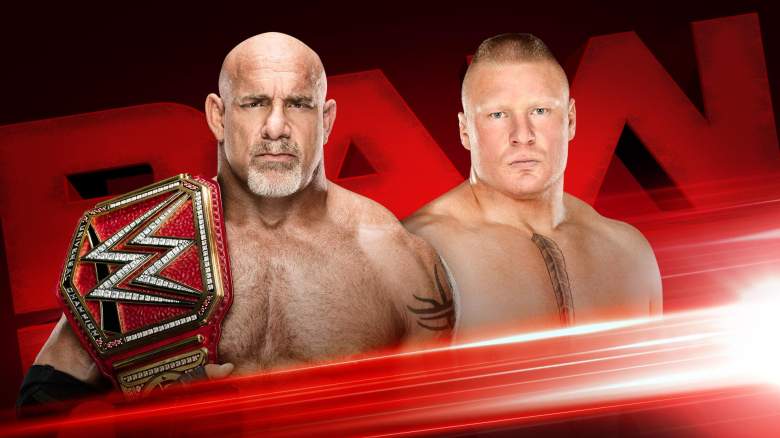 A new episode of Monday Night Raw is currently airing live on the USA Network. Here’s what has happened so far:

11:00 – Brock Lesnar enters with Paul Heyman. Heyman says that Brock Lesnar lusts after Goldberg’s Universal Championship title, and because of that, Lesnar is going to chew Goldberg up and spit him out. When the crowd chants “Goldberg,” Heyman says that this will be the final “Goldberg” chant on Monday Night Raw.

Goldberg enters. He says that people didn’t come here tonight to see them talk: they came to see them fight. Goldberg is ready to fight, and as he’s walking towards the ring, Brock Lesnar approaches him. Goldberg immediately delivers a spear. He stands in the ring victorious with his title as Brock Lesnar retreats.

10:54 – After the match, Chris Jericho adds Kevin Owens’ name to the list. Owens is very upset about this.

10:40 – Sami Zayn defeats Kevin Owens. This means that he will get to enter the Andre the Giant Memorial Battle Royal. Towards the end of the match, Samoa Joe runs out with the intention of interfering, but Chris Jericho soon follows him, fending off Joe and allowing Zayn to score the victory.

10:19 – Backstage, Kevin Owens says that despite what Chris Jericho said last week, Jericho was never his hero. He was a Chris Jericho fan to be sure, but now he realizes that was a huge mistake, Owens says.

9:58 – Roman Reigns enters. He says that in 2015, he won the Royal Rumble and went on to headline WrestleMania, but facing The Undertaker is the biggest moment of his career yet. Roman says he’s going to do what no other man has done: put The Undertaker down.

Suddenly, The Undertaker appears on the Jumbotron. He shows Roman an open grave and says that this right here will be Roman Reigns’ yard. He also has a full Roman Reigns tombstone sitting there, with his death date being April 2nd, 2017.

The Undertaker then appears in the ring. He tells Roman Reigns that at WrestleMania, he will rest in peace.

9:51 – Austin Aries backstage asks The New Day whether he will defeat Neville at WrestleMania. They predict that Austin Aries will win.

9:34 – Backstage, Cesaro and Sheamus are talking about WrestleMania when they’re suddenly attacked by Luke Gallows and Karl Anderson.

9:31 – Backstage, Roman Reigns says he refuses to be intimidated by The Undertaker. This entire show, we’ve seen shots of The Undertaker burying someone at a cemetery in between scenes.

Braun Strowman then enters. He says that if he wanted to, he’d come down and fight The Big Show right now, but instead, he’s going to do so at WrestleMania.

8:58 – Seth Rollins and Triple H participate in a contract signing. When Triple H enters, he says that if Rollins attacks him before the two of them sign this document, the match is off. He then explains that if Seth Rollins signs the contract, he’s giving up all of his rights, and it means that Triple H can do anything he wants to him at WrestleMania. He then goes off on a rant about how Seth Rollins think he’s morally superior when he’s not.

Seth Rollins tells Triple H that he’s gained a lot of perspective while at rehab, and he realized that he liked himself better before he met Triple H. Sure they accomplished a lot, but at what cost? Rollins says that for him, this WrestleMania match is about redemption, and about getting back to the person he was before he met Triple H.

Triple H then attacks Seth Rollins, pushing the desk into him and then going to hit Rollins with the crutch. But Rollins counters, and the two of them begin to brawl. Finally, Rollins throws Triple H over the top rope, and he begins to hit Triple H with the crutch. Rollins stands in the ring victorious as Triple H retreats.

8:37 – Backstage, Sami Zayn says it’s weird not having Mick Foley around anymore. However, he says it’s important that the Raw crew continue to honor his message, namely taking on challenges that seem insurmountable. With that in mind, Zayn says he’s joining the Andre the Giant Memorial Battle Royal, and he’s dedicating his performance to Mick Foley.

Stephanie McMahon enters. She says that under her regime, people have to earn their way into matches, and so tonight, Sami Zayn has to win a no disqualification match against Kevin Owens if he wants to go to WrestleMania.

8:15 – Sasha Banks and Bayley defeat Charlotte and Nia Jax. As Bayley and Sasha Banks are celebrating, Nia Jax attacks them. Nia then attacks Charlotte as well and stands in the ring over all three women victorious, holding up the Women’s Championship.

8:00 – Bayley opens the show. She says that WrestleMania is her favorite time of the year, and she used to get excited every year to watch it with her friends, but now she’s going to be in the show, which is very exciting.

Charlotte enters. She tells Bayley that she has become Sasha Banks’ pawn. Sasha Banks is merely pretending to be Bayley’s friend as a way of getting back in the title picture, Charlotte says. As proof, Charlotte pulls up an old tweet in which Sasha writes, “Keep your friends close and your enemies closer.”

Nia Jax enters. She says all these women are pathetic, but this Sunday, the Women’s Championship will finally have a permanent home. Charlotte says the only reason Nia Jax is even in this WrestleMania match is because Sasha stopped pretending to care about Bayley. Suddenly, Sasha attacks Charlotte, and Bayley attacks Nia Jax. The four begin to brawl, and we cut to commercial.