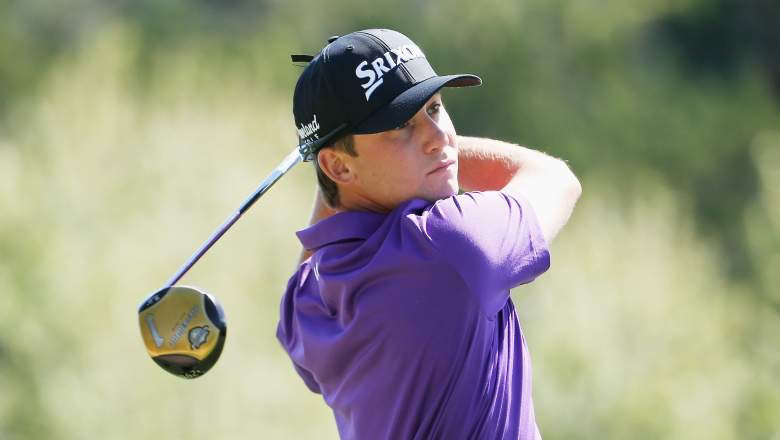 Smylie Kaufman has a lot to smile about lately.

The 24-year-old PGA Tour pro has put himself in position to the win the Masters, the first time he’s played golf’s major. He’ll playing in the final pairing at Augusta National with the reigning champion, Jordan Spieth.

The former amateur standout has climbed into the top 50 in the Official World Golf Rankings and the Top 10 in the 2016 PGA Tour money list.

Here’s what you need to know about Kaufman:

1. Smylie Is Not His First Name

Getting to know Smylie Kaufman – PGA TOUR RookieAlready tasting victory on the PGA TOUR at the 2015 Shriners Hospitals for Children Open, Smylie Kaufman talks about his path to the PGA TOUR and his golf idols growing up. Follow Smylie on… TWITTER twitter.com/SmylieKaufman10 instagram.com/smyliekaufman10/ . SUBSCRIBE to PGA TOUR now: pgat.us/vBxcZSh Welcome to the official YouTube channel of the PGA TOUR. Here…2015-12-30T16:00:00.000Z

His middle name is an homage to his grandmother’s cousin. He was Smylie Gebhart and was a All-American defensive end for Georgia Tech in 1971.

Gebhart suffered an accident in 1980 which severed his spinal cord and left him a quadriplegic. Gebhart died when he was 51.

An incredible working guy, and to think of what he went through … I just always knew that if I ever had a son, it was going to be Smylie.

His parents are Jeff and Pam Kaufman.

2. He Is From Alabama

Smylie Kaufman at home in AlabamaAfter tasting victory early in his rookie campaign, Smylie Kaufman is beaming with confidence. We hung out with Smylie in his hometown of Birmingham, Alabama, as he gave us an inside look at his childhood and where he spread his roots. . SUBSCRIBE to PGA TOUR now: pgat.us/vBxcZSh Welcome to the official YouTube channel of…2016-02-17T00:39:27.000Z

The Kaufmans are from Vestavia Hills, Alabama, a suburb of Birmingham.

Smylie was a standout amateur golfer and won the 2011 Alabama Amateur.

He began playing golf at a young age and was winning local tournaments before he was a teenager.

Smylie also helped lead Vestavia Hills High School to the 6A basketball championship in 2009. He graduated in 2010.

And while he’s made millions on the Tour already, Smylie still lives at home with his parents when he’s not travelling. But he is looking for a house.

Smylie’s mother Pam used to coach the women’s golf team at nearby Alabama-Birmingham in the 1990s.

Kaufman signed with LSU coming out of high school as the 21st-ranked recruit by Golfweek.

He had six top 5 finishes and nine top 10 finishes in his 28 appearances at LSU. Kaufman lettered all four years.

Kaufman took second place in the 2014 SEC Championships as a senior.

He graduated in 2014 with a degree in marketing, but he turned professional right after college.

Highlights | Smylie Kaufman’s 61 leads to maiden victory at ShrinersIn the final round of the 2015 Shriners Hospitals for Children Open, Smylie Kaufman cards a bogey-free 10-under 61 to earn his first PGA TOUR win. . SUBSCRIBE to PGA TOUR now: pgat.us/vBxcZSh Welcome to the official YouTube channel of the PGA TOUR. Here you can find everything you need to stay up to date…2015-10-26T02:11:42.000Z

Kaufman picked up his first PGA Tour win at the Shriners Hospital for Children Open in October 2015. He held off 6 players for a one stroke lead at 16-under.

The 2016 Masters is the first time playing the event and it’s only his second major. He played in the 2014 U.S. Open, but missed the cut. Now Kaufman is in contention for the Green Jacket.

Kaufman also had one win on the Web.com Tour. He took the United Leasing Championship by five strokes in May 2015.

5. Kaufman Is Ranked In the Top 10 of the FedExCup Standings

Smylie Kaufman's brilliant water shot at Waste ManagementIn the second round of the 2016 Waste Management Phoenix Open, Smylie Kaufman hits his second shot from the water eventually rolling in a putt for par on the par-4 17th hole. . SUBSCRIBE to PGA TOUR now: pgat.us/vBxcZSh Welcome to the official YouTube channel of the PGA TOUR. Here you can find everything you…2016-02-06T01:06:02.000Z

Kaufman is having a fantastic 2015-16 season thus far.

Here’s a look at his numbers, courtesy of PGATour.com:

So we’ll leave you with this from Wednesday’s Par-3 Contest at the 2016 Masters:

Read More
5 Fast Facts, Golf, Masters 2016, PGA Tour
Smylie Kaufman is making a name for himself at the 2016 Masters. Get to know the PGA Tour pro better here.