If fantasy football players looked ahead on their schedule, Week 9 is the one they've been dreading. There are six teams on a bye, and while that's the same amount as last week, the fantasy impact is likely going to much more significant this time around. The New England Patriots, Arizona Cardinals, Cincinnati Bengals, Chicago Bears, Houston Texans and Washington Redskins are all off this week, which means--in terms of points per game in ESPN standard leagues--the absence of fantasy football's top QB (Tom Brady), top RB (David Johnson), top TE (Rob Gronkowski) and No. 3 WR (A.J. Green). That's just the tip of the iceberg, too, as owners will be without the likes of Andy Dalton, Kirk Cousins, LeGarrette Blount, Lamar Miller, Larry Fitzgerald, DeAndre Hopkins, Julian Edelman, Alshon Jeffery, Jordan Reed, Tyler Eifert and other important pieces. Filling out lineups could get difficult in Week 9, but we're here to help. You can click through the gallery for some under-the-radar options to start, as well as some players to keep on your bench if you're lucky enough to have some depth this week. (Getty) 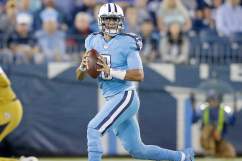