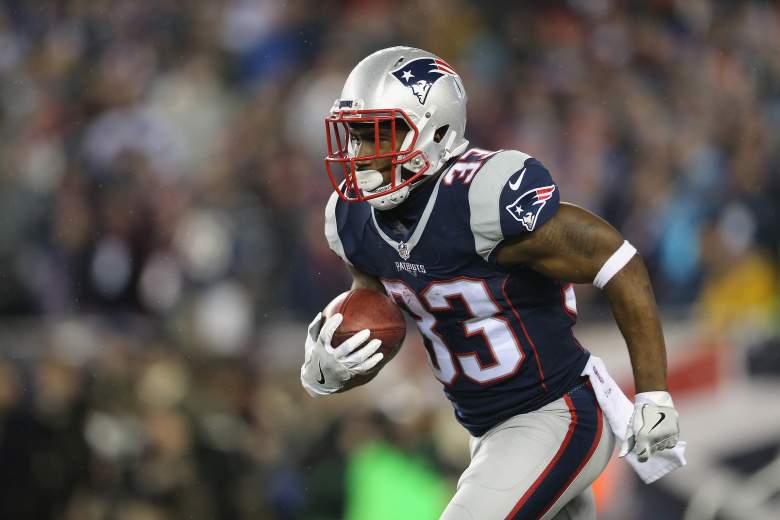 Dion Lewis during the AFC Championship game against the Steelers. (Getty)

Dion Lewis is one of five running backs on the New England Patriots roster and played in his first Super Bowl on February 5. The Patriots still haven’t lost a game that Lewis has been involved in, including Super Bowl LI.

In four NFL seasons, the Patriots are Lewis’ fourth team, but just the second he’s actually been able to play for.

Unfortunately, the 26-year-old Lewis’ two seasons with the Patriots so far have been plagued with injuries. He didn’t play in his first game of 2016 until November 20 against the San Francisco 49ers. His best game of the season was on December 18, when the Patriots beat the Denver Broncos 16-3. In that game, he rushed for 95 yards on 18 carries, averaging 5.28 yards per carry. He also caught two passes for nine yards in the game.

Lewis finished the regular season with 283 rushing yards in seven games on 64 carries. Lewis is listed at 5 ft 8 in. and 195 pounds.

Here’s a look at Lewis.

1. The Patriots Still Haven’t Lost a Game Lewis Has Played In, Including Super Bowl LI

Lewis’ statistics might not stand out, but he’s played a key role for the Patriots in the second half of the season. The Patriots never lost a game he was involved in, including their postseason wins over the Texans and Steelers. After Super Bowl LI, the Patriots are 17-0 in games involving Lewis.

This weird streak goes back to 2015, too. He only played in eight regular season games in 2015, and the Patriots won ever single one of them.

Before playing for the Patriots, Lewis was forced to sit out the 2013 and 2014 seasons. When he was in Philadelphia, the Eagles only won eight games he played in during the 2011 and 2012 seasons.

After the 2012 season, Lewis was sent to the Cleveland Browns, but never played a snap thanks to a fractured fibula. He was cut in August 2014. A few weeks later, the Indianapolis Colts signed him, but he was released on September 16, 2014.

During the last play of regulation, the Patriots tried a trick play, which ended badly when Lewis went down on the sideline. He told the media after the game that he tweaked his hamstring and it wasn’t as bad as it looked. 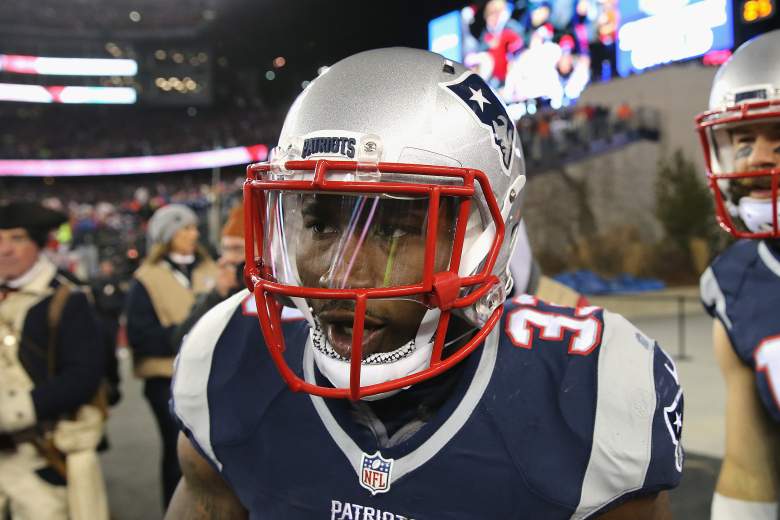 After just three games into the 2015 season, the Patriots locked up Lewis for the 2016 and 2017 seasons. He was originally signed to a future/reserve one-year contract.

The NFL Network reported that the deal is worth $3 million, and can be worth up to $5 million with the incentives.

“It was a good feeling,” Lewis told NESN about the contract. “Still got a lot of work to do. Just trying to stay focused and get ready for this week.”

3. Lewis Became the First Ever Player to Score a Rushing, Receiving & Return Touchdown in a Playoff Game 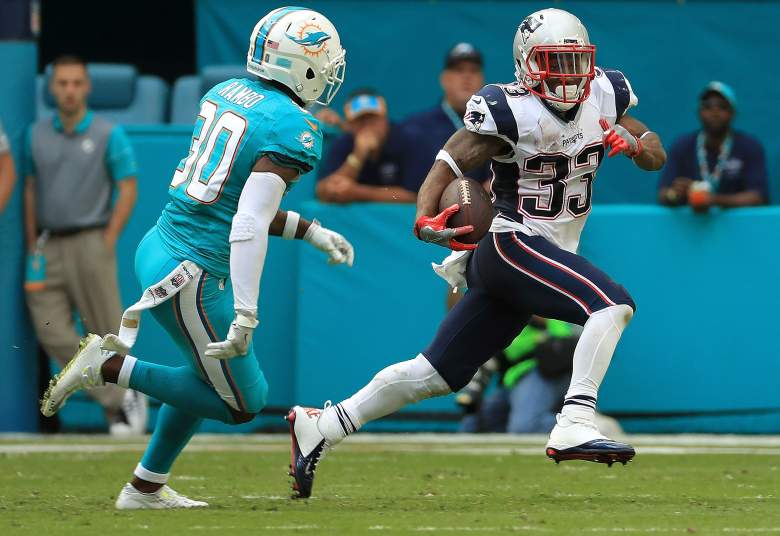 The Patriots’ 34-16 win over the Houston Texans during the divisional round in January wasn’t pretty, but Lewis was easily one of the stars for the team. As ESPN pointed out, he became the first player in NFL history to score a rushing, receiving and return touchdown in the same playoff game. The Kansas City Chiefs’ Tyreek Hill pulled it off last year, but that was during a regular season game.

Lewis finished the Texans game with 41 yards on 13 carries, butt his highlight of the night was a monster, 98-yard kickoff return for a touchdown. It came just seconds after he scored his receiving touchdown from a 13-yard Tom Brady pass. During the fourth quarter, he had a 1-yard touchdown run for the rushing TD.

“It was a great return and great execution. The guys made their blocks,” Lewis told ESPN of the return touchdown. “All season since I’ve been back, I knew we’d get one but just haven’t had too many opportunities to take it out with all those deep kicks. But we knew there was going to be opportunities, and I hit it. The guys did a great job for me.”

Unfortunately, during the game, he also fumbled a kickoff return in the second quarter. The Texans ended that drive with a touchdown.

During the AFC Championship, Lewis only had 11 yards on six carries against the Steelers, but he did have two receptions for eight yards.

4. Lewis Was Considered a Heisman Trophy Candidate for His Freshman Year at he University of Pittsburgh

The Albany, New York native was a standout running back at the University of Pittsburgh, earning Big East Rookie of the Year and Big East Offensive Player of the Year in 2009. During that rookie season, he rushed for 1,799 yards on 325 attempts and averaged 5.5 yards per carry. He had 17 rushing touchdowns, and added a receiving touchdown to go with it. He broke the Big East freshman rushing record previously held by Tony Dorsett.

As a sophomore in 2010, Lewis rushed for 1,061 yards on 219 attempts, with 13 touchdowns. He declared himself eligible for the 2011 NFL Draft and was picked by the Eagles in the fifth round.

5. Lewis Thinks The Patriots’ Win Streak With Him Playing is ‘Just a Coincidence’ 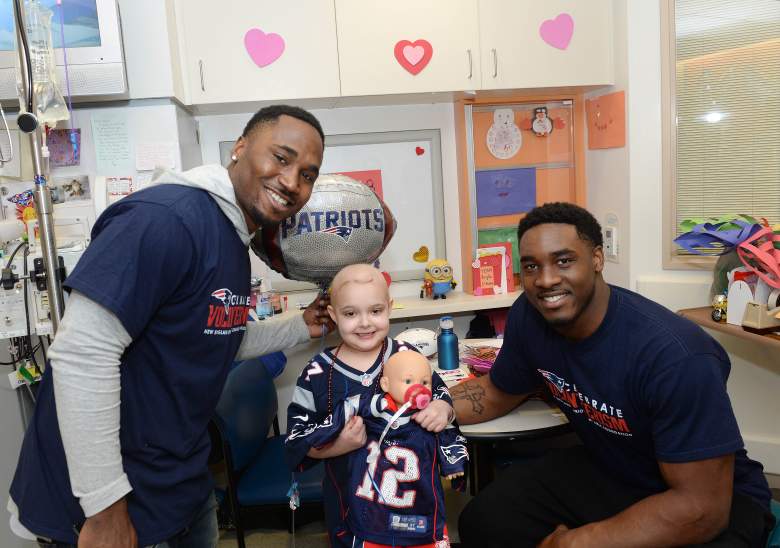 Lewis is convinced that streak with him playing or being active is only a coincidence. “I don’t pay attention to that. It’s just a coincidence,” he told the Houston Chronicle. “Coincidence.”

He told the Chronicle that he’s missed a lot of games too. “I missed like 16 games, too, though,” he told the media. “I just try to stay healthy, and I’m happy to be out there. But that’s not because of me, though. It just happens to be that way.”

“I’m on a great team, I’ve got great teammates, a great coach and a great quarterback,” Lewis told the New York Times. “It ain’t me, believe that.”