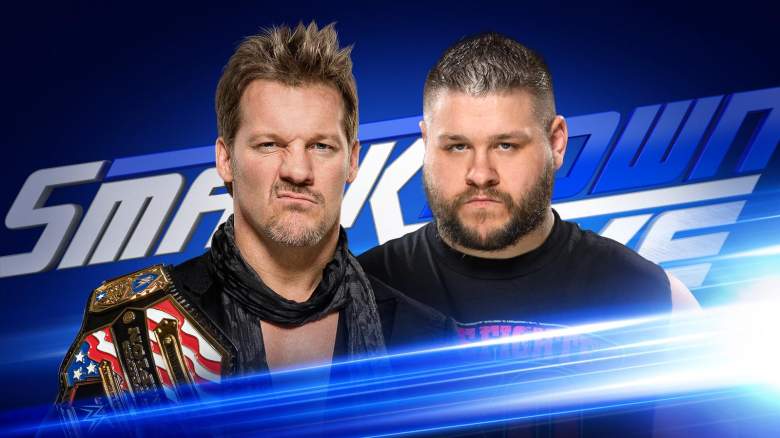 A new episode of SmackDown Live just aired on the USA Network. Here’s what happened:

9:56 – After the match, paramedics examine Chris Jericho. Kevin Owens then runs into the ring and continues to attack Chris Jericho even more.

9:32 – In a Law and Order parody segment, Tyler Breeze and Fandango target The Usos, especially insulting their outfits and saying that they will deliver punishment on May 21st at Backlash.

9:12 – After the match, Becky Lynch runs in and looks to be joining forces with Natalya, Carmella, and Tamina, shaking their hands and saying, “I’m in.” But then this turns out to be a fakeout, and she attacks all three women. Natalya, Carmella and Tamina team up to attack Becky Lynch, and they stand in the ring victorious.

8:59 – Carmella and Natalya defeat Charlotte and Naomi. This starts off as a two-on-one match, with Naomi on her own and Charlotte being missing-in-action following the backstage attack earlier in the night. But Charlotte soon shows up and joins the match. Ultimately, Carmella is able to pin Naomi after James Ellsworth distracts Naomi.

8:51 – Backstage, Charlotte says that all Natalya, Tamina, and Carmella did last week is delayed the inevitable, namely the fact that Charlotte will become Women’s Champion. Carmella, Tamina and Natalya suddenly appear and attack Charlotte.

8:49 – Backstage, Chris Jericho is being interviewed by Renee Young when Aiden English walks by crying. Jericho cheers him up before adding him to the list, because that’s what happens when you cry on Chris Jericho’s new show. He also adds Renee Young to the list for no apparent reason.

8:40 – Aiden English starts singing in the ring, but he’s interrupted by Tye Dillinger.

8:39 – Backstage, Dolph Ziggler watches a Shinsuke Nakamura promo. Ziggler says that it’s a big surprise that Nakamura isn’t here tonight, and Ziggler says he can’t believe a whole pay-per-view is being built around Nakamura even though he can’t be bothered to show his face tonight. Shane McMahon overhears Ziggler, and he steps in to defend Nakamura.

8:32 – Backstage, Becky Lynch runs into Natalya, Carmella, Tamina and James Ellsworth. Natalya says that they’re trying so hard to protect Becky from being burnt by Charlotte. Natalya adds that if anyone should be getting title matches, it should be Becky, but no one has her back around here. Natalya encourages Becky to join them, and she says that they’ll protect her if she does. Becky says she’ll think about it.

8:17 – After the break, it is announced that AJ Styles will be banned from ringside during the U.S. Championship rematch tonight.

8:02 – Shane McMahon enters. He introduces Chris Jericho, the newest member of SmackDown Live. Jericho enters. Jericho says that this is the new Show of Jericho…smack it down, man! McMahon says that Jericho tonight will be defending the U.S. Championship against Kevin Owens.

AJ Styles enters. He addresses Chris Jericho as his old friend turned bitter enemy, and he says that a lot has changed since they were last on the same show. This, he says, is the house that AJ. Styles built. Styles says that he doesn’t forgive and doesn’t forget, and so nothing would please him more than to take Jericho’s U.S. title away…that is, if Jericho is even still champion by the end of tonight. Jericho is about to add Styles to the List of Jericho when he’s interrupted by Kevin Owens’ theme.

Kevin Owens enters. He says that this is the most pathetic thing he’s ever seen, and tonight, he will take back the United States Championship. If Jericho thought the Festival of Friendship was bad, he has no idea what’s coming tonight, Owens says. Owens also tells AJ Styles to get the hell out of his ring. AJ Styles leaves the ring and goes right after Kevin Owens, attacking him until he’s pulled away by the referees.