Getty Adam Rippon of the United States skates in the Men's Free Skate program during the 2016 World Figure Skating Championships.

Adam Rippon is a veteran among a youthful crop of talent in men’s figure skating. The 27-year-old has competed in eight straight U.S. Championships before sitting out this past season due to injury.

He’s now entering a crucial season in his career as the PyeongChang Olympics appear to be his last realistic shot at an Olympic team.

Here’s more on the American figure skater on and off the ice:

The talented figure skater from Clarks Summit, Pennsylvania began skating when he was ten years old, which is considered a late start in the sport.

Although he had been on the ice before, it never piqued his interest.

“I was never interested in skating when I was younger,” he told Absolute Skating. “I tried it a few times every winter and when I had become a little older, I was finally in love.”

His mother’s passion for figure skating is what eventually opened his eyes.

“My mother used to skate and she took me along to the rink,” he told Skate Today. “I didn’t really like it at first, but grew to love it. I have five brothers and sisters, but I’m the only skater. One of my brothers is on the school track team and another brother and my sister are in gymnastics, which I did as well when I was little.”

Three years after his first lesson, he was already landing triples. His first triple jump was a triple salchow.

“I have always loved her,” he told Absolute Skating in 2010. “I did have the chance to meet her at Ice All Stars in Korea this past summer. She was so nice! When I had the chance to be in a practice with her, I made sure to just watch her skate around and just soak in the experience.”

2. Rippon Is Coached By Rafael Arutyunyan

Rippon has been through several coaching transitions in his skating career. He was coached by Yelena Sergeeva from 2000 to 2007. In the fall of 2008, he moved to Canada to train with Brian Orser.

In April 2011, he ended his two-year professional relationship with Orser and announced he would train full-time with Ghislain Briand, who had served as a member of his coaching staff.

However two months later, Rippon would make another coaching switch. On June 16, 2011, Rippon announced he was leaving Canada and returning to train in the United States at the Detroit Skating Club, and began training under the charge of Jason Dungjen.

In September 2012, Rippon announced he would be moving to train with Rafael Arutyunyan in Lake Arrowhead, California.

“After the world championships, I had time to reflect on the season and came to the conclusion that I needed to take a different approach,” Rippon told Ice Network. “Over the summer, I received the suggestion to travel to Lake Arrowhead and work with Rafael. I’m confident the move will be a positive one as I move forward in my career.

“I am very grateful to Jason and Yuka for their unconditional support and encouragement, which brought me to my first U.S. medal at the senior level.”

Arutunian, a former national competitor for the Soviet Union, has worked with Mao Asada, Michelle Kwan, and Sasha Cohen, among others.

GettyAdam Rippon reacts to his score after competing in the men’s free skate at the 2016 Prudential U.S. Figure Skating Championship.

Although he fell out of his first jump— the quad lutz— he landed four lutzes, three axels and two toe loops. Rippon was the only top contender to not land a quad.

“After the first jump I reminded myself that I’m a warrior,” Adam shared with the press. “I can’t believe it’s a reality.”

Nathan Chen, Rippon’s training partner, placed third despite despite becoming the first American man to complete four quads in one program. Max Aaron, who claimed silver, had two quads in his free skate.

GettyFigure skaters Ashley Wagner (L) and Adam Rippon pose together at the 2017 BODY at ESPYs Party.

He told the Daily Burn that their friendship strengthens their training.

“In a competitive sport, you use a lot of external factors to motivate you,” he explained. “The kind of skate you want to have, a certain placement. It’s good to have those external motivators, but the core reasons really need to be personal. And we remind each other of that daily.”

He appeared on the cover of Skating magazine with Wagner in October 2015.

In the magazine, which is the U.S. Figure Skating’s official magazine, Rippon discussed being gay, stating:

It’s the year 2015. So many more athletes are willing to be open, and it’s part of the culture now to be more open about who you are and what your interests are. Of course people are interested in your sexual orientation. People love rumors. When athletes come out and say that they’re gay, it makes it a little more normal and less of a big deal — especially in the athletic community. You have a lot of respect for your fellow athletes for working hard toward a goal. Their sexual orientation takes a backseat to that.

5. His Signature Move Is the ‘Rippon Lutz’

Rippon is known for his creative choreography. The 27-year-old skater even has a move named after him— the “Rippon lutz”— where he raises both his arms above his head while doing a triple lutz.

“It was a time where a lot of quads weren’t being done so a lot of men were doing the same triples. I wanted to do something that would set me apart,” he told the Daily Burn of the jump’s origin. “1988 Olympic Champion Brian Boitano was famous for doing a lutz with one arm over his head. And I wanted to build on that.”

The element started out as a joke while Rippon was practicing.

“It did start out as a joke,” Rippon told Absolute Skating. “Brian (Orser) saw that I was trying a single lutz with both hands up and he started laughing, saying, ‘If you can do it with one arm, why not two!’. I started thinking, ‘why not?’. The first few I tried were very scary, but I got the timing pretty soon. I love having an element named after me.” 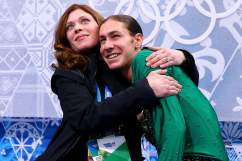