Getty Carson Wentz is listed as questionable with a head injury.

Carson Wentz headed to the locker room towards the end of the first quarter of the Seahawks-Eagles playoff game to be evaluated for a head injury. NBC Sports reported that Wentz was originally listed as questionable to return as he was being evaluated for the head injury.

NBC’s Michele Tafoya reported after halftime that Wentz has been ruled out. The initial reports did not sound promising when it came to Wentz returning.

“Sal Paolantonio reports that Carson Wentz’s wife has been escorted to Eagles locker area. Once Wentz was removed from medical tent to locker room for further concussion testing, it raised level of concern for @Eagles. It’s a medical decision. No official word yet,” ESPN’s Chris Mortenson reported.

Wentz initially remained in the game but was taken to the locker room after he did not look like himself on the sideline.

“Eagles QB Carson Wentz is officially declared out with a head injury. He is done for the day, and once again, Philly’s backup QB enters the spotlight,” NFL Network’s Ian Rapoport tweeted.

Replays showed Wentz take a shot to the back and his head hit the turf on a tackle by Seahawks pass rusher Jadeveon Clowney. It is an unfortunate break for Wentz who was playing in his first postseason game after missing the prior Philadelphia playoff runs with injuries. Leading up to the Wild Card game, Wentz described himself as “grateful” to be able to finally play in the postseason.

“I’m grateful to be healthy and be in this moment with these guys, to be on the field,” Wentz said this week, per The Washington Post. “I’m just excited for the challenge. I’ve been on the sidelines the last few years for these games, so I’m pretty pumped for the opportunity.”

Here is a look at the play where the injury is believed to have occurred.

The Carson Wentz head injury happened on this hit by Jadeveon Clowney pic.twitter.com/08VrYddOTV

Josh McCown Is Filling in as the Eagles Quarterback vs. Seahawks

Greg Ward is throwing passes on the sideline to be ready in case Josh McCown can’t#Eagles pic.twitter.com/yU397uHu4L

“Why can’t he? He’s active, he’s dressed,” Pederson said, per ESPN. “He’s actually done that in a game before — in his career he has done that. Now, it has been about 10 years ago, but he has lined up as a receiver in an actual football game.”

NBC Sports’ John Clark reported that Greg Ward has also been warming up in case something happens to McCown. Ward has been playing wide receiver for the Eagles, but was a quarterback while in college at the University of Houston.

“Greg Ward is throwing passes on the sideline to be ready in case Josh McCown can’t #Eagles,” Clark tweeted.

Some Are Calling Clowney’s Hit a “Cheapshot”

Carson Wentz left the game after this hit from Jadeveon Clowney and is questionable to return with a head injury. pic.twitter.com/I8LkbEcF5I

Replays showed Clowney’s helmet appeared to collide with Wentz’s helmet. Some members of the Eagles’ media are calling it a “cheapshot” by Clowney.

Brandon Graham Is Also Being Evaluated For an Injury

Brandon Graham is running off to the side line pic.twitter.com/LtwGmb5yyL

The injuries continue to pile up for the Eagles as defensive end Brandon Graham also headed to the locker room to be evaluated for an injury. Running back Miles Sanders also went down on the final play before halftime. The Athletic’s Zach Berman reported that Graham was seen back on the sideline with his helmet but had not returned as of the second quarter.

“Brandon Graham hasn’t returned to the game since he was evaluated for injury. He’s on the sideline with his helmet, but Eagles have go with Barnett/Curry/Sweat,” Berman tweeted. 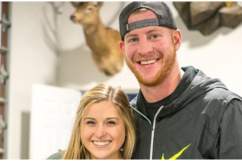