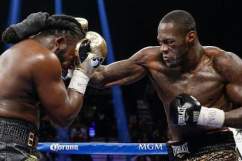 Once celebrated as the premier fighters in the sport, stateside heavyweights have taken a backseat to today’s lighter weight glamour divisions. This weekend the big boys will have the opportunity to steal back the spotlight when Stiverne puts his title on the line against Wilder’s undefeated record.

Here is what you need to know for Saturday’s shootout. 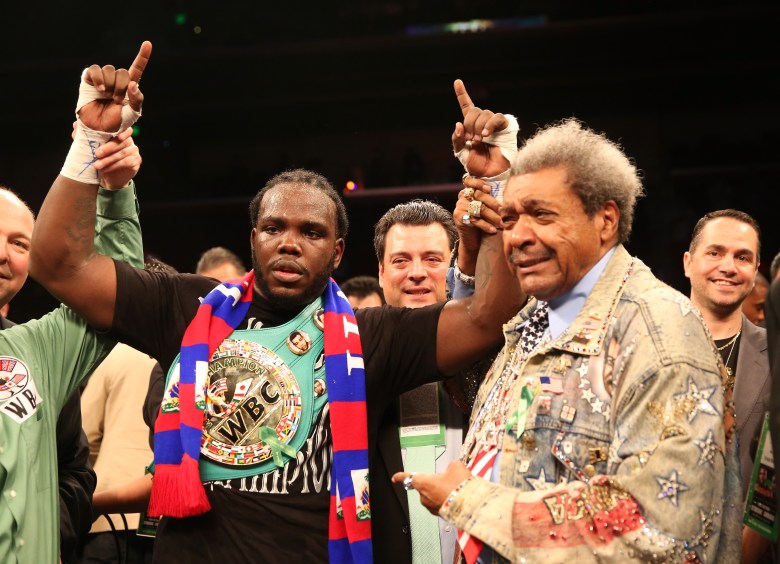 Eight years after turning pro and steadily working his way up the division rankings, Bermane Stiverne (24-1-1, 21 KOs) decisioned Chris Arreola in a WBC eliminator bout back in April 2013, making him the mandatory challenger for then-champion Vitali Klitschko’s WBC heavyweight title.

However, when Klitschko retired before the fight could take place, the sanctioning organization ordered a second meeting between Stiverne and Chris Arreola, then ranked numbers one and two, to fill the vacant title.

On Saturday, Stiverne will get a chance to make a statement by defending his belt against arguably today’s biggest puncher, Deontay Wilder (32-0, 32 KOs).

“Defending my title in Vegas at the MGM Grand is a dream,” Stiverne said. “Nobody will beat me. This belt isn’t going anywhere. January 17 is going to be a short night and it’s going to be painful.”

2. Deontay Wilder Has a Perfect Record, But Against Questionable Opposition 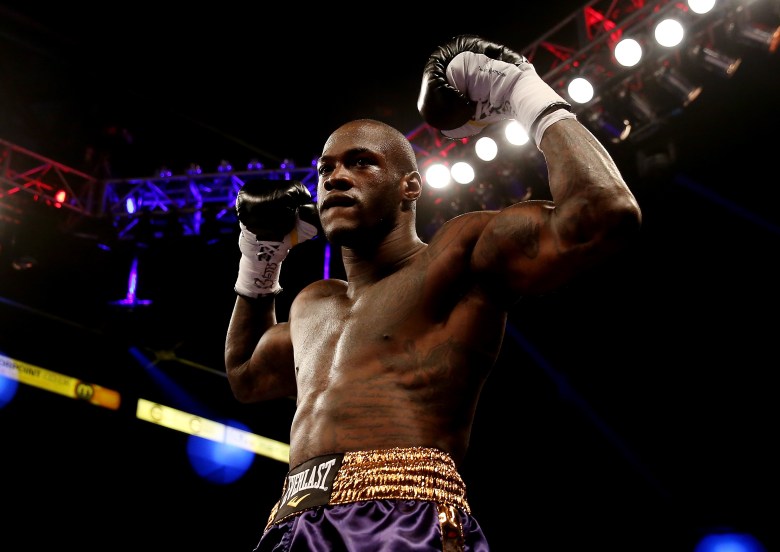 On paper, Deontay Wilder’s professional record is outstanding– 32 fights with 32 knockouts; 18 of those coming within the first round.  With only four of his bouts making it into the fourth-round, the 2008 Olympic medalist’s fights average only 1.8 rounds.

But a closer look at his opposition reveals a record built against regional club-fighters, journeymen, and late-30s has-been contenders.

Up-and-coming prospects, just starting their careers, gain valuable experience by taking on a few easy-win fights before eventually stepping up the opposition level. However, Wilder’s failure to advance past low-level mismatches has held back his development and has possibly kept him from reaching his potential.

Observers point out that the Tuscaloosa native enters the bout untested, and having never truly tasted the power of a top-level puncher. Bermane Stiverne, by far, presents Wilder’s toughest challenge to date. By getting past him, Wilder would finally prove he is more than just an undercard sideshow.

“I have heard nothing but excuses for my 32 wins by KO and when I get 33, I don’t want to hear anything about it,” said Wilder. “I have no doubt at the end of this fight my hand will be raised as the new heavyweight champion of the world.” 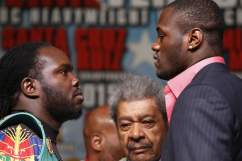 Deontay Wilder: ‘I’ve Never Been So Ready to Whoop a Man’ 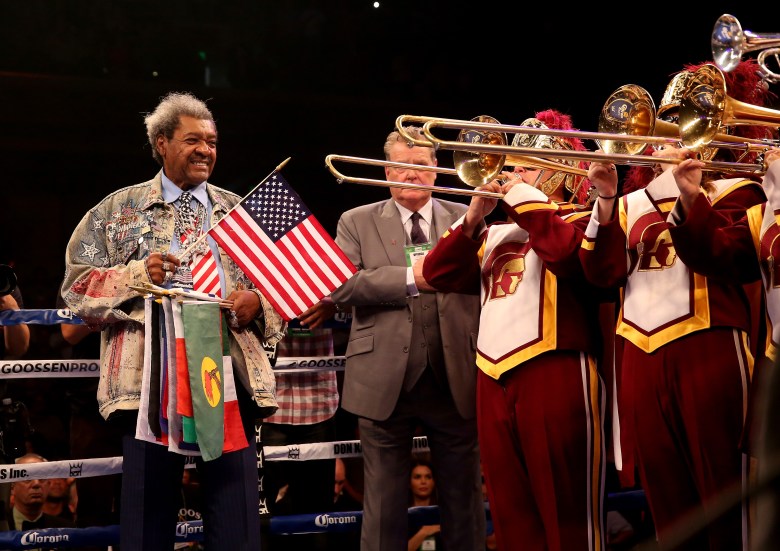 For three decades, the name Don King was synonymous with boxing. Establishing himself as the man behind Ali and Foreman’s “The Rumble in the Jungle” in 1974, King went on to promote the legendary likes of Félix Trinidad, Evander Holyfield, and Julio César Chávez; and built a boxing empire, with a personal worth of over $150 million.

However, recent internal power-shifts and alliances within the boxing world left ‘The Don’ out of the picture, and his former kingdom has been reduced to a handful of loyal employees and a sparse roster of B-level boxers competing in insignificant bouts.

Bermane Stiverne joined up with King Promotions when he turned professional in 2005, and despite King’s current lack of influence, the two have risen together to the top of sport. Once again, the Hall of Fame promoter finds himself in the public eye, and a win on Saturday could put the old king back a position of power.

Sporting his customary hair, denim jacket, and waving his American flags, King has hardly lost his gift for doling out the wisdom with bravado and extravagance.

“This is a fight to bring boxing and the country back to where it should be,” Don King said. “And being able to bring the glory back to the heavyweight division, which has been lacking for quite a while now!”

4. Styles Make Fights: The Compact Power-Puncher vs. The Tall Slugger 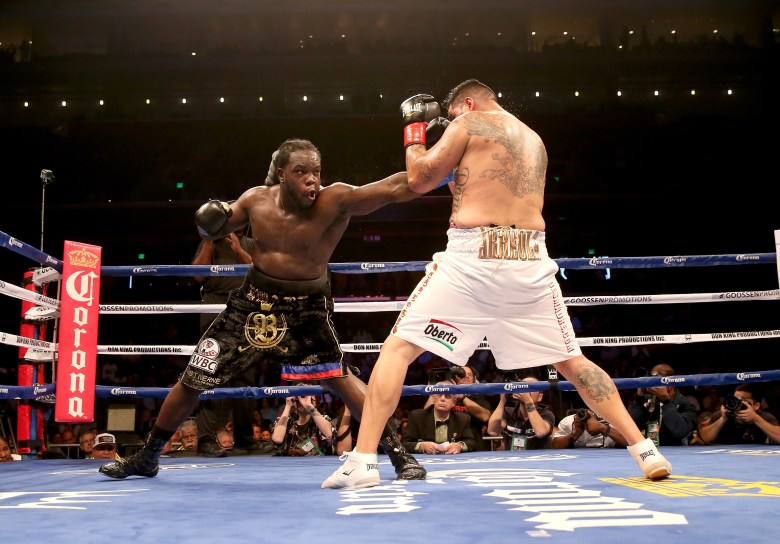 Stiverne is a thick-necked endomorph who resembles a linebacker more than he does a champion prizefighter. Standing at only 6’2”, he is on the small side for a heavyweight. But the 36-year-old makes up for any height disadvantage with his sturdy 240-pound build, his strength, and a respectable 80-inch reach. The man is built to take it, as well as to dish it out.

Stiverne is an adaptable power-puncher who works off an educated jab, single punches, and short combinations. He boxes out of a short herky-jerky rhythm, behind a tight guard; though he can adjust to work at a slower pace, while shooting jabs from the hip, as he did against Chris Arreola.

He can effectively work from close quarters, but prefers to dispense from the outside; and is comfortable moving both forward or backwards.

Stiverne wields a crisp, versatile jab and possesses devastating power in both hands. He punches well to the body and displays good mobility, especially for a man of his stature. He applies his pressure subtly through feints and head movement, and foot work and generalship.

Where Stiverne lacks most is in his defensive game, which consists mostly of slipping and moving out of range to dodge punches. When up against the ropes Stiverne’s approach is limited to shelling up behind his gloves and taking the punishment while waiting for an opportunity to escape. Although Stiverne has a first-rate chin, he has a propensity to over-utilize the face-block technique, and takes more punches than he should.

The Bronze Bomber is a tall, muscular slugger; boasting, at 6’7”, a five-inch height and three-inch reach advantage over Bermane Stiverne.

Wilder, 29 years old, is a one-punch knockout specialist who selectively hammers away at his opponents with single jabs, waiting to create openings for his fight-ending right hand. Despite his explosive power and quick work over his opponents, Wilder is a patient and controlled fighter, beginning his fights probing and observing before opening up and demolishing his rivals.

Wilder fights out of classic stance, with his lead foot and hand extended in front of him, and employs a long rhythm and an open defensive guard. He battles almost-exclusively from the outside, from where he serves his offense via his usual 1-2 combination.

Wilder’s calling card is his incredible punching power, and with his reputation preceding him, he often wins his fights before even stepping the ring. The same can be said of his ring generalship, where the simple threat of a punch from the Bomber is enough to intimidate his opponents and put them on their back foot.

Like Stiverne, Wilder lacks a comprehensive defense, opting to dodge punches or use his foot-speed to jump out of range of incoming shots, and rarely relying on blocking or parrying. His lack of quality opposition makes it difficult to judge his reaction against effective aggression, but the few times his opponents have had him moving backwards, Wilder looked uncomfortable and panicky, and eager to change the direction of the exchange.

Despite his success at the Olympic Games and on the national level, Wilder entered professional boxing with only 33 amateur bouts under his belt. Consequently, much of his learning of the craft has occurred ‘on the job,’ and there are still holes to be exploited in his fundamental game.

Wilder has had a tendency, at times, to find himself out of position or out of balance; to telegraph his right hand; or to lean in with his punches. These technical deficiencies have slowly been corrected by his team, but in times of trouble, fighters can quickly revert to bad habits. A smart fighter like Stiverne will waste no time picking up on these and punishing Wilder for his mistakes. 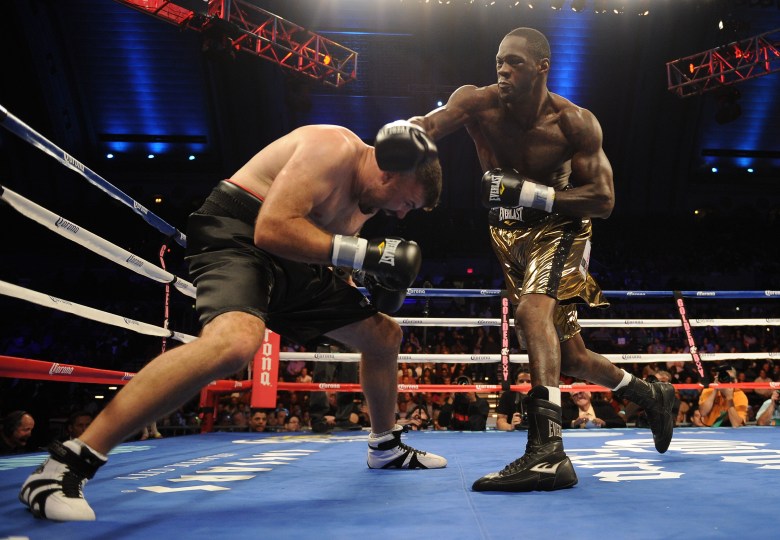 Whatever game plan Stiverne brings to Saturday’s melee, whether he aims to end it early or take Wilder into deeper waters, he will have to overcome the Bomber’s height and reach-advantage to get within punching range. He should look to move inside whenever possible, targeting the body to draw the guard down and putting Wilder on his back foot. Constant pressure will be key for Stiverne.

With Wilder carrying a powerful but limited arsenal, Stiverne should look to immediately shut down the taller man’s jab with counter right-hands. He should use head movement and feints to elicit sloppy reactions and create openings to counter.

Stiverne would be smart to stay off the ropes, and keep that left hand up and ready to catch any incoming right hands. Getting into a jab war with Wilder would be a mistake for the Haitian.

Wilder will want to make this a long distance affair by keeping Stiverne at the end of his telephone pole jab and not giving him any opportunity to get inside.

Wilder should activate that jab and use constant lateral movement, working the perimeter to keep Stiverne from resetting and moving in on him. Like Stiverne, Wilder does not fight well off the ropes and should stay away from them at all costs.

This is not the fight for Wilder to test his endurance. If he is to get past Stiverne, he should look to end the fight quickly, within the first three rounds.

Saturday’s fight brings us an intriguing encounter that will answer several questions. Mainly, fans will finally get a chance to see what Deontay Wilder is made of and if he is indeed the real thing. And if Wilder falls but proves to be a worthy opponent, the same can be said of Stiverne, whose record has also been the subject of criticism.

A win for either fighter could mean a shot at a heavyweight unification fight against the mighty Wladimir Klitschko. The loss, on the other hand, would send Stiverne to back of the line for another shot. For Wilder, a defeat, depending on the scale, could signal the end of his storied run and would likely relegate him back to the club and theater circuit to finish out his career.

“On January 17 I will hurt Wilder,” Stivern said. “And I will knock him out and it will be a lasting image in peoples’ minds for a very long time.” 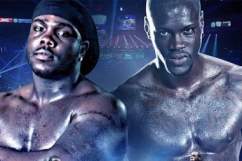