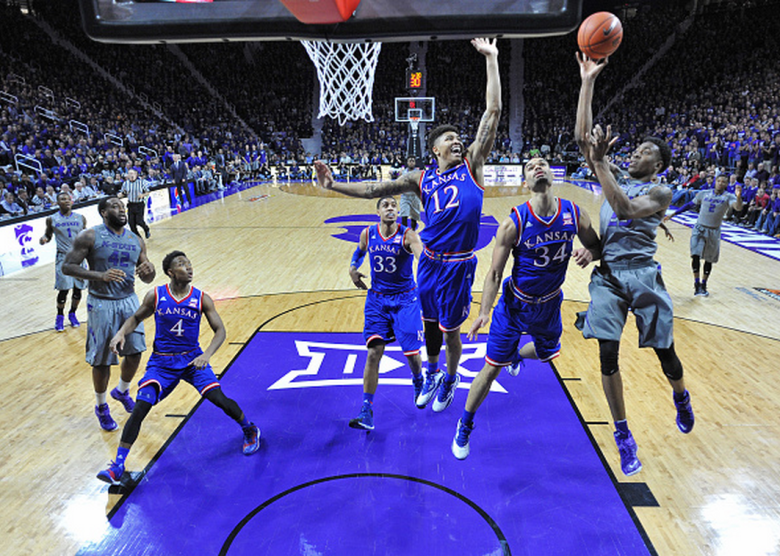 Guard Wesley Iwundu #25 of the Kansas State Wildcats puts up a shot against defenders Perry Ellis #34 and Kelly Oubre Jr. #12 of the Kansas Jayhawks during the first half on February 23, 2015 at Bramlage Coliseum in Manhattan, Kansas. (Getty)

Kansas might have gone through this year Joel Embiid and Andrew Wiggins-less after he was the No. 1 NBA Draft pick following last season, but that didn’t stop the Jayhawks from having another strong season. They received a No. 5 preseason ranking, clenched the regular season Big 12 championship, finished out the season as the 8th-ranked team in the nation and were seeded No. 2 in the Midwest region for the tournament.

While they have a slightly different roster than fans saw last year during March Madness, they do have a coach who knows a bit or two about putting together a winning lineup.

Get to know Jayhawks Head Coach Bill Self:

1. Self Has Coached the Jayhawks to a Regular Season Conference Title 11 of His 12 Seasons

Self, 52, started his Kansas coaching career in 2003 – making him just the eighth coach to take the helm of the Jayhawks program. Since taking over the team, Self has won the 2008 NCAA national title, a KU record-setting 11 straight regular season Big 12 Conference titles, which tie him for third all-time in NCAA Division I history, and six Big 12 tournament championships.

He has more conference titles than home court losses – Self posts an all-time record of 175-9 in Allen Fieldhouse. He is also one of three active coaches who have led three different team to the Elite Eight round of the tournament – Louisville’s Rick Pitino and Kentucky’s John Calipari are the other two. 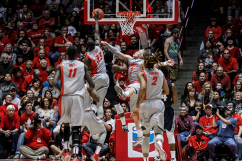 2. Self Is the Fourth Highest Paid College Basketball Coach 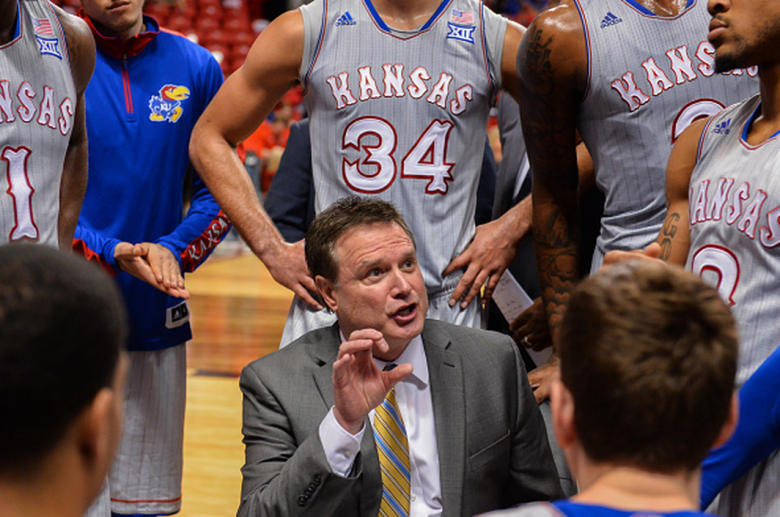 Head coach Bill Self of the Kansas Jayhawks talks with his team during a timeout against the Texas Tech Red Raiders on February 10, 2015 at United Supermarkets Arena in Lubbock, Texas. Kansas defeated Texas Tech 73-51. (Getty)

After his playing career at Oklahoma State University, Self began as an assistant coach at Kansas in 1985 before returning to his alma mater as an assistant the following year. He stayed at OSU until 1993 when he was offered the head coaching position at Oral Roberts University. Self then moved on to be a head coach at Tulsa in 1997, then Illinois in 2000 and finally Kansas in 2003.

Self’s $4,960,763 per year salary with the Jayhawks makes him the fourth highest paid coach in college basketball, according to Business Insider. He sits behind Kentucky’s John Calipari (No. 3), Louisville’s Rick Pitino (No. 2) and Duke’s Mike Krzyzewski (No. 1).

3. Self Talked With the Cleveland Cavaliers About Their Coaching Vacancy

The Best of Andrew WigginsAs Andrew Wiggins hits the midpoint of his rookie season, we take a look at the best moments. About the NBA: The NBA is the premier professional basketball league in the United States and Canada. The league is truly global, with games and programming in 215 countries and territories in 47 languages, as well as…2015-01-22T14:47:56.000Z

Embiid was selected by the Philadelphia 76ers and Wiggins was picked by the Cleveland Cavaliers, who, at the time, were looking for a new head coach.

And naturally rumors began to spin about discussions between the Cavs and Self. But the Kansas coach quickly laid those to rest. KUsports.com reported that Self told the Journal-World that he spoke in “general terms” with the organization’s front office about the job. He said:

I talked to the Cavaliers a lot through this whole draft process concerning Andrew (Wiggins) and Joel (Embiid) and other things. We visited about the job. At no point in time was there any serious discussion about anything. We visited in general but no serious discussions about it or anything like that.

When asked how many NBA teams had contacted him in the past, Self said:

Not many. This one wasn’t a serious deal because the bottom line is, I made it very clear where I was, and it was just an information-gathering deal.

Although the Cavs were also interest in Michigan State’s Tom Izzo, Florida’s Billy Donovan, Alvin Gentry, Tyronn Lue and offered Calipari an $80 million contract for 10 years, the Cavs filled the vacancy on June 20 with David Blatt.

4. Self Has the Third Most Twitter Followers of any College Basketball Coach 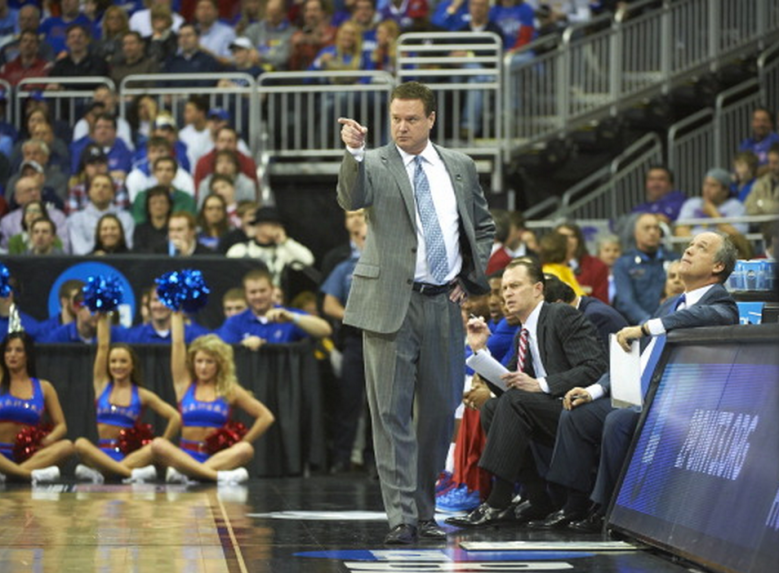 Prior to the 2013-14 season, Sporting News reported that Self was fourth on the list of current college basketball coaches with the most Twitter followers – 79,000.

Since then he’s increased to 122,000 followers, which bumped him up to No. 3 on the list. Self bypassed Florida Head Coach Billy Donovan and falls under Indiana’s Tom Crean (149,000) and Kentucky’s John Calipari (1.34 million).

5. Self Met His Wife Cindy While Attending Oklahoma State University 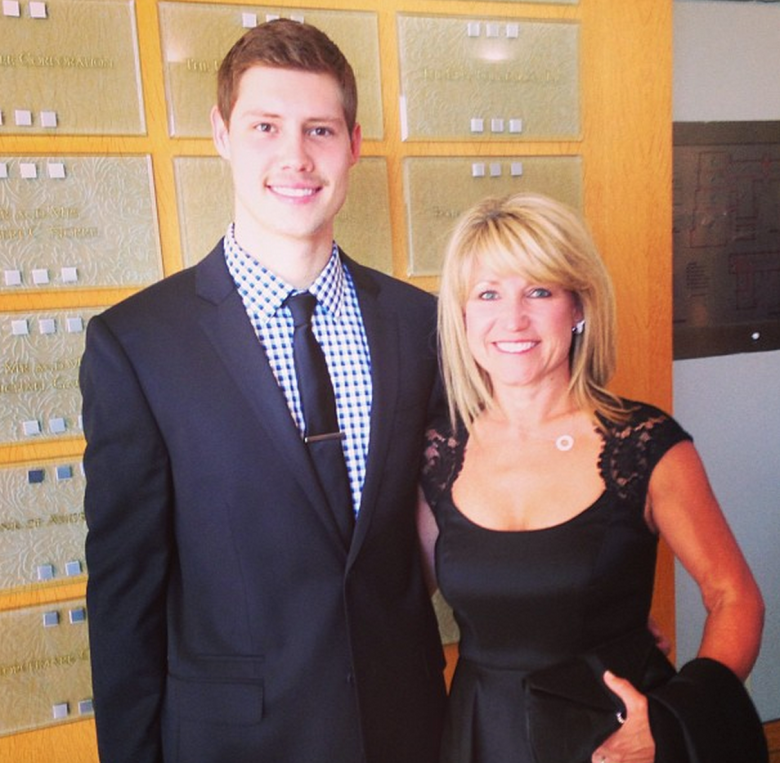 In 1984, after a loss to Kansas, Self met Cindy. They both attended Oklahoma State University – she was a cheerleader and he was a 6-foot-3 basketball player for the Cowboys. The two dated for four years before tying the knot in 1988.

Cindy’s passion is helping children. She has her master’s degree in elementary education and has been very active in charity, which led her and Self to found the ASSISTS foundation in 2006, which focuses on helping the community’s youth, according to PlayerWags.com.

Cindy and Self also have two children. Their son Tyler is a redshirt sophomore walk-on for the Jayhawks.

Kansas Jayhawks Head Coach Bill Self posted this picture with his son Tyler on Twitter with the caption: “What a night at the K. Nothing better than baseball with your son. #TakeTheCrown” (Twitter/@CoachBillSelf)

And their daughter Lauren, who also attended KU and graduated in 2013, works for the Christian ministry Young Life in Richardson, Texas. She also recently got married to Hayden Browning on August 16, 2014.

When asked about giving away his daughter’s hand in marriage, Self told KUsports.com:

I’m as fired up as a dad can be giving away his daughter, but, yeah, I’m fired up. We think the world of Hayden.

Read More
5 Fast Facts, Basketball, College, College Basketball, Kansas, March Madness, March Madness 2015, NCAA, NCAA Tournament, WAGs
Bill Self coached the Kansas Jayhawks to their 11th straight Big 12 regular season title and is now looking to earn his second national title. Here's what you need to know about the KU coach both on and off the hardwood.