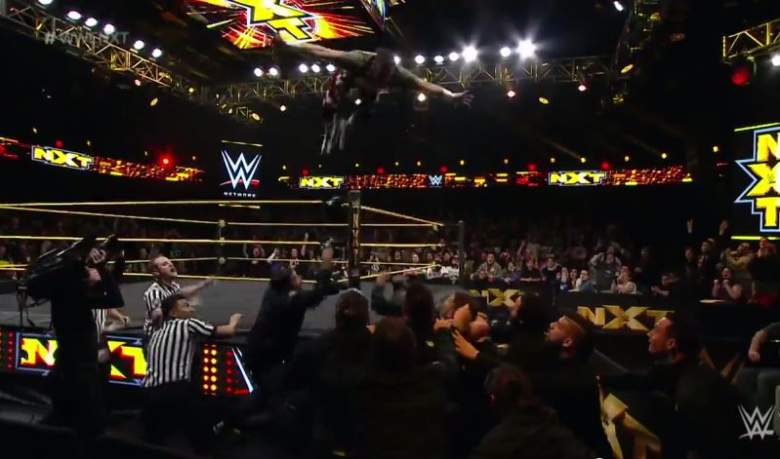 Sami Zayn laid out Kevin Owens and the rest of the NXT locker room. (YouTube/WWE)

WWE’s NXT is held Wednesday nights on the WWE Network, showcasing the next generation of future WWE superstars and divas. Live shows are currently held at Full Sail University in Winter Park, Florida — for now.

This week’s NXT was headlined by what seemed to be the final encounter between Alex Riley and Kevin Owens, the return of Finn Balor after he lost his NXT Championship match with Owens almost a month ago, and three divas who were looking to make their mark again and become the new No. 1 contender for Sasha Banks and her NXT Women’s Championship.

Here are the results and spoilers for the April 22nd edition of NXT:

Balor defeated Dillinger with his trademark finisher, the Coup de Grâce. After the match, Tyler Breeze, NXT’s residential “pretty boy” appeared on screen and said that Balor was just the “flavor of the month” and that soon Balor will encounter Breeze.

What this means: Breeze has looked strong in the last month after a surprising win in his 2 out of 3 Falls Match against Hideo Itami more than three weeks ago.

When Balor was signed, he was promised that he wouldn’t have to stay in NXT for too long before debuting on the main roster, mainly due to his age. This may end up being Balor’s last feud in NXT.

The match was a triple threat, and the winner would become the No. 1 contender for the NXT Women’s Championship currently held by Sasha Banks. Lynch pinned Bayley while Bayley was trapped in a bridged-back Figure Four by Charlotte.

What this means: At NXT Arrival back in February, these three divas and Sasha Banks put on the best women’s match in about 10 years and one of the all-time great multi-women matches for the NXT Women’s Championship. All of the women down in NXT have great chemistry with each other, and have each been given an equal amount of spotlight.

Becky has been vastly improving in spades, and was once a member of #TeamBAE with Banks. This will be a good feud to see how far Lynch has come.

Itami defeated Parker by hitting his trademark moves and finisher, the running kick, in succession. Parker was released by the WWE on April 3rd, so this was one of his last matches in NXT before he left.

Owens defeated Riley after his patented pop-up powerbomb. After the match, Owens attempted to powerbomb Riley onto the ring apron, but Sami Zayn ran out and stopped him. Zayn, relentlessly, jumped from the top rope to the outside onto Owens and the rest of the NXT locker room who had come out to break up the two.

What this means: After Owens defeated Zayn for the NXT Championship at NXT Arrival when the referee stopped the match due to Zayn’s injuries, Zayn had been away from NXT for a few weeks to wrestle on WWE’s Dubai tour and to “sell” his injuries.

Owens vs. Zayn is a strong feud that writes itself. It is such a strong feud, it wasn’t worth it to exhaust it almost immediately with a stretch of matches. Now that these two have been kept apart for almost two months, it makes sense that Zayn, after defeating Rhyno in last week’s main event, once again proved and motivated himself to get back the Championship he still hasn’t had a rematch for yet.

With Balor coming short, Riley out of the picture and Rhyno back down a peg, this opens up a crystal clear NXT main event picture, one that features Sami Zayn vs. Kevin Owens II for the NXT Championship. 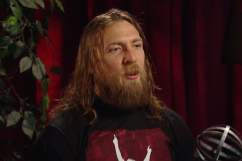 Read More
Breaking News, WWE
On this week's NXT, Charlotte, Bayley and Becky Lynch fought for a shot at the NXT Womens Championship and Kevin Owens once again dealt with Alex Riley's rage.