One of boxing’s most colorful personalities has never had to take one punch to achieve her fame. Iconic pugilist Manny Pacquiao’s mother Dionisia Dapidran-Pacquiao, one of the Philippine’s biggest celebrities, is known for her spunk and eccentricities.

Here is what you need to know about the champion prizefighter’s mother:

Hexes, curses, incantations–  call them as you like. They seem to work for the feisty Dionisia Dapidran-Pacquiao, 65 years old, who has become one of the main attraction at her son Manny Pacquiao’s prizefights.

Viral video of Dionisia chanting and gesticulating towards the ring with a rosary and a prayer book in hand during Manny’s victory over rival Timothy Bradley in April 2014 turned her into an instant internet curiosity and put her on the virtual map.

Dionisia, a devout Catholic, blamed her son’s devastating knockout loss to Juan Manuel Márquez loss on his decision to leave the Catholic church.

“That’s what he gets for changing his religion,” Mommy D said. “Since the ‘Protestant’ pastors came into his life, he has not focus on his boxing. I hope he listens to me when he returns, and be a Catholic again.”

2. Now a Celebrity in Her Country, Dionisia Grew Up Poor

Before becoming a cultural icon and personality in her homeland– making appearances in movies, and singing and dancing regularly on Filipino TV shows– and Manny’s mommy, Dionsia, came from meek beginnings.

Born on May 13, 1949 in the Philippines’ province of Sarangani to farmers, Dionisa was the third of nine siblings. A poor family to begin with, the situation became desperate when Dionsia’s father left her mother and the nine kids to fend for themselves. Dionisia had been married prior to meeting Manny’s father– she and her first husband had two children together.

Left by her first husband for another woman, Dionisia met her second husband, day laborer Rosalio Pacquiao, while shopping in the local town market. They had four children together: Isidra, Manny, Alberto, and Rogelio.

After 20 years of marriage, Rosalio left to work in another town, where he picked up a second, secret, wife. Dionisia found out, and the couple separated. Manny was 12 years old.

Alone, poor, and with a litter of children, Dionisia found herself in the same position as her mother 30 years earlier. Going to any lengths to feed and clothes her children, Mammy D had to take employment as a cleaning lady, a baker, and a factory worker.

Things have come a long way since Manny’s extraordinary success in ring. Now, Dionisia walks the streets surrounded by bodyguards, is written about in gossip magazines, and brags about her collection of Hermès purses.

Watch as she shows off her new home:

4. Mama Pacquiao Used to Lock Herself in a Room to Pray During Manny’s Fights

“No parent would want to see their son engaging in a brutal fight inside the ring,” Dionisia has said.

For many years, Dionisia could not bare to watch Manny’s fights. While the family watched them on television, she would lock herself up in her room with her charms and bible, and fervently pray for Manny.

She finally watched her son fight when he took on Ricky Hatton in 2009. Whether it was Dionisia’s intervention or Manny being Manny, things didn’t work out well for Hatton. Watch what happens when Dionisia sprinkles her fairy dust and Manny’s fist meets Ricky’s face:

5. Dionisia’s Boyfriend is 27 Years Her Junior

A spunky little firecracker like Dionisia needs a companion that can keep up with her. And for that, she has 38-year-old sailor boyfriend Michael Yamson. The lovebirds met while Yamson’s ship was docked General Santos City and he and his fellow seamen were on an onshore excursion.

Despite criticism from the public of the May-December relationship, and questions about Yamson’s intentions, her family is standing by her. “We support her in whatever decision she would make,” Manny’swife Jinkee said. “We want her to be happy.”

Look at how cute Mommy D is when she dances: 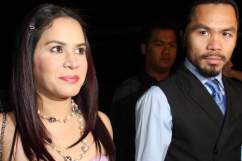