The second of three regular season NFL games in London will be held this Sunday. (Getty)

Normally when the Bills and Jaguars meet, it’s not exactly a game of historical importance. But this Sunday, when both teams meet at Wembley Stadium in London, history will in fact be made. And it has nothing to do with the action on the field.

Instead of the usual broadcast methods, for the first time in NFL history the primary method to view a game will be an online stream. Yahoo will stream the game online, making it free and available to anyone with an internet connection. It’s an interesting experiment for the NFL or any other major sports league, but it could be a peek into the way we watch sports in the future.

Here’s what you need to know about Sunday’s game:

1. The Game Will Be Free Everywhere

EJ Manuel will make his second start for the Bills if Tyrod Taylor is still injured. (Getty)

Sunday’s game will be free to everyone. Anyone with an internet-connected device can watch the game here. The page has had a countdown clock since June, when the NFL-Yahoo partnership was first announced.

In addition to the web, the game will be accessible on any of Yahoo’s apps. Yahoo Sports, Yahoo, Yahoo Fantasy Sports, Tumblr, and the Yahoo Screen apps will all be streaming the game. Just make sure you’ve downloaded the latest update. There is also unrestricted access for anyone using Chromecast, Roku, or any other streaming device.

Julius Thomas, who missed the start of the season with a finger injury, caught his first touchdown pass as a Jaguar last week. (Getty)

For Bills and Jaguars fans, they can watch the game normally. Except that they have to wake up early. The 9:30 a.m. EST kickoff will still be shown normally in the local markets. If you’re not in the local market, you’re going to have to use the live stream. The game is not available on DirecTV’s Sunday Ticket package.

3. There Are No Future Plans For Another Stream

Whether the global viewing is a success or not, this is a one-shot deal for Yahoo and the NFL. And it didn’t come cheap. Reports indicate Yahoo paid “at least” as $10 million for the rights to stream Sunday’s contest, with no promise of future business between Yahoo and the NFL.

It’s an interesting play for both parties, as the technology is changing the way we consume media. The rights for Sunday and Monday are locked in until 2020, but next year CBS Thursday Night deal expires. If Sunday’s stream is a success, it could lead to more streamed games in the very near future. 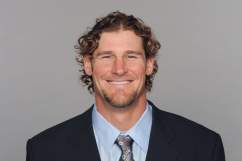 4. The NFL Has Experimented With it’s International Games

The NFL has been playing games in London every year since 2003. (Getty)

In it’s effort to spread the game abroad, the NFL has spent years trying to make the game more appealing to international fans. There was an entire league in Europe, then an exhibition game, and now the regular season appearances. It started as one per year, and has now grown to three London games each year. Last year was the biggest step forward, when the NFL had ratings success when moving the game to a 9:30 a.m. EST start.

It was a national story when it was announced that Falcons-Lions be the first London game with the early kickoff. With kickoff scheduled for 6:30 a.m. PST, nobody was sure what the reception would be. But after the Lions rallied back from a 21-point deficit to win, the NFL knew it had a hit. The game extended football Sunday by another three hours, bringing the Sunday broadcast total to 15 consecutive hours of NFL football. The time change also boosted viewership in London, as the early kickoff was more in line with regular football kickoff times. In the offseason, it was announced that all future London games kickoff be at 9:30 a.m. EST.

5. The Jaguars Have a Strong Fanbase in London

Blake Bortles has made improvements in his second NFL season. (Getty)

If any team is going to headline a major NFL event in London, it should be the Jaguars. Jacksonville has made more appearances abroad than any other NFL team, having already played two regular season games at Wembley. For Jaguars owner Shad Khan, the Jacksonville-London connection has been a valuable piece of the franchises’ history. So much so that Khan, who has owned the Jaguars since 2012, thinks that the Jaguars should be perennially tied to the International Series. Kahn recently stated that he envisions the Jaguars playing a game in London every year for the foreseeable future.

The International Series began with the end result being an NFL team permanently playing in London. For a league attemptimng to build it;s fanbase abroad, these next two weeks will be crucial. It will be the first time the NFL will play in Wembley on back-to-back weeks. The NFL is hoping the London audience embraces the weekly grind of the NFL season, instead of treating American football as it’s annual spectacle.

Read More
Buffalo Bills, Football, Jacksonville Jaguars, NFL, Yahoo!
Bills-Jaguars won't be your average Sunday game. The teams will play in London, and the game will be streaming online for free on all Yahoo platforms.