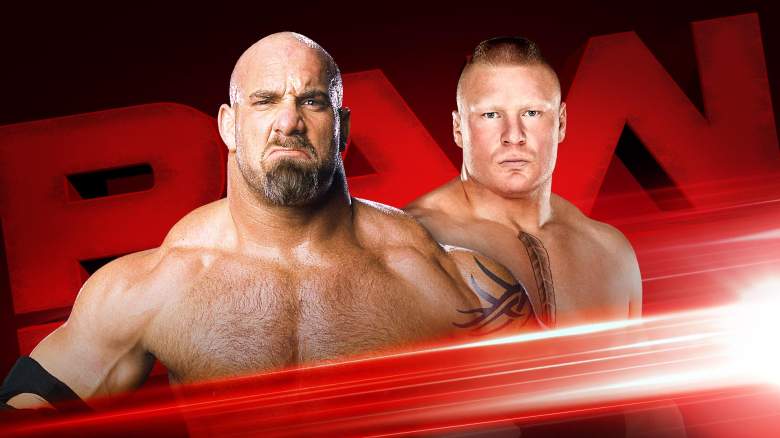 Goldberg and Brock Lesnar will meet face to face tonight on Raw. (WWE.com)

Tonight on Monday Night Raw, it’s the final show prior to Sunday’s Survivor Series pay-per-view, and Goldberg and Brock Lesnar will be meeting one last time. Plus, SmackDown‘s Shane McMahon and Daniel Bryan will arrive to confront Stephanie McMahon and Mick Foley, and the rest of the roster will struggle to put their differences aside so they can team up and defeat Team Blue. The show will be broadcast live from Buffalo, New York tonight at 8:00 p.m. Eastern Time on the USA Network. Read on for match results and spoilers, followed by a preview of the night’s events written earlier this afternoon.

8:00 – The show opens with Stephanie McMahon and Mick Foley in the ring. All of the Raw superstars who will be going to Survivor Series are standing in a line. At the pay-per-view, McMahon says that all of these competitors can prove Daniel Bryan wrong, as he said that those on the Raw brand are lazy and complacent. McMahon goes on to say that everyone has to work together as a team tonight, otherwise some serious changes will have to be made.

8:11 – Kevin Owens and Roman Reigns defeat Cesaro and Sheamus. At one point in the match, Kevin Owens starts arguing with Roman Reigns outside of the ring, and Cesaro uses this opportunity to launch himself on top of both of them. Despite this, they’re able to turn things around and take the victory, with Roman Reigns spearing Sheamus and then dragging Kevin Owens, the one who is legally tagged in, on top of Sheamus.

8:27 – Backstage, Chris Jericho tries to inspire unity in Seth Rollins and Braun Strowman. He gives both of them a present…a special Chris Jericho scarf! Rollins says he isn’t really a scarf guy, and so he returns the gift. Braun doesn’t open his gift, saying he wants the scarf Chris Jericho is currently wearing. Jericho is so intimidated that he immediately hands it over. Braun then rips the scarf up, saying, “I don’t like scarfs and I don’t like you.”

8:36 – Bo Dallas fights Sami Zayn, failing to get himself an Intercontinental Championship match at Survivor Series.

8:46 – Backstage, Brian Kendrick addresses the cruiserweight division, trying to put them at ease and assuring them that he will retain his title at Survivor Series.

8:49 – The New Day enters. They say they’ve been WWE World Tag Team Champions for so long because they know how to survive, and so they roll out a shopping cart full of New Day merchandise that they promote as a survival kit.

9:19 – Backstage, Paul Heyman arrives to talk to Stephanie McMahon and Mick Foley. He says that anyone who wants to see the beating of a lifetime gets to see it this Sunday, when his client, Brock Lesnar, defeats Goldberg. Heyman also says that the word around the locker room is that the SmackDown Live team is looking pretty good.

9:22 – Backstage, Charlotte accuses Sasha Banks of being immature. Banks says that she isn’t the only woman around here who doesn’t like Charlotte, but Charlotte says that Banks is simply jealous. Banks says they need to put their differences aside from now, but come Monday morning, she’ll continue to pursue the Raw Women’s Championship.

9:43 – Backstage, Karl Anderson and Luke Gallows confront Enzo Amore and Big Cass. They tell them that if the two tag teams hope to get along tonight, Amore and Cass need to drop the lame comedy routine. Big Cass says that they’ll team up with Anderson and Gallows for tonight and for Survivor Series, but they won’t ever trust them beyond that.

9:50 – Brock Lesnar enters, accompanied by Paul Heyman. Goldberg enters shorly after. Ten security guards are stationed in the ring in order to create a barrier between Goldberg and Lesnar.

While Paul Heyman is making his introduction, Goldberg immediately interrupts him, saying that this is between him and Lesnar. Goldberg also wants the security guards to be removed from the ring so that “the only two men in the ring can get it on.” Heyman says that the security guards are there for Goldberg’s protection, but they won’t be here this Sunday at Survivor Series. Goldberg points out that Lesnar has never defeated him, something he imagines is tearing Lesnar apart.

Goldberg eventually gets so angry with Heyman and Lesnar that he tears off his shirt, ready to fight. When Paul Heyman mentions Goldberg’s family, Goldberg loses it, throwing the security guards aside and going after Lesnar. Lesnar tears off his shirt as well, and he’s about to enter the ring before he apparently changes his mind, stepping down from the ring and walking away.

10:23 – Backstage, Mick Foley congratulates Chris Jericho, Kevin Owens, Roman Reigns, Seth Rollins, and Braun Strowman, saying that they proved they can work together despite their differences.

10:28 – Enzo Amore & Big Cass and Luke Gallows & Karl Anderson defeat The Shining Stars & The Golden Truth. Gallows and Anderson act as if they’re going to let Enzo Amore jump from the top rope and get the victory, but this turns out to be a fakeout, with Gallows coming in and landing the pin.

10:48 – Mick Foley and Stephanie McMahon welcome out Daniel Bryan and Shane McMahon. Shane and Daniel Bryan get in a quick promotion for tomorrow’s SmackDown Live before delving into Survivor Series talk. Stephanie says that at Survivor Series, Raw will prove itself to be the dominant brand; Shane says that SmackDown Live is a better show than Raw, something which actually draws a lot of cheers from the audience. Stephanie responds to this by telling the audience, “You’re at Raw!”

Stephanie goes on to say that the reason Team SmackDown is going to lose on Sunday will be because of Shane. Daniel Bryan says that Shane is a real leader who knows how to bring people together, unlike Stephanie. Plus, he’s as good in the ring as anyone else. Bryan adds that he can’t wait to bring the cruiserweight division to SmackDown. Foley shoots back by saying that they’re going to bring the intercontinental championship to Raw. Foley also says that unlike SmackDown, Raw actually gives its women a chance. Soon, Stephanie and Shane argue about who has the biggest ego and who is the best leader.

Suddenly, Team SmackDown enters, with AJ Styles, Daniel Bryan, Bray Wyatt, Randy Orton and even James Ellsworth coming into the ring. Kevin Owens welcomes them all to The Kevin Owens Show, telling AJ Styles that the World Championship means absolutely nothing here. Styles says that where he’s from, the belt he’s holding makes him the face that runs the place. Kevin Owens says that the Universal Championship means something because he’s holding it, and he’s going to prove his superiority on Sunday. Chris Jericho then adds AJ Styles’ name to the list. He also adds AJ Styles’ hair to the list as a separate entree.

Bray Wyatt then confronts Braun Strowman, saying that he gave Braun the keys to the kingdom but that he abandoned him. Wyatt says that this Sunday, he will destroy the monster he created.

Dean Ambrose then punches Chris Jericho, and both teams immediately begin to brawl. Braun Strowman is particularly brutal on Shane McMahon, but Dean Ambrose and AJ Styles then team up to take Strowman down. Meanwhile, Styles takes on Jericho in the ring, but Jericho gets an RKO from Randy Orton. Then, Bray Wyatt fights Roman Reigns. AJ Styles comes in and tries to take down Reigns, but Seth Rollins comes in to take down Styles with a pedigree. The show ends with Seth Rollins and Roman Reigns once again standing in the ring together, and the rest of Team Raw comes to their side.

Over the past few weeks, Brock Lesnar and Goldberg have engaged in a war of words on Monday Night Raw and in interviews, but never have they come face to face until tonight. The two competitors will meet in the ring in Buffalo, New York less than a week ahead of their big match at Survivor Series, which is over a decade in the making. What will they have to say to one another? Will Paul Heyman be anxious to advocate for Lesnar after getting a brutal spear from Goldberg two weeks ago?

Also, for the first time since July’s brand split, the managers of both Raw and SmackDown will be together, with Shane McMahon and Daniel Bryan paying a visit this evening. Although there isn’t much of a beef between Daniel Bryan and Mick Foley, there’s of course a lot of tension between Shane and Stephanie, and so it should be interesting to see that tension once again prior to Survivor Series. Bryan has also been known to mock Monday Night Raw on Talking Smack, making fun of the show for being too long and for not being as well-liked among fans as SmackDown. Will Mick Foley and Stephanie McMahon have anything to say about Bryan’s constant insults against their brand?

We’ll also see the Raw men and women’s team come together and try to coordinate before their Survivor Series match. But pretty much every member of both teams has a reason to hate their teammates, so getting along will not be easy. On the Raw men’s team is Kevin Owens, Chris Jericho, Roman Reigns, Braun Strowman and Seth Rollins; they’re going up against AJ Styles, Dean Ambrose, Bray Wyatt, Randy Orton and Shane McMahon. On the women’s team is Charlotte, Bayley, Nia Jax, Alicia Fox and Sasha Banks; they’re going up against Nikki Bella, Becky Lynch, Alexa Bliss, Carmella and Naomi.

Survivor Series will also feature a tag team match with The New Day, Sheamus and Cesaro, Luke Gallows and Karl Anderson, Enzo Amore and Big Cass and The Shining Stars going up against Heath Slater and Rhyno, The Hype Bros, American Alpha, The Usos, and Breezango.

Read More
Pro Wrestling, WWE, WWE Raw
Tonight on Monday Night Raw, Brock Lesnar and Goldberg meet in the ring prior to the Survivor Series pay-per-view. Here are all the match results and spoilers.