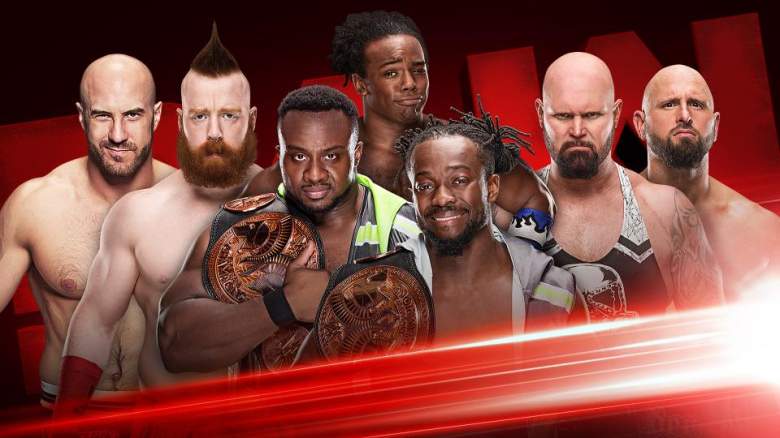 Tonight on Monday Night Raw, The New Day has the opportunity to become the longest-reigning Tag Team Champions in history. Plus, Emma will finally return, premiering her brand new look and character. And ahead of Roadblock: End of the Line on Sunday, the feuds between Sasha Banks and Charlotte, as well as between Roman Reigns and Kevin Owens, will near a conclusion, with the friendship between Chris Jericho and Kevin Owens also falling apart before our eyes. The show will be broadcast tonight at 8:00 p.m. Eastern Time on the USA Network from Philadelphia, Pennsylvania. Read on for match results and spoilers, followed by a preview of the night’s events written earlier this afternoon:

8:00 – The New Day enters. They say that tonight, they will be breaking a record that has stood for over 25 years when they become the longest-reigning WWE Tag Team Champions in history. All they have to do is face off against Luke Gallows and Karl Anderson and Cesaro and Sheamus in a triple threat match, which is about to begin.

8:05 – The New Day wins in a triple threat match against Luke Gallows and Karl Anderson and Cesaro and Sheamus. The match ends when Kofi Kingston pins Sheamus. They retain the title, and this means they will become the longest-reigning Tag Team Champions in WWE history.

8:27 – Backstage, a party is held celebrating The New Day’s win. Stephanie McMahon gives a toast, but the mood turns sour when Xavier Woods accidentally sprays Stephanie with champagne and she freaks out.

8:35 – Backstage, Kevin Owens approaches Stephanie McMahon, saying that what just happened was disgusting and that The New Day doesn’t deserve to be champions. Owens says he has an idea for how to punish them, and McMahon is ready to listen.

8:39 – After the match, Braun Strowman says Mick Foley is right to protect Sami Zayn, as Zayn can’t last in a match with him for more than two minutes, nor can anyone else.

8:40 – Backstage, Sami Zayn demands Mick Foley book him in a match with Braun Strowman. Foley refuses, saying that Strowman will end Zayn’s career. Zayn says that he’s crushed that his childhood hero and his boss doesn’t believe in him; maybe he doesn’t need to be on Raw anymore, Zayn says. Foley says that he can call Daniel Bryan and work out a trade if that’s what Zayn really wants.

8:46 – Ariya Daivari fights Line Dorado. In the middle of the match, Jack Gallagher enters and formally announces his intention of interfering in this match. He calls Daivari a scoundrel, and the two proceed to brawl, with Daivari subsequently being disqualified.

8:55 – Seth Rollins enters, opening up an episode of The Rollins Report. He says once again that he wants Triple H, although to get to him, he has to go through Kevin Owens and the WWE Universal Championship. He can’t isolate Kevin Owens until he gets rid of Chris Jericho, Rollins adds. And it just so happens Rollins has the opportunity to do that this Sunday at Roadblock: End of the Line. But Rollins has a question: is Kevin Owens going to interfere in the match?

Kevin Owens enters. He’s carrying out his own stool, and he places it down and sits down on the walkway, apparently not wanting to actually enter the ring. Owens says this is the best Rollins is going to get, and Rollins assumes he’s too scared to enter without Chris Jericho. Rollins asks how Owens’ friendship with Jericho is going. Owens says we shouldn’t worry about it, but all we need to know is that both men will have one another’s back this Sunday.

Owens goes on to make an announcement: Stephanie McMahon has decided to book The New Day in another Tag Team Championship title match tonight, and they’ll be going up against Kevin Owens and Chris Jericho.

Speaking of which, Chris Jericho enters. He asks Owens if he’s crazy; did he really think he’d agree to be Owens’ tag team partner? Owens tells Jericho to stop thinking about the past because they could make history tonight. Owens also says that the match has already been booked and it’s going to happen one way or another, so they might as well work together. Rollins observes that Owens is telling Jericho what to do once again. An extremely agitated Jericho runs out to the ring to beat up Seth Rollins, and he’s joined by Kevin Owens. Owens and Jericho team up to take down Rollins.

Roman Reigns enters, running in to help out Seth Rollins. With the help of Reigns, Rollins is able to turn the tables, and Kevin Owens and Chris Jericho flee the ring.

9:16 – Backstage, Rich Swann expresses confidence ahead of his triple threat match on Sunday against Brian Kendrick and TJ Perkins. Kendrick enters, saying that he would be Cruiserweight Champion right now if it wasn’t for TJ Perkins’s interruption last week and that TJ Perkins will betray him on Sunday.

9:30 – Backstage, Mick Foley is excited about the prospect of Seth Rollins and Roman Reigns working together again. Foley decides that tonight’s match will now be a triple threat: The New Day vs. Kevin Owens and Chris Jericho vs. Roman Reigns and Seth Rollins.

9:54 – Rusev enters. He says that ever since he came to the WWE, he’s been taking out American icons. But last week, he took out American trash: Enzo Amore. Now he realizes that the “G” in “Certified G” must stand for “garbage.” Then, Rusev and Lana say they’re going to show some edgy footage of what they do behind closed doors.

They then just re-play the footage of Rusev beating up Enzo Amore a second time with no new information at all. Lana says that the audience is all so gullible, just like Enzo Amore.

Big Cass enters. He says that Enzo Amore is still recovering from last week. He then runs into the ring and begins fighting Rusev, standing up for Amore and forcing Rusev to flee the arena.

10:16 – After the match, Mick Foley enters and says he just got off the phone with Daniel Bryan, and they’ve decided to trade Zayn to SmackDown Live for a talent of equal value. All Zayn has to do is sign the contract. Zayn asks one more time if Foley will schedule him in the match against Braun Strowman. Foley says no again, and Zayn says he’s ready to sign. Foley reveals that Zayn will be traded to SmackDown Live in exchange for…Eva Marie.

Sami Zayn is outraged, saying he’s worth a thousand Eva Maries. After the two of them scream back and forth for a bit, Foley finally says that Sami Zayn will face Braun Strowman at Roadblock: End of the Line. He reveals that there was never a trade at all and that he would never trade Sami Zayn for anyone. He just wanted to see if Zayn had the passion necessary to face Strowman, and Zayn proved that he does.

10:34 – The New Day defeats Kevin Owens and Chris Jericho and Seth Rollins and Roman Reigns in a triple threat match. Once again, they retain their title and become the longest reigning Tag Team Champions in history.

11:05 – After the match, Kevin Owens and Chris Jericho argue in the ring. Because Kevin Owens is distracted, Roman Reigns is able to get in a spear, picking up Owens’ Universal Championship belt and holding both the United States and the Universal titles as the show ends.

The New Day is aiming to become the longest reigning tag team in WWE history by beating Demolition’s record of 478 days. If they’re able to win in their match tonight, they will achieve that goal. The problem? They have to go up against Luke Gallows and Karl Anderson in addition to Cesaro and Sheamus in a triple threat match. Can The New Day fend off their four attackers and make history? Or will the WWE shock fans everywhere by having the team be defeated right before passing the finish line?

Plus, last week on Raw, Charlotte brought out her father, Ric Flair, and pretended to apologize and act humble for a few minutes. That didn’t last long, as she quickly reverted back into the Charlotte we all know and hate, and this lead to a brawl between Sasha Banks and Charlotte. We’ll see the aftermath of this turn of events tonight ahead of the big women’s match at Roadblock: End of the Line. In recent months, Sasha Banks has tended to win the Women’s Championship on Raw, only for Charlotte to win it back at the subsequent pay-per-view. Will history repeat itself this Sunday?

Then, of course, there’s the Universal Championship feud, which at the moment involves Kevin Owens, Chris Jericho and Roman Reigns. Reigns and Owens will have a title match this Sunday. But unfortunately for Kevin Owens, the friendship between Owens and Jericho seems to have completely fallen apart, and recently, Jericho’s interference has been the only way Owens has been able to win. Is Owens going to be able to defend his title against Roman Reigns on his own? Chris Jericho has his own match to prepare for on Sunday, going up against Seth Rollins, but might Jericho actually interfere in the Universal Championship match to help Roman Reigns take out his former best friend?

Finally, after her return was hyped up for months on end, Emma will finally be on tonight’s Raw. Fans will recall that she was forced to go on hiatus back in May after suffering a back injury that required surgery. This took some time to recover from, but Emma is finally returning on December 12th’s show, this time debuting a brand new character: Emmalina. What exactly will this return entail? Who is the new Emma?

It all goes down tonight at 8 on the USA Network.