Getty Anastasija Sevastova was raised by her single mother; she is the first person in her family to play tennis on any level.

Anastasia Sevastova is a professional tennis player who retired at age 23, only to emerge from retirement better than ever. She is now poised to play the biggest game of her career against Serena Williams at the U.S. Open semifinals.

Sevastova is originally from Latvia, where she grew up playing tennis in school gymnasiums because it was too cold to play outside. Here’s what you need to know about her family.

Diana Golovanova raised her daughter as a single parent; little is known about Sevastova’s father. Golovanova told The New York Times that she was “hopeless, hopeless, twice hopeless” as a tennis player. No one in Sevastova’s family played tennis.

Golovanova is an English teacher for a secondary school, and was quick to point out that she was not a motivated coaching-type parent like the Williams Sisters’ father, Richard Williams. Golovanova said, “No, never, I’m not the one who insists on anything. I’m just a crying type of mom. I was not like ‘Come on! You’ve got to make it.'”

2. Sevastova’s Grandmother Was the One Who Introduced Her to Tennis

Sevastova’s grandmother was the one who pushed her towards playing a sport, and they fell upon tennis because she had connections to a nearby tennis club. The club was outdoor; there were no indoor tennis courts in the nearby area, so Sevastova would play on the red clay outdoor courts then practice tennis in a gymnasium during the winter.

Sevastova said of her makeshift training, “Until age 14, I practiced in the school gyms on the wood. Riga has some good facilities with indoor clay and hard courts, but I was always in Liepaja. Indoors on wood is a different style of play because it was so fast, and there were lots of bad bounces.”

3. Golovanova Found a Way to Pay for Sevastova to Attend a Tennis Academy in Munich

According to Golovanova, Stevastova went for a tryout at Niki Pilic’s tennis academy in Munich, Germany, and while she was there, Niki Pilic came up to her and said of her daughter, “‘Top 50. Top 30 if she tries hard.’”

“She was just a girl from the middle of nowhere,” Golovanova said. “How could he know that?”

The New York Times reports that Golovanova pulled together the funds for Sevastova’s schooling through a variety of means, including personal savings, donations from friends, Latvian tennis federation funding, and even some private sponsors.

After retiring at age 23, Sevastova began to coach at the Better Tennis Academy in Vienna, Austria. She met Schmidt there while he was coaching, and they began a relationship. Schmidt has maintained that he had no part in convincing her to return to tennis, saying to The New York Times, “Look, it was not my intention to bring her back. I never said to her, ‘Let’s try again.’ It had to come from her, and it was important that she was the one who decided it, not anybody else. And she’s been great. She’s working hard and now she’s in the semis.”

Schmidt and Sevastova have now been together for four years. Of her relationship with her coach, Sevastova said to The New York Times in 2016, “There are good days and bad days, but more good days. It’s complicated, but you have to see private away from tennis, and work that out. I think we are working that out pretty well.”

Simply by virtue of making it to the semifinals of the U.S. Open, Sevastova has already amassed just under a million in this tournament alone. If she beats Williams and advances to the finals, she will have earned $1.85 million, and if she wins the U.S. Open, she will have won $3.8 million. So it’s safe to say that her mother’s investment paid off.

Of her daunting semifinal, Schmidt said that his advice to his girlfriend was to treat it like any other game. “Hopefully she can handle the moment and enjoy the moment,” Schmidt said to The New York Times. “I told her 10 minutes ago that there really is no difference between a quarterfinal and a semifinal. You don’t get a trophy if you win the quarters or the semis, so it’s pretty much the same situation as against Sloane.” 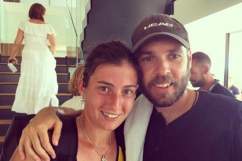