Here are five facts you need to know about this British beauty.

1. She Was A Reality Television Star

Dorsett was in “The Only Way Is Essex” (often abbreviated TOWIE) in 2012. She starred in 15 episodes of the scripted reality show, which is sometimes referred to as the UK version of “Jersey Shore.” She was fired, or left by mutual decision with the producers, in part because viewers found her boring. One cast member described her as a “damp squib” who didn’t contribute much to the show’s drama.

When Georgina met Tom she was 27 and he was 22. Tabloids called Cleverley her “toyboy,” and his friends allegedly razzed him for dating a TOWIE star. Dorsett, however, was adamant that she wasn’t like the other girls on the trashy reality show: “A lot of the girls in “Essex” like to dress up and fall out of clubs,” she told The Daily Mail, “but I’m not one of them.” When they began dating, Cleverley was recovering from an injury. The new relationship was said to have lifted his spirits toward recovery.

Cleverley announced the birth of the couple’s baby, Nevaeh (heaven spelled backwards) Rose, on his Twitter account in June 2013, calling it the “proudest moment of my life.” The superstar couple has kept Nevaeh largely out of the limelight, and Dorsett took a backseat in public for the first year of her daughter’s life as well. A very svelte and fit Dorsett had stepped back out and onto pages of fashion magazines by the end of 2013.

4. Her Best Friend Is Rochelle Humes, Singer For The Saturdays

Rochelle Humes, nee Rochelle Wiseman, started her career as a singer for S Club 8, a by-audition pop English music group. When the band broke up in 2005, Humes became a BBC presenter for a children’s show, and then joined girl group The Saturdays in 2007. Humes married JLS singer Marvin Humes in 2012, and their child is often seen playing with Cleverley and Dorsett’s baby.

5. Dorsett Is A Property Developer

Or was a property developer, whatever that means. Once she took up with Cleverley and began the rapid ascent to reality TV stardom, it seems as if Dorsett put her career on the back burner and began to focus on fame and modeling as her primary money-maker instead. We don’t blame her for that one. 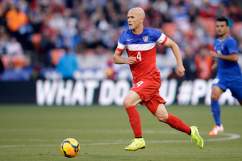