Getty MELBOURNE, AUSTRALIA - JANUARY 16: Serbian tennis player Novak Djokovic leaves the Park hotel on January 16, 2022 in Melbourne, Australia. Djokovic is in detention and faces deportation after his visa was cancelled by the Australian government. His appeal will be heard today, one day before he is scheduled to play in the Australian Open. (Photo by Diego Fedele/Getty Images)

Things did not look good for world number one Novak Djokovic as he will have to leave Australia. The Serbian heard that the court upheld the decision that was made by the Chief Justice of the Federal Court of Australia, James Alsopp.

With the unanimous decision being made by the Australian Federal Court as they stated that the nine-time Australian Open champion was a threat to public health and thus will have to be deported.

The 20-time grand slam champion had been scheduled to play against fellow Serb Miomir Kecmanovic on Monday. This after he was put back into the Australian Open draw after his visa was reinstated earlier this this month.

“Given … the interest and coverage in different parts of the world including Mr Djokovic’s home country of Serbia, the court considers it appropriate to make clear a number of matters about the process that has taken place,” said Alsopp via The Age.

Djokovic to be deported. https://t.co/wgpiWCEQCL

Since then, Djokovic was staying at an immigration detention hotel in Melbourne since the 6th of  January, date in which his visa was revoked for the first time.

Djokovic’s arrival in Melbourne was controversial as the people there experienced the longest lockdown in the world.  This and his disregard for the protocols both back home and in Australia were what ended up being his downfall at the end of the day.

The reasoning behind cancelling the tennis star’s visa was out of concern that his anti-vaccination views might hinder vaccination uptake in Australia and his presence in the country could spark “some measure of unrest”.

Novak Djokovic is set to be deported from Australia after losing a court appeal against the cancellation of his visa.

Here's a reminder of how events unfolded 👇

Get the latest on this story: https://t.co/wPKXl9rqNj

In Serbia This Issue Was ‘Made Political’ By Scott Morrison

The aftermath of how all this played out left a mark in the way that the Australian governments, its courts, and the organizers of the Australian Open handled the situation.  For some, this could even be a topic that ended up having political tinges to it.

“Is all this necessary to win the elections and please your public?” Vucic said in his video, taking a jab at Australian Prime Minister Scott Morrison.

Vucic assured that Serbia will fight for Djokovic and that “the abuse” experienced by the tennis player will not change his country’s respect for the people of Australia or for “the greatest tennis player of all time, who will always be in our hearts.” Finally, he once again showed his full support: “Novak, we are with you.”

What Will Happen to Novak?

If Australian authorities are willing to enforce the rules, they would be looking to also not be allowed into the country for the next three years. Djokovic has to pay costs and will be subject to a three year ban on being granted a visa for Australia. There are exceptions to the ban, including “compelling circumstances” which affect the interests of an Australian citizen, permanent resident or eligible Kiwi.

The tennis player released a statement on the outcome of his court case: 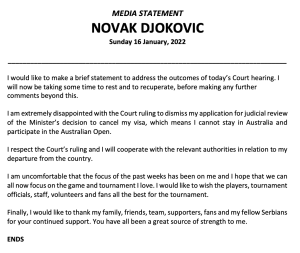 I would like to make a brief statement to address the outcomes of today’s Court hearing. I will now be taking some time to rest and to recuperate, before making any further comments beyond this.

I am extremely disappointed with the Court ruling to dismiss my application for judicial review of the Minister’s decision to cancel my visa, which means I cannot stay in Australia and participate in the Australian Open.

I respect the Court’s ruling and I will cooperate with the relevant authorities in relation to my departure from the country.

I am uncomfortable that the focus of the past weeks has been on me and I hope that we can all now focus on the game and tournament I love.

I would like to wish the players, tournament officials, staff, volunteers and fans all the best for the tournament.

Finally, I would like to thank my family, friends, team, supporters, fans and my fellow Serbians for your continued support. You have all been a great source of strength to me.

Now, a Lucky Loser from qualifying will replace Djokovic in the Australian Open draw. In this particular case it will be 150th-ranked Salvatore Caruso.  The 29-year-old Italian won his qualifying match on Wednesday against Argentine Juan Pablo Ficovich 7-5, 7-6.  He recently participated in the Challenger event in Bendigo where he reached the semis before losing to Ernesto Escobedo 6-3, 6-1.

Loading more stories
wpDiscuz
0
0
Would love your thoughts, please comment.x
()
x
| Reply
Novak Djokovic's time in Australia has come to an end after the Federal Court decided to agree with authorities on his visa