One of the major topics of controversy revolving embattled NFL commissioner Roger Goodell is the Goodell’s handling of the league’s personal conduct policy.

Goodell was set to discuss the policy at a press conference Friday afternoon in New York — his first public appearance since the Ray Rice video emerged on September 8 and sent the league into a tailspin.

Here’s what you need to know about the policy:

1. The NFL’s Standards Are’Considerably Higher’ Than Avoiding Being Found Guilty of a Crime

The first section of the three-page document deals with criminal activity. The policy stresses that it’s “not enough to simply avoid being found guilty of a crime.”

Instead, as an employee of the NFL or a member club, you are held to a higher standard and expected to conduct yourself in a way that is responsible, promotes the values upon which the League is based, and is lawful.

Persons who fail to live up to this standard of conduct are guilty of conduct detrimental and subject to discipline, even where the conduct itself does not result in conviction of a crime.

Goodell has been described as the “judge, jury and executioner” in NFL disciplinary matters because the policy makes it clear Goodell is solely responsible for determining discipline.

On matters involving NFL players, the League will timely advise the NFLPA of the investigation and outcome. As appropriate, the employee will also have the opportunity, represented by counsel and/or a union official, to address the conduct at issue. Upon conclusion of the investigation, the Commissioner will have full authority to impose discipline as warranted.

Discipline may take the form of fines, suspension, or banishment from the League and may include a probationary period and conditions that must be satisfied prior to or following reinstatement. The specifics of the disciplinary response will be based on the nature of the incident, the actual or threatened risk to the participant and others, any prior or additional misconduct (whether or not criminal charges were filed), and other relevant factors.

3. Goodell Has Often Issued Harsher Punishment for Drug Offenses Than for Domestic Violence

Some of the loudest protests against Goodell have come from people pointing out that Goodell has been harder on people convicted of or accused of drug offenses than he has been on people accused in domestic violence incidents.

Goodell notoriously suspended Cleveland Browns wide receiver Josh Gordon (pictured above) for the entire season this year because of numerous drug offenses, but suspended Rice a paltry two games for punching out his fiancee inside an Atlantic City casino elevator.

4. The Personal Conduct Policy Applies to All NFL Personnel

The policy applies to all NFL personnel, including players, executives and owners. Indianapolis Colts owner Jim Irsay was suspended under the policy for six games and fined $500,000 after he pleaded guilty to driving under the influence in March. 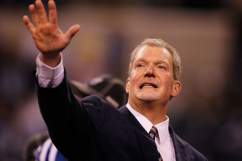 5. People Can Appeal Decisions Made by Goodell, but Goodell Also Oversees the Appeals Process

Following the imposition of discipline, the affected person will have the right to appeal the decision. (For players, the disciplinary decision must be appealed within three (3) business days.) Persons filing an appeal shall be entitled to a prompt hearing pursuant to Article 46 of the Collective Bargaining Agreement and the NFL Constitution and Bylaws, to be conducted by the Commissioner or his designee. In cases involving players, the NFLPA will be entitled to participate in the hearing.