Scott had both his fans and his detractors, and his personality didn’t quite seem to catch on to most until much later in his ESPN career. Scott had a style and broadcast presentation that was entirely unique and true to him, but, at the same time, was a unique viewing experience to the rest of ESPN’s viewers as well. It was because of his true-to-self, urban-sounding and humble style that Scott did eventually win the hearts of so many fans of the Worldwide Leader — patenting expressions such as: “Booyah!” and “As cool as the other side of the pillow” along the way.

Scott is widely regarded as one of ESPN’s top anchors in its history. He was known for reaching out to his fans. He also understood the magnitude of his role in his profession, as well as the different trail-blazing African-American sportscasters who had come before him:

“I think the job for African American sportscasters 14 years ago was tougher because there weren’t that many. Whenever I see Jim Hill, a sportscaster in L.A. [who’s] been local [in] L.A. for a long time, I thank him. I thank James Brown, who’s with CBS now; I thank John Saunders, who works here, I thank Robin Roberts. Those are the people on a national level who opened doors for me to come here. I hope that we are all opening doors for everyone else.”

Scott’s 20-plus year career included some memorable moments. Here are some of those moments: 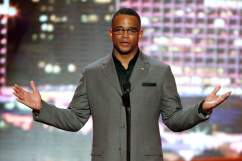 In September 1993, Scott made his first appearance on ESPN programming.

2. This is… Stuart Scott — His Infamous Commercials

For over 20 years, ESPN has been producing a revolutionary set of “This is SportsCenter” commercials. These commercials connect ESPN employees with elements of the sports world (such as team mascots) as well as pop culture, while doing so in a humorous, real way. Above, Scott makes his 1st appearance, but that for sure would not be his last.

This Is SportsCenter – Stuart Scott and Maria Sharapova

This Is SportsCenter – Stuart Scott and Roger Federer

3.Scott was a Major Part of ESPN — His Interviews

Scott took great pride in his job, and with the job of being a high-profiled ESPN sports journalist came the responsibility — like many other journalism professions — to maintain honesty and integrity. Scott was a large part of many ESPN segments such as post-game interviews (eventually becoming the sole interviewer for NBA Finals games) as well as pre-taped segments such as ESPN’s Sunday Conversation. One of the Sunday Conversations that Scott was most proud of was his brief one with NBA legend Michael Jordan.

Scott was known for his enthusiastic attitude and style of calling highlights, and regularly invented or brought in other outside world sayings into the sports realm. Above, he describes Vince Carter’s 360 dunk in detail.

Scott essentially invented the term “Booyah!” and how it was applied to an in-game slam dunks, running back juke or walk-off home run. His terms have been Urban Dictionary approved. He eventually created a memorable catalog of his top highlight-calling moments, one more hilariously fun than the last.

At the July 2014 ESPY Awards, Scott delivered a brutally honest and riveting speech that sincerely captured the emotions of Jimmy V’s 1993 ESPY’s speech.

ESPN gave Scott a platform as he used his battle with cancer to reach out and create clips such this “It’s Time to Man Up!” one to try and give advice and inspiration to others who needed it.

The last two generations of sports fans grew up watching Scott, and he was an important staple for the modern ESPN fan.