Former three-division world champion Adrien Broner (30-1, 22 KOs) makes his next ring appearance going in tough against Shawn Porter (25-1-1, 16 KOs) on Saturday, June 20 at the the MGM Grand Garden Arena in Las Vegas, Nevada. Click here for a preview and prediction of the fight. 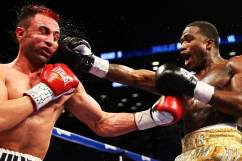 “It’s time for AB on NBC and I can’t wait for the opportunity,” Cincinnati-native Broner said. “This is a great fight that the fans wanted and I wanted. I’m going to come prepared and I’m going to put on a show.”

Broner’s only blemish on his otherwise perfect record came by way of a defeat at the hands of Marcos Maidana in December of 2013.

“I’ve never lost at MGM Grand and I don’t plan on starting now,” Broner Said. “Porter is a strong guy but he’s never been in the ring with someone like me.”

The June 20 Broner-Porter fight will be held at a 144-pound catchweight.