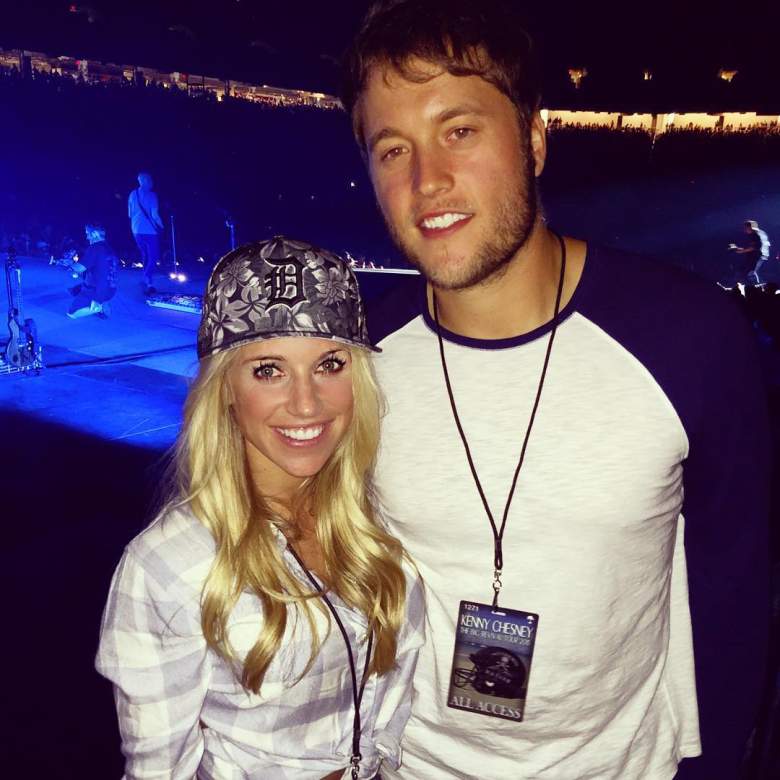 Detroit Lions quarterback Matthew Stafford recently married his longtime girlfriend Kelly Hall earlier this year. Kelly, 26, met Stafford while the two were students at the University of Georgia. Stafford spent his high school years in the Dallas area before going to Athens for college.

The couple, who appeared in a Dish Network commercial, have been together for about eight years and recently sold their house in the Atlanta area.

Here’s what you need to know about the former Mrs. Stafford:

Kelly Had Her Bachelorette Party in the Bahamas

Matthew and Kelly were engaged in March, 2014, and celebrated with a trip to Coldstone Creamery. The two took their engagement

Kelly made sure her bachelorette party was one to remember, inviting plenty of friends to the MGM Grand in the Bahamas. She documented her vacation on Instagram to the delight of her 48,700 followers.

There have been may videos over the years suggesting Mrs. Stafford enjoys the odd party or two.

The Couple Married in Atlanta in April 2015

The two were married in her native Georgia on April 4, 2015 in what was reported as a lavish ceremony on the west side of Atlanta. Several of Stafford’s teammates were at the reception. According to a report, every guest received a free pair of Nike shoes.

They spent their honeymoon in New Zealand, where Kelly was quick to point out that Stafford was working hard to stay in shape for the upcoming season.

Stafford is under contract with the Lions until the end of the 2017 season, and is one of the highest paid players in the NFL. He’s scheduled to make about $60 million in the next three years.

Kelly Has Some Athletic Prowess

Kelly and Matthew met at the University of Georgia. (Instagram: @kbstafford89)

In addition to golfing and working out, Kelly has been seen in several videos draining three point shots in a gym. Hall played basketball in college and looks like she can still hit the open shot. At a pickup game last year, Hall showed off her skills.

Kelly isn’t the only athletic one in her family though; her brother Chad Hall played wide receiver at Air Force. Although he wasn’t drafted, Hall would spend time with the Eagles, Chiefs and 49ers. He played in 25 career games, catching 16 passes for two touchdowns.