Daniel Murphy started the NLCS off with a bang. (Getty)

Murphy stayed hot in Game One of the NLCS, crushing a pitch off John Lester in his first at-bat to give the Mets an early lead. The solo shot is his fourth in the postseason, and his third in as many games.

Ah yes, that last tweet. Many people know of the Curse of the Billy Goat, which is responsible for six decades of Cubs’ misery. But not many people know that the goat, whose smell was potent enough to get it’s owner kicked out of Wrigley, had a name.

Its name was Murphy.

You can’t make this stuff up. 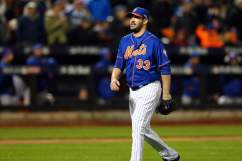