College football fans might do a double take tonight when they see Ohio State wearing all black uniforms against Penn State. The longtime football powerhouse is synonymous with scarlet and grey uniforms. However, in the highly competitive world of recruiting Ohio State has decided in recent years to unveil alternate uniforms.

The all black uniforms are by far the most radical uniforms the Buckeyes have ever worn. Athletic Director Gene Smith spoke to The Columbus Dispatch about the decision:

Recruits are impressionable today and have a great deal of materialistic interest. So, reality is, we’re going to respond to that. Our job, our core mission, is our student-athletes that we serve, first and foremost. And that includes the recruits we’re trying to attract.”

Some believe the uniforms stray too far away from the Ohio State tradition. Smith continued:

Some people thought our first one was drastic. It just matters where you sit. There is that balance of respect, our history and tradition, but also moving ourselves further into the 21st century, which kind of the landscape defines that for you, and the uniforms are part of that.”

Ohio State is promoting the game as “Dark Night in the Shoe”:

Twitter is sure to be abuzz tonight when the uniforms are officially unveiled on the field. Here are some of the photos and reaction that has surfaced so far:

Have yet to see an authentic black Ohio State helmet with Buckeye Leaf stickers. pic.twitter.com/StELtJ7n9Y

#OhioState will Wear All Black Jerseys this week pic.twitter.com/h3ANNFFX9a

Rumor has it that you won't recognize Ohio State tonight in their black uniforms against Penn State. #PSUvsOSU

Ohio State's black uniforms are about to look so good ?? 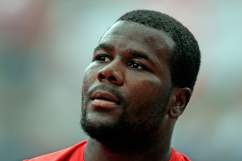 Read More
College Football, Football
Ohio State is breaking away from tradition with their alternate uniforms. We have the photos of the Buckeyes all black helmets and jerseys.