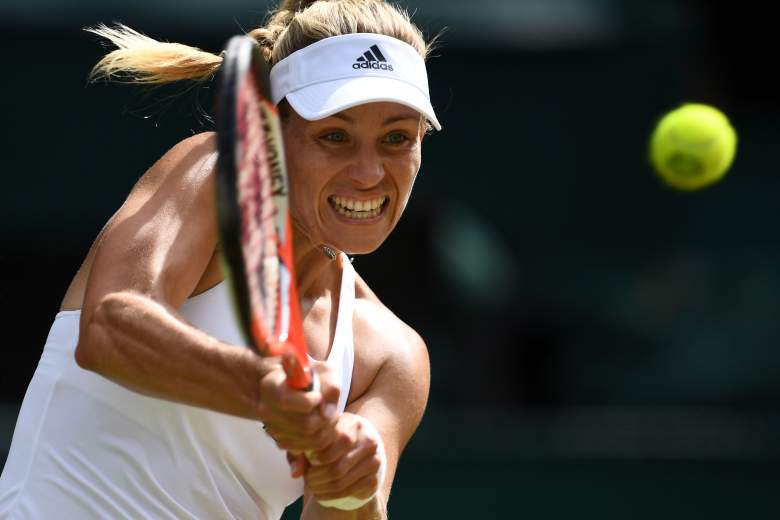 Angelique Kerber set up a Grand Slam rematch against Serena Williams in her 6-4, 6-4 victory Thursday over Venus Williams.

In Saturday’s Wimbledon final, top-seeded Williams will face fourth-seeded Angelique Kerber. Kerber and Williams are fairly familiar with each other after competing seven times over the past few years. The last time they met was when Kerber stunned Williams during the final of the Australian Open in January to win her first major.

The Wimbledon final will be their first reunion on the court since that match, which Kerber won in three sets. Saturday will mark Kerber’s first Wimbledon final.

“Venus won so many times here and was playing really well. That’s why I’m so happy to reach my first Wimbledon final,” Kerber said to reporters.

The 28-year-old has experienced a boost in ranking, and earnings in 2016. Here are five fast facts to know about Kerber’s net worth: 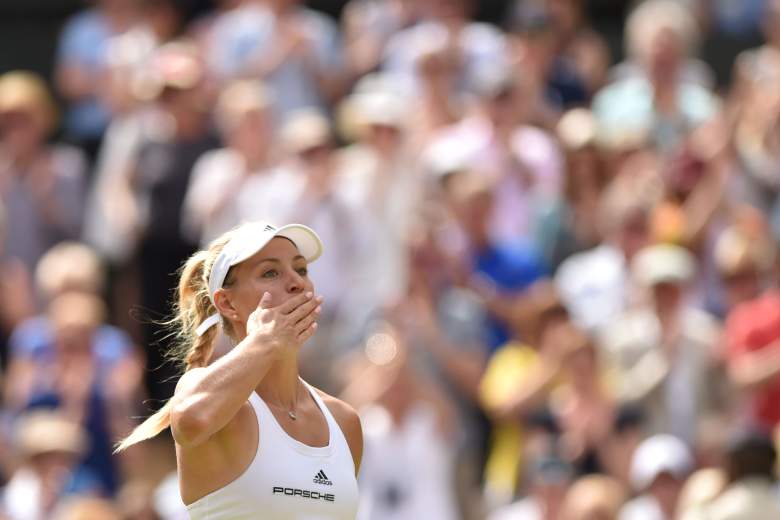 She became the first German to win a grand slam since her idol Steffi Graf in 1999.

Currently ranked at No. 4 in the Women’s Singles World Ranking, Kerber started her Australian Open within one point during the opening round. It took the German player six matches to beat the best female player in the world– staging a huge upset and taking home her first Grand Slam title.

2. Kerber’s Net Worth Is Estimated at $20 Million 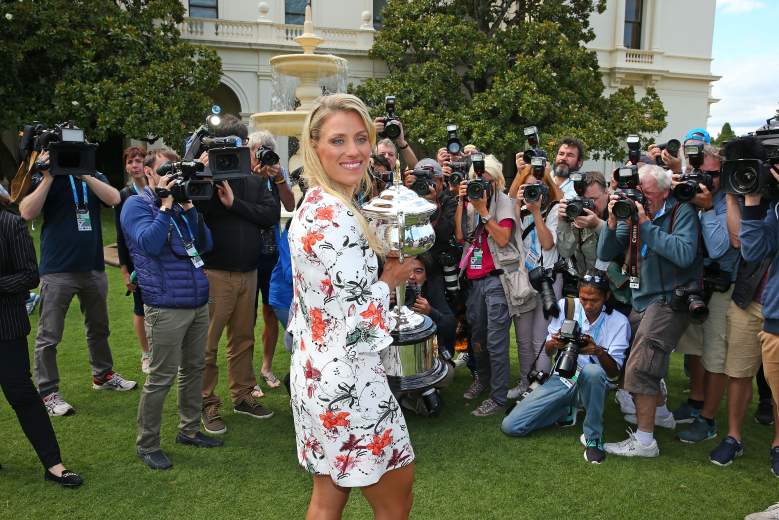 Angelique Kerber poses for photographers as she holds the Daphne Akhurst Memorial Cup during a photocall at Government House after winning the 2016 Australian Open. (Getty)

Kerber has a net worth estimated around $20 million, according to Inquisitr.

Following her win of the 2016 Australian Open, Kerber said it was a dream come true.

“I got my second chance, and this is my dream come true,” Kerber said in her on-court interview. “My whole life I am working really hard, and now I am here and call myself a Grand Slam champion.”

3. Kerber Is a Brand Ambassador for Porsche 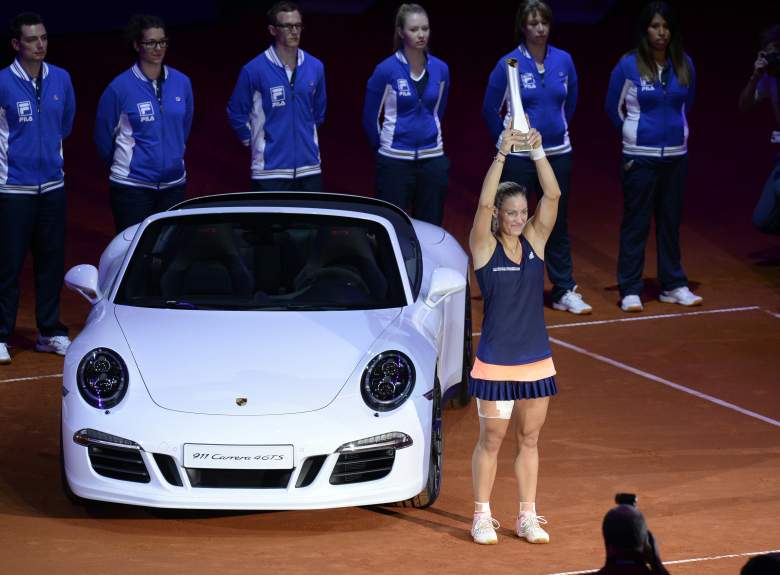 Angelique Kerber poses in the winner’s prize, a Porsche 911 Carrera 4 GTS Cabriolet, after winning against Denmark’s Caroline Wozniacki in the final of the WTA Tennis Grand Prix on April 26, 2015. (Getty)

Serena Williams is the highest paid female athlete in the world, racking up $20 million in sponsorship deals with the likes of Beats, Delta Airlines, and IBM. Kerber may not have the same level of lucrative sponsorships as her top competitor, however she has partnered with well-known corporations to promote her brand and increase her endorsement portfolio.

Porsche named Kerber their National Brand Ambassador in January 2015, after partnering with Maria Sharapova back in April 2013 and making her their inaugural brand ambassador.

Matthias Müller, CEO of Volkswagen AG said Kerber is an excellent representative of the company’s values:

Angelique Kerber’s dynamism and fighting spirit have secured here a firm place amongst the world’s tennis elite. Her friendly demeanour has made her one of the most popular German sportswomen. She and Porsche therefore go together. For Porsche, the engaging of Angelique Kerber as a National Brand Ambassador is a further indication of our commitment to women’s tennis.

Kerber said: “I will do my best as a player to add many additional chapters to the success story and be a worthy representative of Porsche as a brand ambassador.”

4. Kerber Partnered With Adidas to Develop Her Own Line of Tennis Gear

Kerber has also worked to develop her own brand of tennis gear, ranging from on-court outfits to rackets, partnered with Adidas to sell the products on several websites and in store.

According to Adidas, the the tennis attire is “not only visually striking, but performance-driven as well, best suiting confident players who seek performance, boldness and aesthetics in one powerful mix.” 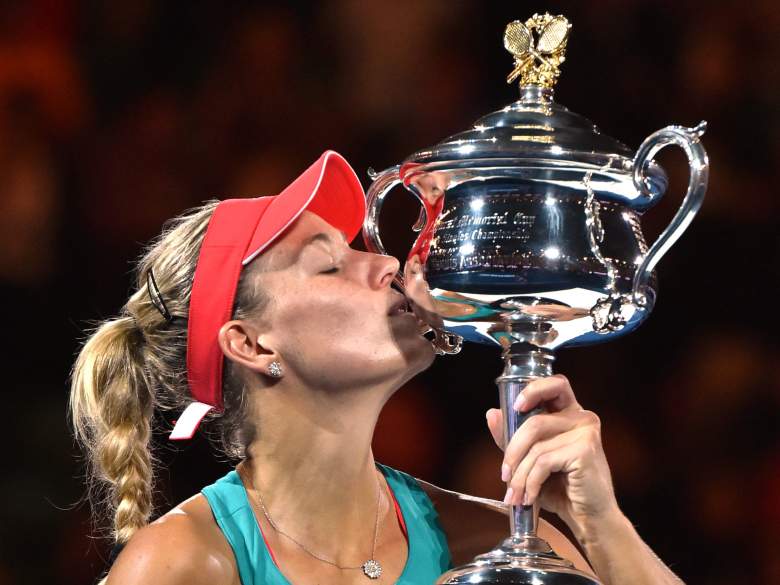 Angelique Kerber kisses The Daphne Akhurst Memorial Cup as she celebrates her victory during her women’s singles final match against Serena Williams at the 2016 Australian Open. (Getty)

In singles, and doubles combined Kerber has won $12,406,351. Kerber has a chance to add significantly to her earnings with a win at Wimbledon. 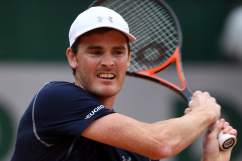 Read More
Net Worth 5 Fast Facts, Tennis
Angelique Kerber will face Serena Williams in a Grand Slam rematch on Saturday at Wimbledon. We break down the 28-year-old German player's net worth, prize money and endorsements.