The video was taken in late June, but it wasn’t until now that the video has surfaced. It was made public by another player, who shared it on Snapchat. Shelby Ball, a former Baylor student, told KXXV that she saw the video and reported it to Animal Control.

“I went to authorities probably about two hours after I saw the video,” Ball told KXXV. “Dogs can’t speak for themselves… I felt like something needed to be done.”

Zamora defended his actions in a statement to KXXV, although he did show signs of remorse.

“I lost my temper trying to discipline him,” Zamora told the station. “I’ve been through training with a dog trainer to help me learn new potty training tips.”

KXXV found that the police investigation has already been completed. The 20-year-old Zamora was charged with a Class C misdemeanor and a citation that will cost him up to $500. However, Baylor head coach Jim Grobe told the Waco Tribune that Zamora will continue to face discipline.

We’re not going to tolerate it… He’s going to be disciplined by a bunch of people. The city is going to get a piece of him, and the university doesn’t take it lightly. There will be some sanctions from the university. From an athletic department standpoint we’ll do some things. Hopefully, it’s a teaching moment and a learning experience for him.

Zamora can still practice with the team, but it’s not clear how many games he will miss.

Animal rights activists are not pleased with the results, however. Tweets directed at Zamora, Baylor, and People for the Ethical Treatment of Animals (PETA) began to surface on Twitter along with the video.

.@Ishmael_Zamora @BUFootball @peta you need to kick this bastard out now. Abusing a dog, disgusting!!!!! 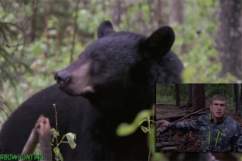