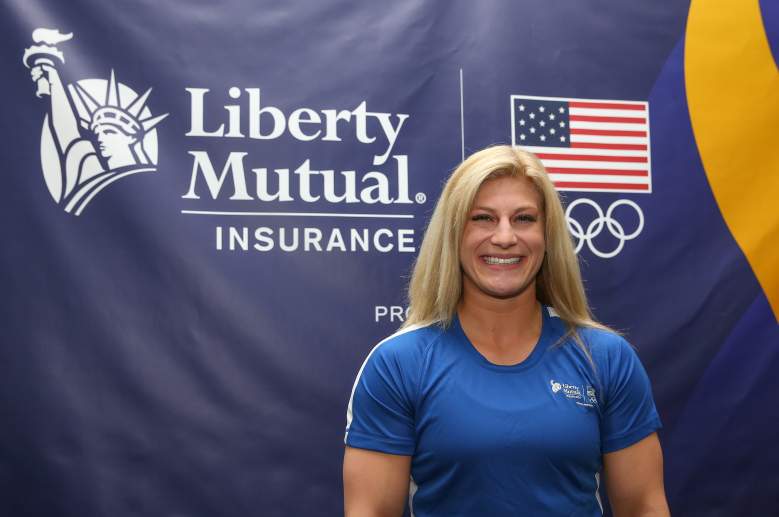 Kayla Harrison was the first American judoka gold medalist when she won at the London Games. (Getty)

When Kayla Harrison won the gold medal in the Judo 78kg division competition at the 2012 London Summer Olympics, she became the first American to win a gold in judo. On Thursday, the Ohio-native, who now lives in Massachusetts, successfully defended her title the Rio Olympics. Harrison’s story is truly remarkable and includes overcoming injuries, surviving sexual abuse as a teen and a possible future in mixed martial arts.

Here’s a look at Harrison’s life and career.

1. Harrison Is Considering a Career in MMA Fighting 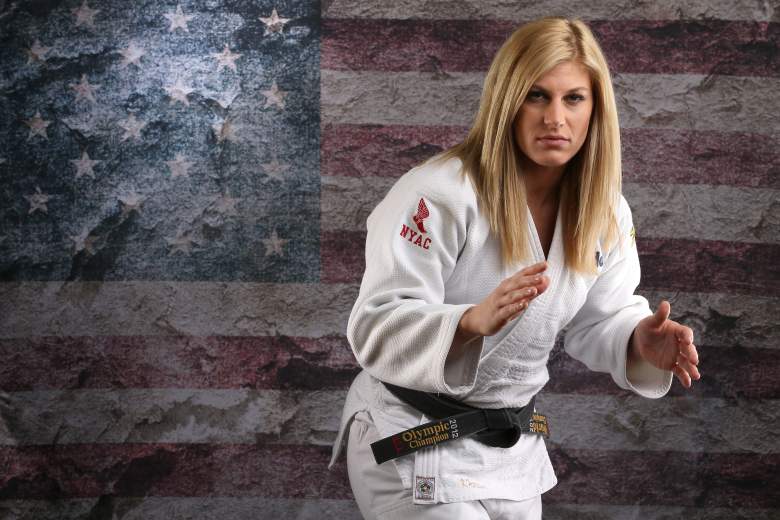 After the Rio Olympics, the 26-year-old will consider a career change, one that could result in a big pay raise. She told SB Nation that she is “considering” going into MMA fighting. She explained:

It could potentially be a very lucrative career for me, but at this point, my focus is just on the tournament on August 11. Then, maybe a beach somewhere here in Rio for a couple of days, and then I’ll make some big decisions. But I know I’m very fortunate. I have a good team around me — my coaches, my manager, my agent. They’ll have my best interest in heart, so I trust them, and they’re gonna advise me in the right direction, and we’ll see what happens.

Harrison said that her agent has so far declined the offers she’s received and it will be difficult for her to make the jump to MMA. She did learn how to box, but judo is different from professional MMA. Harrison also has to lose weight. She’s currently in a judo weight class that has a maximum of 171 pounds. She will have to lose at least 15 pounds for MMA.

“I really liked it. I enjoyed it,” she said of boxing. “For me, it was fun because it was something I’ve never done before. And I was pretty good at it. And it was completely different from judo.” 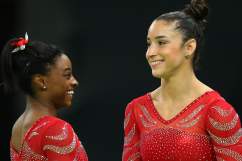 2. She Was Sexually Abused as a Teenager by Her Coach, Who Was Sentenced to 10 Years in Prison 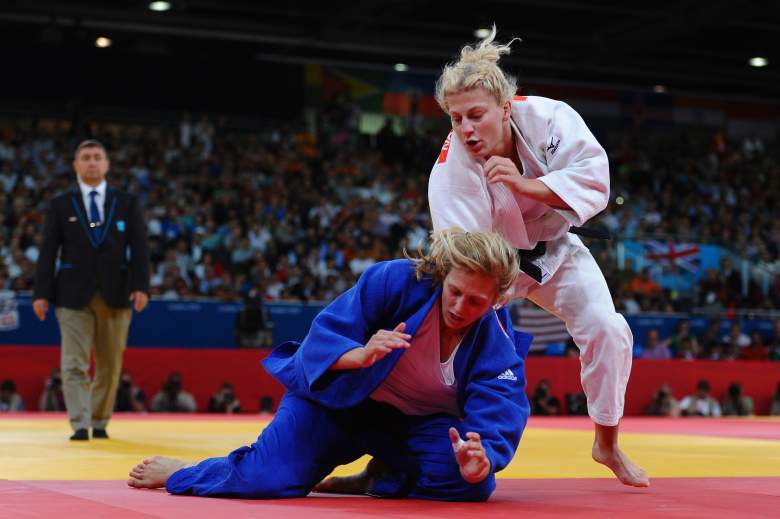 Kayla Harrison was the first American to ever in a gold in Judo at the Olympics. (Getty)

Harrison has been interested in judo since she was 6 years old. At 13, she was introduced to coach Daniel Doyle. Three years later, Harrison told a fellow judokan, Aaron Handy, that Doyle was sexually abusing her. Her friend told her mother, who then contacted police. In an interview with The Telegraph before the London Olympics, Harrison explained:

I was young, terrified but really didn’t understand. Even at an early age, I was putting a lot of pressure on myself to please people. My world revolved around Daniel. He was my sun. All I wanted to do was please him. Unfortunately, he took advantage of that. During those years I was an emotional wreck, severely depressed, suicidal. I hated my life. Finally, it got to the point where I couldn’t take it any more.

USA Judo banned Doyle for life and he pleaded guilty to one count of “engaging in illicit sexual conduct in a foreign place.” Doyle was sentenced to 10 years in prison, notes USA Today.

After Doyle was arrested, Harrison moved to Massachusetts, where she trained with Jimmy Pedro and his son, Jimmy Pedro Jr, a two-time Olympic bronze medalist. The Pedros are Harrison’s mentors and also trained Roussey.

Today, Harrison runs the Fearless Foundation to raise awareness of sexual abuse of young girls. Harrison also tells her story in speeches around the country when not competing.

“We wanted her to quit, but I kind of felt like if she quit, she wouldn’t know how to survive. It was something she’d done for so long,” Harrison’s mother, Jeanniee Yazell, told USA Today in 2012.

“It’s bigger than me. It’s bigger than a gold medal,” Harrison told the Los Angeles Times about her foundation. “Judo is a very selfish thing. I’m not solving world hunger. I’m not making the world a better place by trying to throw someone on their back.” 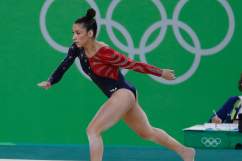 3. She Was Injured Before the London Games & Thought Her Dream Was Crushed 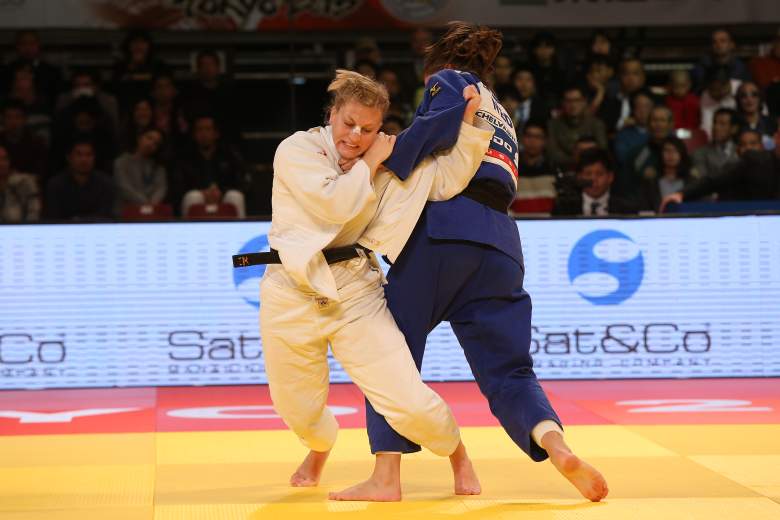 Although the casual viewer might not have been able to tell, but Harrison was hurt when she won her gold medal. While training before London, she tore her medial collateral ligament.

“Would I wish what happened to me on my worst enemy? No,” Harrison told the Telegraph. “But it’s made me a stronger, more confident athlete and I know that there can be nothing in my life that is going to be harder than that.”

After winning the medal, she learned that she had misaligned hips and knees, and twisted tibias. Following surgery, she couldn’t walk for a month and a half.

“It turns out I like to hit things,” Harrison told the Wall Street Journal.

Her left knee still hurts, so she wears a kneepad while competing and training. 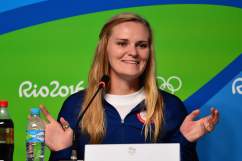 4. She Wanted to Become a Firefighter After London 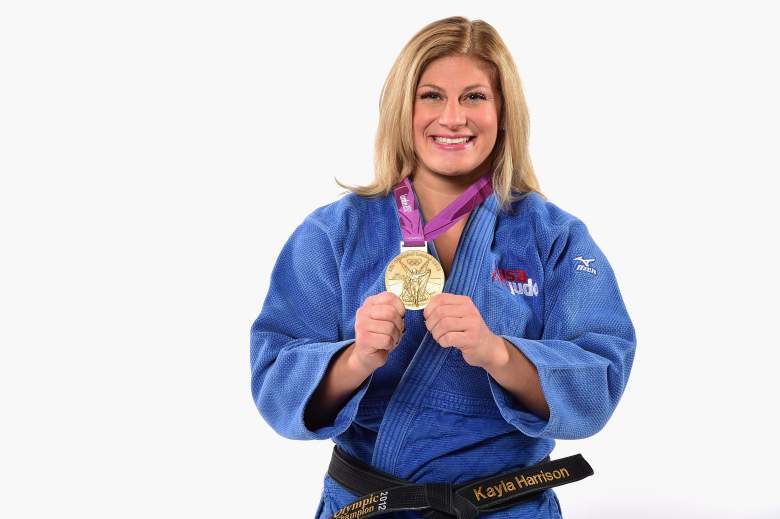 Before heading to London, Harrison was training to be a firefighter. She was engaged to Aaron Handy, the same friend she told about her abuse and who is a firefighter. However, as she told CNBC after London, she decided to put those plans on hold. She ended up focusing on judo.

“The way things are going right now, I think they’re going to have to be put on hold a little longer,” she told CNBC about her firefighter dream.

Last year, Harrison was dating British judokan Frazer Chamberlain, who went to one of her speaking engagements. There are also photos of the two of them together on her Instagram page.

By putting the firefighter dream aside, she could continue competing around the world in judo championships. According to her Team USA profile, she’s won 11 gold medals at competitions since 2013. In 2016, she picked up bronze at the Grand Prix Havana and silver at the GRand Slam Paris. 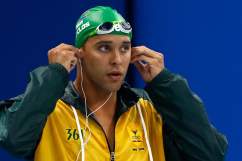 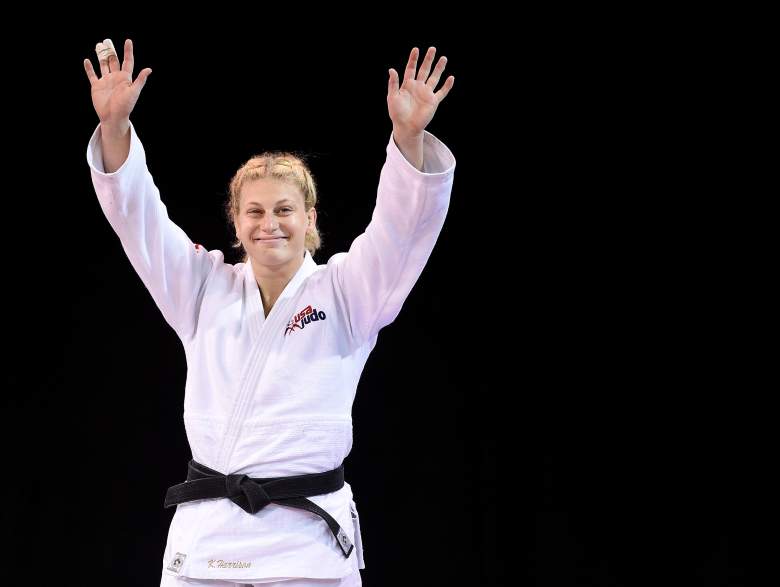 Kayla Harrison at the Toronto 2015 Pan Am Games, where she won another gold medal. (Getty)

Harrison went to the Beijing Olympics, but not to compete. She was there as Ronda Roussey’s practicing partner. Roussey went on to win a bronze medal in Beijing and then became the most famous MMA athlete in the world. Roussey told NBC Sports in 2015 that she would always beat Harrison in practice.

“I had that age advantage, even though she was heavier,” Rousey said. “I always beat her.”

“I used to train with Ronda Rousey, and I guess I always had a little bit of a Ronda complex, you could say. Anything she does, I wanna do – and I wanna do it better,” Harrison told SBNation.