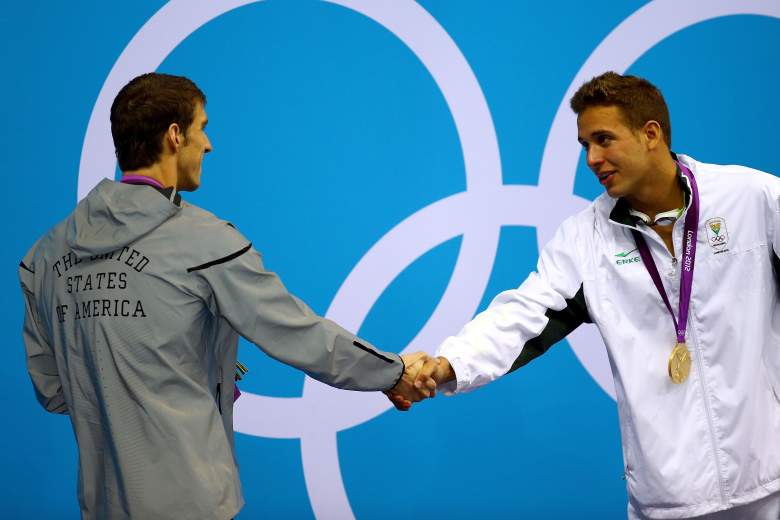 Silver medallist Michael Phelps of the United States shakes hands with gold medallist Chad le Clos of South Africa after receiving their medals during the medal ceremony for the Men’s 200m Butterfly final on Day 4 of the London 2012 Olympic Games. (Getty)

Chad le Clos and Michael Phelps resumed the rivalry that started in London in 2012 for the 200m butterfly semifinal at the Olympic Aquatic Centre in Rio on Monday.

Le Clos snatched gold from Phelps in the 200m Butterfly final in the 2012 games.

Both Chad le Clos and Michael Phelps made the final at the Rio Olympics for the same race, setting up a dramatic rematch.

Here’s what you need to know about le Clos and Phelps:

@MichaelPhelps it was such an honour to race u last night, thank u for being such an inspiration to me and many others, ur the greatest!

At just 20 years old, le Clos beat Phelps in the 200m butterfly by five one-hundredths of a second.

Le Clos frequently referred to Phelps as an inspiration at the London games. Even after beating Phelps in 2012, he called him “the greatest” on Twitter.

“A lot of my motivation definitely comes from watching Michael Phelps,” he told People. “Studying his racing, that just gets me motivated. I want to beat the best of the best.”

He has called the moment he beat Phelps as “the most overwhelming feeling I’ll ever have in my life.”

2. Video of Phelps Staring Down le Clos In the Ready Room Went Viral

Before Monday’s semifinal in Rio, le Clos appeared to be warming up purposely right in front of Phelps in the ready room.

The South African swimmer went through boxing motions, and different movements, Phelps stared ahead with an extremely determined expression.

Phelps outraced le Clos in Monday night’s semifinal, finishing second at 1 minute and 54.12 seconds. He qualified for the final with the second fastest overall time. 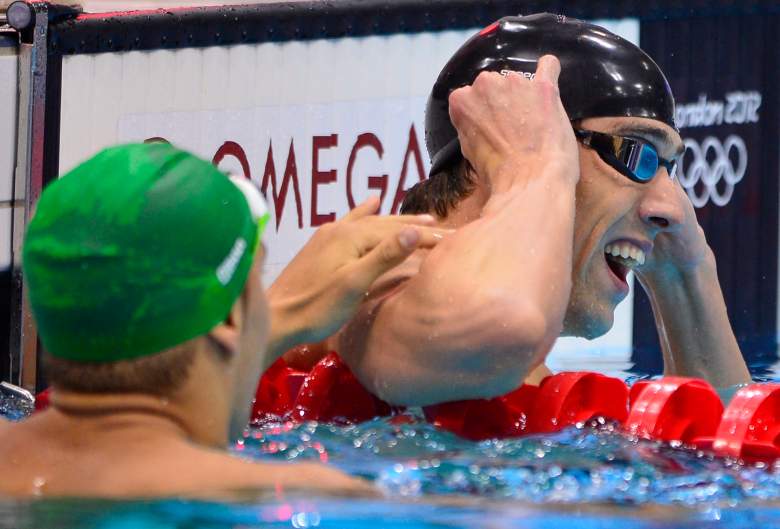 US swimmer Michael Phelps reacts after he competed in the men’s 100m butterfly final next to South Africa’s Chad Le Clos during the swimming event at the London 2012 Olympic Games. (Getty)

After Monday’s heat, Phelps was asked by NBC’s Michelle Tafoya what he was thinking in the ready room with le Clos shadowboxing in front of him.

“Nothing, honestly, I was trying not to really even look at him. He does his thing, I do my thing. I was watching the heat in front of me,” he told Tafoya.

In the interview, Phelps called le Clos a “tough” competitor.” They will swim in side-by-side lanes tonight in the final.

“It’s always good to get in the water and race him,” he said.

4. They Were Planning a White Shark Dive Together After the London Games 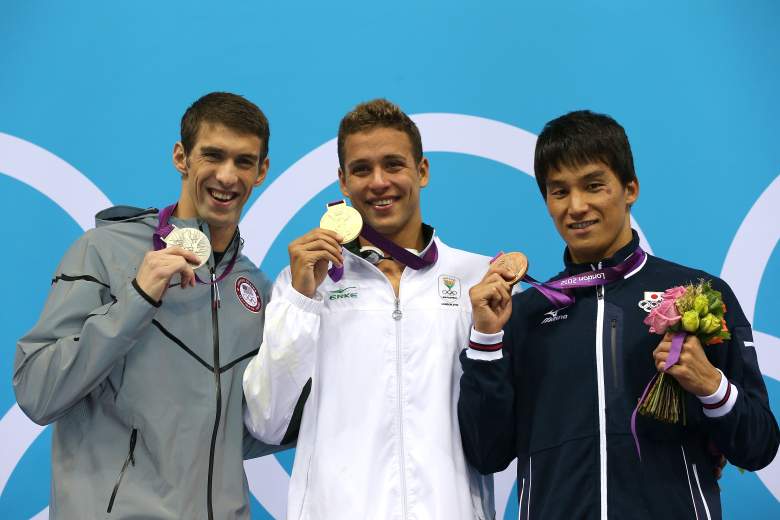 Michael Phelps of the United States, gold medallist Chad le Clos of South Africa and bronze medallist Takeshi Matsuda of Japan pose on the podium during the medal ceremony for the Men’s 200m Butterfly final on Day 4 of the London 2012 Olympic Games. (Getty)

Following the 2012 London games, Phelps told Bob Costas that he was planning to swim with le Clos to see great white sharks in South Africa.

“That’s something I’ve always wanted to do, and Chad (Le Clos) and I were talking, and Chad said ‘why don’t you come to South Africa?’ So I said ‘let’s dive with great whites together.’ And he said ‘OK, let’s set it up.’

“Hopefully we’ll be able to keep in touch and I’ll be able to get down there sometime this year and we can go out and dive,” Phelps said at the time to Costas.

5. Le Clos Called Out Phelps at the U.S. Nationals

Although they have always been competitors, Le Clos and Phelps were friendly with one another. However, since the 2012 games, a sequence of events amped up the tension between the two.

That’s when the rivalry turned a bit sour. Last year le Clos called out Phelps at the U.S. Nationals.

“Michael Phelps has been talking about how slow the butterfly events have been recently. I just did a time he hasn’t done in four years. So he can keep quiet now,” le Clos said after the World Championships race to NBC.

Phelps did not participate in the race, but addressed the South African swimmer’s comments.

“Chad liked me, and then he didn’t like me. He said I was his hero, and then he was calling me out,” Phelps said in response.

Le Clos then made a personal attack against Phelps.

“If I was as great as he was, I would conduct myself in a way children would be proud of,” le Clos told Sport360, referencing Phelps’s 2014 DUI arrest. “I thought I was good friends with him, clearly not. I don’t think he likes me very much,” he added.

Le Clos has certainly spent a lot of time talking about Phelps.

“I’m just very happy that he’s back to his good form, so he can’t come out and say, ‘Oh, I haven’t been training’ or all that rubbish that he’s been talking,” he said, according to The Associated Press. “Next year [at Rio] is going to be Muhammad Ali–Joe Frazier.”