In the commercial, it appears that another man with the same name has dedicated the URL, http://www.johnmalkovich.com, to an Ultimate Fishing site, angering the Being John Malkovich actor. Malkovich #1 proceeds to send an email to Malkovich #2 saying “Guess who? What the f*** is going on? Also, John Malkovich.”

The best part? If you go to www.johnmalkovich.com, you can see that the site actually does link to the Malkovich’s new clothing line– and, of course, the site is a Squarespace design. The ‘About Me’ portion of the site reads, “Acclaimed actor John Malkovich has a new stage: fashion design. Since childhood, John has had an interest in clothes and fashion photography. He even studied costuming at university and, to this day, does costume design for theater. He walked the Comme des Garçons runway when no actor would and was featured in campaigns for Prada, Antonio Miro, and Armani, among others.”

This marks Squarespace’s fourth consecutive Super Bowl ad, and it will run for :30 seconds. The agency behind the commercial is John X Hannes. The company’s other clients include Under Armour, Beats by Dre, Nike, Squarespace and Google, The Golden State Warriors, Taylor Swift, Misty Copeland, Kevin Durant, Antoine Griezmann, Harry Kane and more. According to their site, John X Hannes’ work has been featured in the New York Times, Time Magazine, Wall Street Journal, Vogue, CNN, and Jimmy Fallon.

Interestingly, the ad is based off a true story– Malkovich actually had issues securing johnmalkovich.com. UPI reports that an online imposter tried to sell knockoffs of his fashion line under the same domain name. When USA Today asked Malkovich if the ad was for Squarespace or his fashion line, he said, “I think it’s kind of both. This particular thing is for Squarespace … but it’s also for me because I have never had a web presence before.” 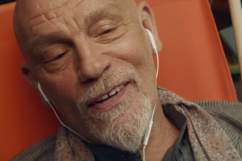