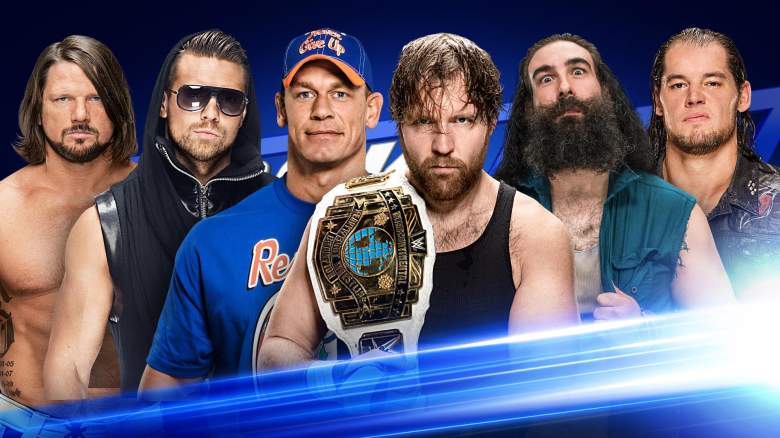 SmackDown Live is currently airing a new episode on the USA Network. Here’s what has happened so far:

It comes down to Luke Harper and AJ Styles, who brawl on the side of the ring and fall and hit the ground at pretty much the same time. (In reality, AJ Styles clearly hit the ground first, but for the purposes of the story, we’re meant to believe that they both hit at the same time.) The referees all argue, and both Harper and Styles declare themselves the winner. Daniel Bryan then runs out and says that the match is a draw. A winner will have to be determined on next week’s show, he says. Luke Harper, extremely upset, attacks AJ Styles.

Bray Wyatt and Randy Orton appear on the TitanTron, and Bray simply laughs as the show ends.

9:23 – Backstage, Bray Wyatt tells Randy Orton that he has earned the keys to the kingdom. He adds that whoever wins tonight will be his sacrificial lamb on WrestleMania.

9:23 – Apollo Crews says that tonight, anyone who stands in his way will be tossed over the top real quick.

9:22 – Backstage, Baron Corbin says that he likes inflicting pain and he likes the spotlight, and tonight the spotlight will be on him as he takes his place in the main event of WrestleMania.

8:53 – Backstage, Luke Harper says that he has followed Bray Wyatt for years, but now he’s free, and there’s nowhere left for Bray Wyatt to run.

8:52 – In a pre-taped segment, Dolph Ziggler says the new era of WWE has been cancelled by him.

8:41 – American Alpha defeats Breezango. After the match, The Usos enter and say that America Alpha are the soon-to-be-former tag team champions and that they can’t train to face two people who have nothing to lose.

8:39 – Backstage, Natalya says that Nikki Bella only has so much support because she has been manufactured in a lab for Instagram likes, and she has the whole world fooled with her fake sincerity.

8:33 – In a pre-taped segment, The Miz lists off all his past championships, as well as all the movies he has been in, saying that his next accomplishment will be main-eventing WrestleMania.

8:33 – In a pre-taped segment, Kalisto says that there’s no limitations to what he can accomplish, including main-eventing WrestleMania.

8:32 – In a pre-taped segment, Dean Ambrose says that tonight he’s taking back his shot at main-eventing WrestleMania that was taken away from him at Elimination Chamber. He also punches a printed photo of Baron Corbin that he has taped on the wall.

8:31 – After the match, Mickie James runs out and attacks Becky Lynch, but Lynch is able to defend herself, and Mickie James retreats backstage.

8:00 – Daniel Bryan enters. He says that there’s only 40 days until WrestleMania, but there are always unexpected twists and turns before that, which is why he’s out here tonight. He welcomes out SmackDown Women’s Champion Naomi.

Naomi enters. Daniel Bryan tells her that for years, she has worked so hard to get to where she is now, which is why she deserves the title. That being said, Daniel Bryan says he now has to do the hardest thing he’s ever had to do as a general manager: ask her to relinquish her championship because of her injury.

Naomi takes the mic and is very emotional, saying that she feels like she let herself and the WWE universe down. But she hands the title over to Daniel Bryan, who gives her a hug.

As Naomi is on her way out, Alexa Bliss enters. She mocks Naomi and tells Daniel Bryan that the title should be returned to her. Bryan says that it does make sense to give Bliss the championship back, but he’s not going to do that. Instead, he’s going to give her an opportunity: tonight she will fight for the SmackDown Women’s Championship against Becky Lynch.

Read More
Pro Wrestling, WWE, WWE Smackdown
Tonight on SmackDown Live, a battle royal will determine the No. 1 contender for the WWE World Championship, with the winner facing Bray Wyatt at WrestleMania.