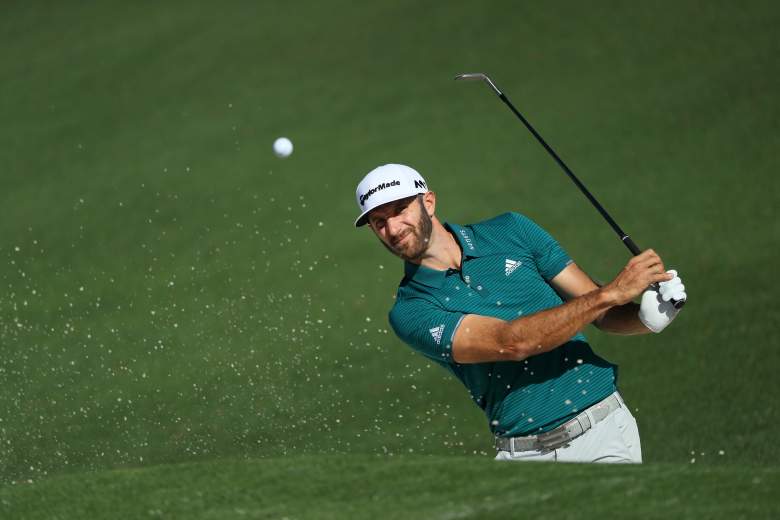 Dustin Johnson during a practice round Tuesday, prior to the start of the 2017 Masters Tournament. (Getty)

Dustin Johnson’s freak back injury yesterday couldn’t have happened at a worse time – just 23 hours before the Masters favorite was set to tee off.

He fell down a short set of stairs at his Augusta, Georgia, rental home at about 3 p.m. Wednesday, and immediately immobilized his back and started taking anti-inflammatories, according to his trainer.

By bedtime, he was feeling more under control, his trainer told Gold World on Thursday morning, and by this morning he had even taken a few practice swings without a club, although he is still in pain.

Dustin Johnson's back injury may be improving, but it still sounds bad https://t.co/SAHog4YyYs pic.twitter.com/vzw5hxxf4n

His pre-round routine was obviously thrown off as the result of the fall, which also injured his elbows, according to ESPN.

But the fact he is set to tee off with the final group – at 2:03 p.m. today – might mean he has just enough time to recover from the injury to his lower left back. Specifically the quadratus lumborum, his trainer told Golf World.

The quadratus lumborum is the deepest abdominal muscle, located in your back, and it helps connect the pelvis to the spine.

If the QL is indeed the muscle that was injured, immobilizing it might make it stiff, with symptoms radiating down the side of the thigh, into the front of leg. Those muscles are key in providing power to the golf swing, according to golf trainer Chris Costa.

The very motion of swinging a golf club can be hard on the back, according to orthopedic surgeons at SpineHealth.com.

The audio below explains exactly how the fall happened.

Johnson has suffered a previous back injury – in 2012, he pulled out of the Masters after hurting his back lifting a jet ski.

Read More
Breaking News, Golf
Masters favorite Dustin Johnson fell down stairs at his Augusta rental home and injured his low back. What will this mean for his performance?