Shayanna Jenkins, the fiancee of former New England Patriots tight end Aaron Hernandez sat down for an interview with Dr. Phil which will air in two parts on May 15 and May 16.

Hernandez and Jenkins, 27, had been planning a 2014 wedding before he was arrested. He was taken into custody at the couple’s home in North Attleboro, Massachusetts, on June 26, 2013, and accused of first degree murder after the body of Odin Lloyd was found at an industrial park near Hernandez’s home. Lloyd, 27, had been dating Jenkins’ sister, Shaneah, which caused friction between them.

Hernandez was released by the Patriots after the charges were filed. He was convicted of first degree murder, unlawful possession of a firearm, and unlawful possession of ammunition, on April 15, 2015, and was sentenced to life in prison. Jenkins routinely visited her fiance at the Souza-Baranowski Correctional Center in Shirley, Massachusetts, and would often bring the couple’s 4-year-old daughter along.

Last year, Jenkins legally changed her last name to Hernandez despite never marrying her beau. On April 19, 2017, Hernandez was found dead inside his prison cell. His suicide came just days after he was acquitted of the 2012 double homicide of Daniel de Abreu and Safiro Furtado. News of Hernandez’s sudden death was a shock to his family and his friends. He was 27 years old when he died.

Since the Odin Lloyd murder case was in the appeal process at the time of Hernandez’s death, the charges and convictions were vacated in accordance with a Massachusetts law that was upheld in court on May 10. This could mean that Jenkins-Hernandez and her daughter, Avielle, will receive money owed to Hernandez by the Patriots, as the organization may be forced to pay the remainder of Hernandez’s contract.

1. Jenkins Thought the News About Hernandez’s Suicide Was a ‘Hoax’

In her candid interview with Dr. Phil, Jenkins-Hernandez revealed that she didn’t believe that Hernandez had killed himself. When she first heard the news, she thought it was a “hoax.”

“I thought it was a hoax. That this was some cruel person playing a trick on me,” Jenkins-Hernandez told Dr. Phil. She also said that she had no idea that this was going to happen and talked about things looking more “bright” for Hernandez’s future.

“Our last talk had nothing to do with suicidal thoughts,” she said.

“I felt like we were looking so bright. We were going up a ladder to a positive direction,” she added. Since the Odin Lloyd murder case was in the appeal process, Hernandez had a chance, albeit a small one, to get out of jail if a new jury found him not guilty.

2. Hernandez Left Her a Suicide Note

The amount of money that may have to be paid to Jenkins-Hernandez and her daughter, Avielle, is said to be about $6 million. The Patriots have not publicly commented on these latest developments.

Jenkins-Hernandez was granted immunity after she agreed to testify in the case brought against her beau. Highlights of her time on the witness stand included her telling the jury about a box that Hernandez asked her to get rid of.

“He told me to go downstairs in our storage room and remove a box from our home. I believe he said it was important,” Jenkins-Hernandez told the jury. She said that she didn’t look inside the box, nor did she ask Hernandez what was inside. Instead, she put the box into a trash bag and disposed of it in a “random dumpster.”

“I found a random dumpster. I don’t remember exactly where it was located,” she told the jury.

She also told the jury that she and Hernandez had some trust issues due to infidelity and that the two had a hard time because Hernandez was a “star” who got “a lot of attention.”

“She broke down and began to cry during questioning from Hernandez’s lawyer as she talked about catching him cheating and about making a decision to work things out with him and to ‘compromise’ on his behavior. ‘That included infidelity,’ she said,” according to NECN. When asked if that infidelity included Hernandez’s supposed sexual relationship with her daughter’s babysitter Jenkins-Hernandez replied, “I guess so… That’s not something that I know happened.”

4. They Met in Middle School & Were High School Sweethearts

Hernandez and Jenkins met in middle school, growing up in a small town and living a few blocks away from each other. The two started noticing each other in middle school and ended up dating soon after. They both graduated in 2007 from Bristol Central High School and stayed together through college. Hernandez was recruited by the University of Florida to play football, but Jenkins stayed back in Connecticut where she attended a community college.

In 2010, Hernandez was drafted by the Patriots. He bought a townhouse in Massachusetts and Jenkins moved in with him. A couple of years later, Hernandez purchased a $1.3 million home in North Attleboro, about 30 minutes south of Gillette Stadium in Foxborough.

As of April 27, 2017, Hernandez’s estate was worth $0 and his beautiful home was still listed for sale. A wrongful-death lawsuit filed by Lloyd’s mother, Ursula Ward, could take some of the money from the home’s sale.

5. Their Daughter Was Born on Aaron’s Birthday

Shayanna Jenkins Hernandez and 4-year-old daughter Avielle step out of caravan of Mercedes-Benz and a Cadillac SUV, both dressed in black. pic.twitter.com/Jsi0KXRKWh

In 2012, Jenkins found out that she was pregnant. Hernandez proposed to her on the day of her baby shower. She still wears her engagement ring. The couple welcomed their daughter, Avielle, in 2012, on Hernandez’s birthday, November 6. After welcoming his daughter, Hernandez seemed to want to change his bad boy ways.

“Every time I come [from] the stadium, I can’t wait to go see her, and she’s a cutie. And basically I can’t wait to go back and look at my daughter. One thing I know is that it definitely changed my life. I’m going to look at things differently, and I may be the young and wild. But I’m not. I’m engaged now, and I have a baby. So, it’s just gonna make me think of life a lot differently and doing things the right way. Now, another one is looking up to me. I can’t just be young and reckless Aaron no more. I’m gonna try to do the right things, become a good father and [ensure Avielle] be raised like I was raised. I honestly couldn’t ask for my life to be better at this point,” Hernandez told NESN at the time.

Although Avielle didn’t have much of a relationship with her father due to the circumstances, Jenkins-Hernandez would bring her to see him in jail during visitation hours. She also brought Avielle to court (pictured above) when Hernandez was on trial for the murders of de Abreu and Furtado. That move made headlines, many slamming Jenkins-Hernandez for subjecting her child to such things. 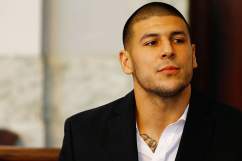