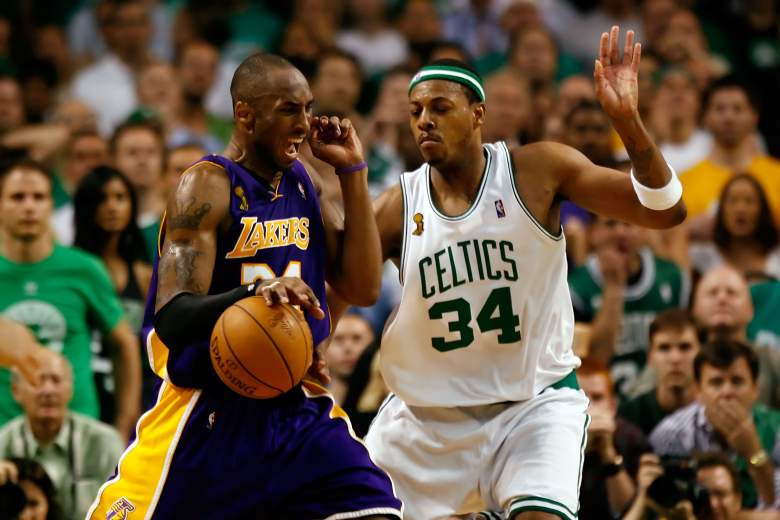 The Boston Celtics and Los Angeles Lakers are part of the most historic rivalry in the NBA. Thanks to a new ESPN 30 for 30 along with the 2017 NBA Draft, the rivalry has been brought back to the forefront for basketball fans.

The two storied franchises have combined for 33 NBA championships. Countless NBA stars have been part of the rivalry that spans nearly six decades. Bill Russell, Elgin Baylor, Wilt Chamberlin, Magic Johnson, Larry Bird, Kobe Bryant and Paul Pierce are just some of the iconic players that have worn a green or gold jersey.

Celtics general manager (and former Celtics player) Danny Ainge believes the rivalry will have another renewal. Ainge spoke with CBS Sports on what the future might hold.

“I don’t think the book is closed,” Ainge told CBS Sports. “I believe there will be another era of Celtics-Lakers rivalries, but you never know…But they’re two very prideful organizations, and with the history of the Lakers and Celtics, I think it will come about again.”

In the meantime, here’s a look back at the Celtics-Lakers rivalry through the years.

Just how dominant have the Celtics and Lakers been? You would need to add up the next three teams on the list of champions to come close to matching where the Lakers and Celtics sit. Boston has won the most NBA championships with 17 titles. The Celtics last championship came in 2008 thanks to Paul Pierce, Kevin Garnett and Ray Allen.

The Lakers are next on the list with 16 titles. Los Angeles last title run came in 2010 when they won their second of back-to-back titles.

2. The Lakers & Celtics Have Squared Off in 12 NBA Finals

3. The Two Teams Met in Three NBA Finals Over Four Years During the 1980’s

From 1984 to 1987 the Lakers and Celtics would play in three of the four NBA finals. According to NBA.com, there were 11 All-Star players that were key pieces of the series during this four-year span. The Lakers won two of the three matchups. The 1980’s were the one decade where the Lakers had the upper-hand in the historic rivalry.

Johnson and Bird would serve as the centerpiece of the 80’s battles extending a rivalry that dated back to their days in college. Years later, Johnson admitted that the two could not have more different personalities, but shared a common love for competing.

“We’re mirrors of each other,” Johnson said on the “Late Show with David Letterman” in 2012. “I may smile a little bit more, but the way we play the game of basketball was exactly the same because we would do anything to win. We didn’t care about scoring points. We cared about winning the game and making our teammates better. That’s why we were able to change not only basketball but able to change the NBA, too.”

4. The 1960’s May Have Been the Height of the Rivalry With 6 NBA Finals Matchups

Half of the NBA finals in the 1960’s featured the Celtics and the Lakers. It is important to note the limited scope of the league with the number of teams ranging from eight to 14 teams by the end of the decade. The Celtics and Lakers did have less teams to compete against to make the finals, but it does not make the stretch any less impressive.

The rivalry was pretty one-sided as the Celtics won all six championships when the teams squared off. Bill Russell was an iconic player during this stretch of the rivalry. Russell was one of the best defenders and rebounders in NBA history.

The league did not track blocks at the time Rusell played, but he had an uncanny ability to block shots while keeping the ball in play for fast break opportunities. Russell averaged 15.1 points and 22.5 rebounds per game over his 13 seasons in the league.

5. The Rivalry Was Renewed at the 2017 NBA Lottery When the Celtics & Lakers Landed the Top 2 Draft Picks

In recent years, the two teams have been at different points in their development causing the rivalry to cool. Fans who admire the history of the game smiled after the 2017 lottery order was unveiled. The Celtics were able to swap picks with the Brooklyn Nets thanks to a previous trade.

Boston inherited the Nets top pick, while the Lakers slid into the two position. The plot gets even more interesting as the two players thought to be the top two players by many draft analysts are point guards Markelle Fultz and Lonzo Ball. While there has been some conjecture the Lakers could take someone other than Ball, there is a good chance the two players will go back-to-back in the draft.

Fultz and Ball have a chance to create the next chapter in the Celtics-Lakers rivalry. After losing the number one pick to the Celtics, Johnson admitted he still “hates” the Lakers. 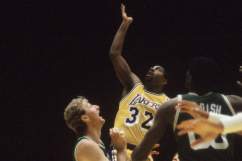