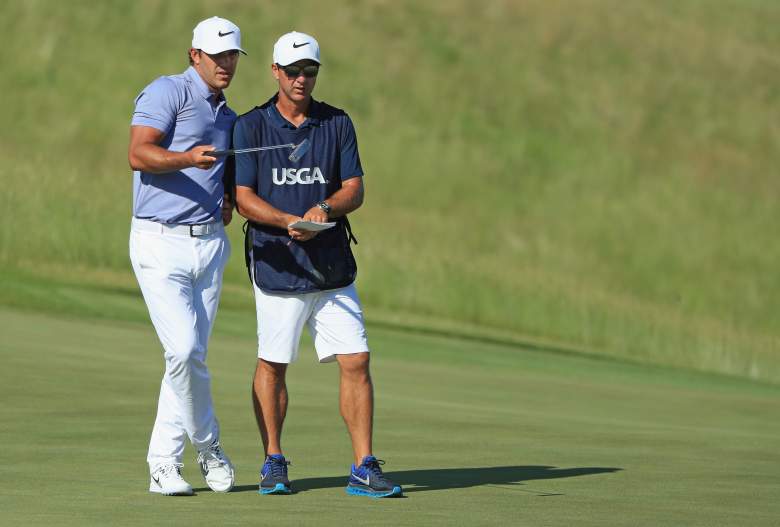 Brooks Koepka and caddie Ricky Elliott on the third green during the second round of the 2017 U.S. Open (Getty)

As of Saturday night, with the third round of the 2017 US Open coming to an end, American Brooks Koepka sits tied for second. He is only a stroke behind the current leader, Brian Harman. By Koepka’s side is his trusted caddie, Ricky Elliot, who has been with Koepka since 2013.

Elliot and Koepka are one of golf’s odd couples. Koepka is one of the sports promising young guns, a 27 year old Floridian. Elliot on the other hand, is a grizzled Irishman, who has seen his fair share of golf courses. Together they have brought Koepka up to the top level of golfers and with Elliot’s help, Koepka has started racking up some of his first major tournament wins. 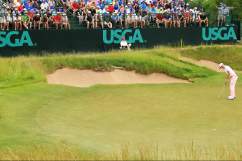 Elliot is slightly different than his fellow caddies though. Unlike most European caddies, he hasn’t hitched his wagon to a European golfer. It’s made an event like the Ryder Cup, where the United States and Europe compete against one another, slightly awkward and a unique challenge for the native of Portrush in Northern Ireland.

Oh, and he can work that kink out of your neck if you need him to as well.

Here’s what you need to know about Ricky Elliot. 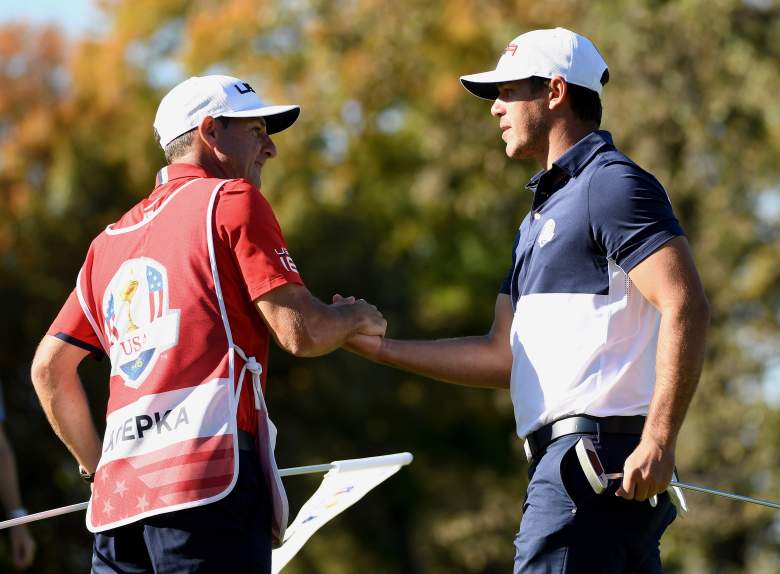 Elliot and Koepka at the 2016 Ryder Cup (Getty)

In 2013 Elliot was in between gigs in Europe, having spent the past few years working for Maarten Lafeber and Ben Curtis. He had started working as a caddie for Lafeber, a Dutchmen, in 2008, and had started making a name for himself.

Koepka was also in Europe at the time and in 2013 was playing on the European Tour. He found himself in need of a caddie when his regular caddie ran into some visa problems. Around that same time Koepka and Elliot met each other at a PGA driving range.

“He’s striping these shots,” Elliot has said of their initial meeting. “I’m like, ‘Happy days.’ I was still in Europe, but you know what it’s like when you see a good player. He made the cut that week, played with Tiger (Woods) on Sunday and said to me in the locker room, ‘Do you fancy doing a few in Europe?'”

And with that, Elliot had found himself a new job, one he still has nearly five years later.

2. Elliot Found Himself in a Unique Situation at the 2016 Ryder Cup 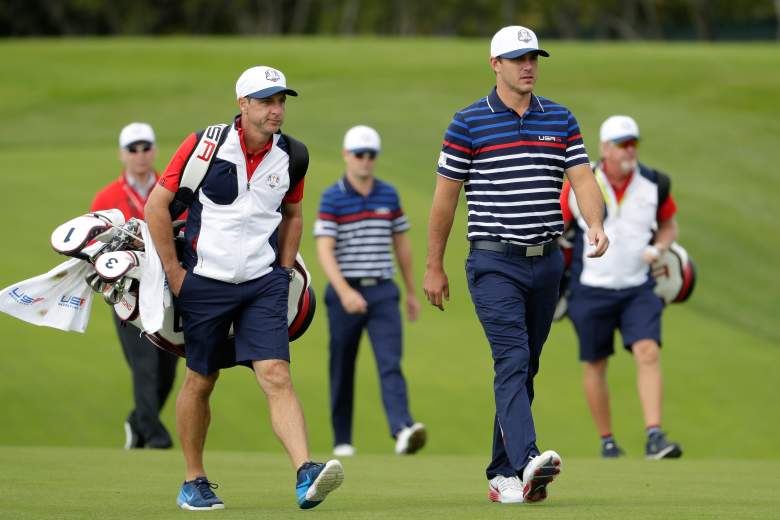 Elliot and Koepka at the 2016 Ryder Cup in Minnesota (Getty)

Elliot probably wouldn’t have imagined that teaming up with an American golfer would have put him on the opposite side of the course as his European brothers at some point, but that’s exactly what happened in 2016. Koepka was ranked number 22 in the world and had been invited to be a part of the American team for the 2016 Ryder Cup. After working together for three years, it was an easy decision to make sure Elliot would be on his bag for the tournament.

He says he never considered sitting out, but Elliot’s decision to be an official member of the American team in an international tournament was a rare move. It had been two decades since a European caddied for someone other than a European at the tournament. For his part, Elliot was prepared for the reception he might get from some of his fellow caddies once the tournament started.

“I’ll be getting plenty of good needle,” he said at the time. “but it’s all in good fun.”

3. Elliot Did Some Last Minute Fill-In Work at The Master’s in 2014 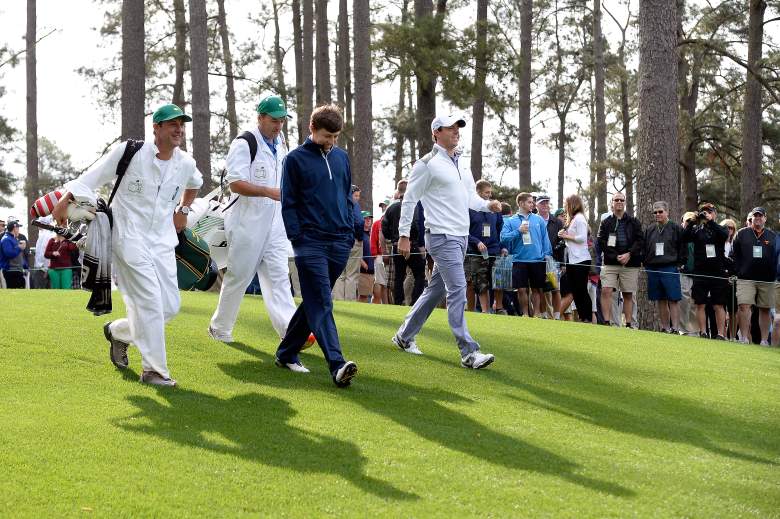 The golf world might spread itself out across multiple countries and continents, but it’s ultimately a tight-knit community. No where was this more apparent than at The Master’s in 2014.

Matt Fitzpatrick, an up and coming U.S. amateur champion from Sheffield, England, was set to make his Master’s debut when he suddenly found himself in need of a new caddie. His original caddie, Lorne Duncan, was unable to participate in the prestigious tournament because his choice of footwear (sandals that he wore for medical reasons) were not allowed. Fitzpatrick’s coach, Mike Walter, started working the phones, trying to find the young golfer a new caddie. Through a recommendation from Lee Westwood’s caddie, Billy Foster, Elliot ended up with the impromptu assignment.

Elliot had worked at the Master’s before, so despite the unusual circumstances, he was prepared for what was ahead of him and the young Fitzpatrick. With Elliot’s help, Fitzpatrick ended up finishing tied for 52nd. Elliot went on to caddie for Koepka at the Master’s in 2015, 2016 and 2017 with Koepka’s best finish coming in 2017 when he finished in tied for 11th.

4. Elliot is an Amateur Chiropractor on the Side

The job of a caddie is a lot more than just totting around a golfer’s bag. You’re expected to know the course in and out, know your golfer’s strengths and weaknesses and be ready to dispense advice on what to do and what not to do when needed. You have to be a friend sometimes and you have to be a psychologist sometimes. It all depends on the circumstances.

Well, sometimes you need to be an amateur chiropractor.

Koepka and Elliot took their partnership to a whole new level at the AT&T Byron Nelson tournament in May of 2017. Koepka wasn’t feeling right and who better than his trusted caddie to get things back on track? Koepka ended up finishing tied for 50th in the tournament, but hey, it could have been worse. 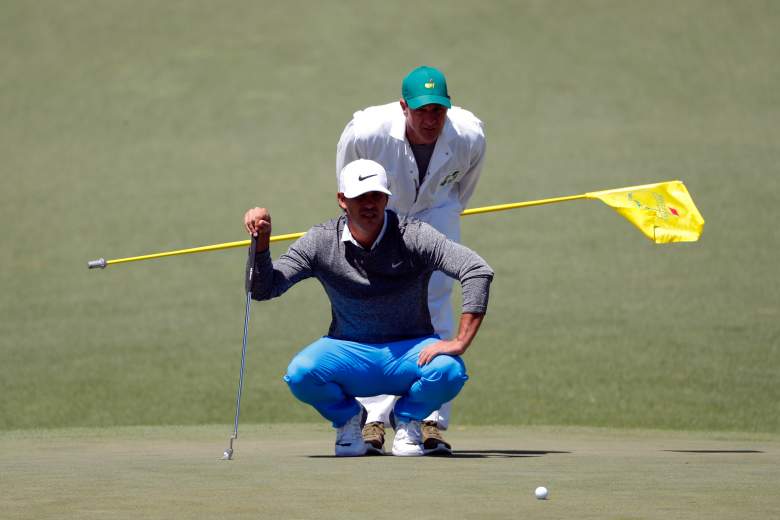 Brooks Koepka and caddie Ricky Elliott at the 2016 Masters (Getty)

After years of bouncing back and forth across the Atlantic Ocean, Elliot decided to become a U.S. citizen in 2015. He had attended college in Ohio and for the past few years had been living in Florida.

“I had to say a sentence in English and I had to spell a word, and I just squeaked by that,” Elliot said about the experience.

“There was about 80 of us in the room and 2,000 people had come to watch. I was there on my own, sitting beside a wee Chinese man waving the flag. It was cool. I’ve spent half my life over here. You’re still always where you’re from, but I’m pleased as punch to be an American citizen.”

With Koepka only stroke behind the leader at the 2017 U.S. Open, you best believe that Koepka is “pleased as punch” to have Elliot by his side.

Read More
5 Fast Facts, Golf, US Open Golf
Ricky Elliot is Brooks Koepka's caddie, an amateur chiropractor and one of the few European caddies to ever caddie for an American at the Ryder Cup