Kevin Love has become a vital part of the Cavaliers’ success. (Getty)

Kevin Love was drafted No. 5 overall by the Memphis Grizzlies but quickly was swapped to the Minnesota Timberwolves in exchange for O.J. Mayo in a multi-player deal. Love found early success with the Timberwolves and was their featured player by the time his second season rolled around.

Love is now one of the “Big Three” in Cleveland and has put together his best season as a Cavalier in 2016-17, totaling 19 points and 11.1 rebounds per game. Let’s check out a few facts about Love both on and off the court.

1. Love Landed With Cavaliers Thanks to a Huge 2014 Trade

Welcome to the Land @kevinlove!

That trade wound up as a big win for Cleveland, as the only major hit they took in the deal was losing Wiggins, who’s been strong for the Timberwolves. The trade was enough to get Love to Cleveland and make the Cavaliers immediate contenders, but it wasn’t until a year after is arrival that they were able to win an NBA title.

Kevin Love’s been featured in plenty of endorsement deals. (Getty)

According to Forbes, Love has made a whole lot of money during his career and currently has a net worth of $23.9 million. This number dates back to June 2016, but includes his five-year, $110 million deal, as well as the multiple off-court endorsements he has.

These include being a Banana Republic style ambassador, joining Nike after his sneaker deal with Chinese brand 361 expired, State Farm, SAXX Underwear and quite a few others.

Of Love’s net worth, $19.9 million of it comes from salary, while an estimated $4 million is from endorsements. Love’s on-court numbers may have taken a slight hit since he joined the Cavaliers and didn’t need to be as ball-dominant, but his endorsements seem to be doing just fine.

Bock has appeared in quite a few magazines, including Sports Illustrated. She also has over 234,000 Instagram followers and is verified on the site. It’s unknown when she and Love began dating, but based on the timeline of photos it seems to be sometime around 2016.

Back in 2013, Bock was voted as Sports Illustrated’s Rookie of the Year at the age of 21. The Huffington Post reported that she earned 41 percent of the votes.

While Bock and Love seem to be going strong, he also introduced the Canadian to her first-ever football game at the Rose Bowl when her boyfriend was back in town supporting his UCLA Bruins. 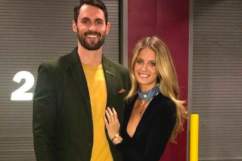 4. His Uncle, Mike Love, Is a Founding Member of the Beach Boys

Kevin isn’t the only famous member of the Love family. (Getty)

When talking about a pretty awesome past or family member, it’s hard to beat having an uncle who was a founding member of the Beach Boys. Meet Mike Love, who was one of the band’s vocalists and lyricists.

As awesome as that is, the younger Love apparently didn’t even realize how big of a deal his uncle being in the Beach Boys was until his freshman year in college. During an interview with Sports Illustrated, he admitted that some people seemed more impressed with his uncle than the fact that he played basketball.

Oh, and apparently he may have given Love his worst-ever Christmas gift, assuming that the uncle on his dad’s side below, is indeed Mike.

Best & Worst Holiday GiftsSome of the NBA’s best tell us of their worst holiday gifts ever received. Check out nba.com/homecourtadvantage/ for more content from American Express. About the NBA: The NBA is the premier professional basketball league in the United States and Canada. The league is truly global, with games and programming in 215 countries and territories in…2014-12-23T21:18:14.000Z

5. Love Was Featured in One of the Pepsi Max Editions Of “Uncle Drew” With Kyrie Irving

Uncle Drew | Chapter 2 | Pepsi Max | BasketballUncle Drew visits with a basketball legend who sends him on a mission to go out and get his old team back together. His first stop —- Los Angeles, CA. Players and spectators at the basketball court were told that they would be filmed for some "basketball b-roll footage" for a local TV station. Put…2012-10-30T15:49:35.000Z

Interestingly, this video came out back in 2012 and is one of the always-popular Uncle Drew videos by Pepsi. The series, which has three parts currently, has been such a hit that ESPN reported that Irving is apparently collaborating on an Uncle Drew film.

Kyrie brought along Love, but this happened before the two had teamed up on the Cavaliers. So, it originally seemed that LeBron was the one pushing for Love to land in Cleveland, but he probably wasn’t the only one.

It’s unknown if Love will be featured in the movie version of Uncle Drew, but he left an impressive impact after his showing in the second-ever episode.

Read More
5 Fast Facts, Basketball, Kevin Love, NBA
Kevin Love has had a superb NBA career and has become a vital part of the Cleveland Cavaliers' success in recent years.