After speculation continued to brew about where he would land, Paul George has been dealt to an unforeseen candidate.

ESPN Senior Writer Ramona Shelburn reported Friday evening that an agreement is in place to send George to the Oklahoma City Thunder. Immediate details on who the Pacers received in the deal were still developing, but that was cleared up just minutes later when she tweeted that the Pacers would receive Victor Oladipo and Domantas Sabonis in exchange.

Paul George has been traded to OKC, per sources

Ever since the Houston Rockets had announced a trade for Chris Paul, there had been strong speculation that they were eyeing up George next. George told the Pacers he wanted out of Indiana and wouldn’t sign a new deal.

The trade puts an end to George’s storied tenure in Indiana, the only team he had played for in the NBA. In his seven seasons in a Pacers jersey — with one cut short due to injury — he averaged 18.1 points and 6.6 rebounds.

George was drafted by the Pacers with the 10th overall pick in the 2010 NBA Draft, and now will join a serious title contender with reigning Most Valuable Player Russell Westbrook and the Thunder. George was a four-time All-Star in his time in Indiana.

Oladipo was selected by the Orlando Magic with the second overall selection in the 2013 NBA Draft out of Indiana University. He spent four seasons with the Magic before being traded to the Thunder on draft night last year and will return to the same state he played college basketball in.

Coincidentally, he was traded from Orlando to Oklahoma City along with the rights of Sabonis, who was selected No. 11 overall in the draft.

During his rookie season, Sabonis, who dominated in college at Gonzaga, didn’t exactly light up the scoreboard but showed great promise. He averaged 5.9 points per game to go along with 3.6 rebounds.

Oladipo, on the other hand, had a strong season in his one season in a Thunder jersey. He averaged 15.9 points per game to go along with 4.3 rebounds and a career-best .442 percent field-goal percentage. 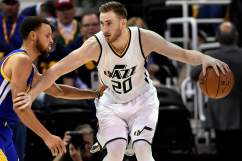 NBA Free Agency 2017: When Does the Signing Period Begin?