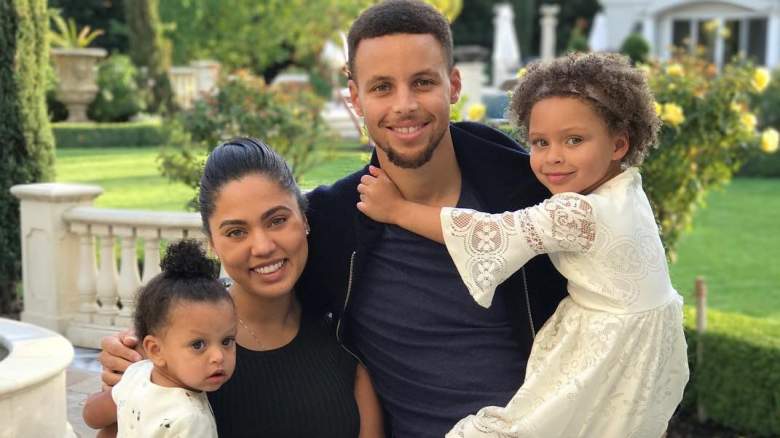 Steph may be the only one on the court, but there’s no question his family is integral to his success. Here’s what you need to know:

1. His Wife Has Her Own Show on Food Network

Back in the bay with my baby

Ayesha (née Alexander) was born in Toronto but moved to the United States when she was 14. She and Steph, who met at a church youth group in Charlotte, didn’t begin dating until a couple years later when he was at Davidson College, she was pursuing an acting career in Los Angeles, and they reconnected at the ESPYs.

“I wasn’t allowed to date in high school,” she says. “We always laugh that we were both focused on God.”

They married in 2011, and while he has taken off as a two-time NBA MVP and one of the game’s top superstars, she has enjoyed immense career success, as well.

In a matter of a couple years, she went from a YouTube cooking channel to segments on CSN Bay Area to having her own show on Food Network, “Ayesha’s Home Kitchen.”

Happy Mother's Day to these beautiful souls right here. @ayeshacurry & @sacurry22 hold me and my girls down everyday and go above and beyond to make life all it should be. They're fearfully and wonderfully made! #stronggenes

Sometime in between him being an NBA star and her having her own show, Steph and Ayesha find the time to be parents to two young daughters, Riley (born July 19, 2012) and Ryan (born July 10, 2015).

“The thing I love about (Stephen) is that he’s not too cool for school,” says Ayesha. “He’ll get down on the floor and play with the girls. He’ll put on dress-up clothes if he has to, and he’s very patient, which is something I’m not. We balance each other out.”

Riley, who stole the show during the 2015 NBA Playoffs, has continued to produce adorable moments with her dad:

Steph and Riley Curry getting ready for Game 2.

Says Steph about his oldest daughter’s fame: “She’s got a great sense of humor. Now she’s the star of the family. If we go somewhere without her, the first question people ask us is, ‘Where’s Riley?'”

3. His Dad Was One of the Best Shooters of His Era

Pops: "you see they already posted that video of me hitting that 30ft bomb with this ? tailored suit on?"

It doesn’t take long to see where Steph’s record-breaking shooting stroke comes from. His dad, Dell Curry, played 16 seasons in the NBA (10 with the Charlotte Hornets) and finished his career shooting 40.2 percent from three-point range. He led the NBA in three-point shooting at 47.6 percent in 1998-99 and finished inside the Top 10 in that stat in seven seasons.

Even today, it’s sometimes difficult to know who has more range:

Steph… to DELL… for THREE!! pic.twitter.com/1W9lroCF4O

In March, Steph passed his dad on the NBA’s all-time scoring list:

While Steph can thank his dad for his jump shot, he credits his mother, Sonya, for his mental toughness.

“She’s a strong woman. Growing up in an NBA household, with my dad being on the road a lot, she did a great job with me and my siblings. She deserves a lot of credit for how we turned out. A lot of people say whatever defensive abilities I have, I get from her. My toughness and grittiness.”

4. His Brother Is a Rising Player in the NBA

Steph’s younger brother Seth has taken a less direct path to the NBA. After one season with Liberty University and then a transfer to Duke, where he starred for three years, he went undrafted in 2013. In the following two years, he had some short stints with Memphis, Cleveland and Phoenix but mostly spent time in the D-League, where he paired with Klay Thompson’s brother, Mychel, to form the minor league version of the Splash Brothers:

Curry carved out a role with the Kings at the end of the 2015-16 season, which helped him earn a contract with the Dallas Mavericks. And in his first season with Dallas, he was easily one of the most improved players in the league, averaging 12.8 points, 2.7 assists, 1.1 steals and 2.0 threes made in 29.0 minutes per game.

Seth played three games against Steph and the Warriors in 2016-17, averaging 10.3 points and 6.0 assists per contest. In those games, Steph averaged 18.3 points and 6.7 assists.

Stephen Curry vs Seth Curry BROTHERS Duel 2017.03.21 – 27 Pts, 13 Assists For Curry!–Take your ball handling to the next level with the BALL HOG GLOVES – http://tiny.cc/DawkGloves –Become a monster. THE WORLD'S MOST ELITE JUMP PROGRAM, TRY LIMITED EDITION: http://goo.gl/BhhT9J –Like And Subscribe For More! Follow me on Twitter – https://twitter.com/DawkinsMTA Boxscore – https://watch.nba.com/game/20170321/GSWDAL DISCLAIMER – All clips property of the NBA. No copyright infringement is intended,…2017-03-22T03:53:04.000Z

The athletic genes don’t stop with Steph and Seth. Their younger sister Sydel–the third of three kids of Dell and Sonya–attended Elon University, where she played for three seasons after sitting out her freshman year with a dislocated knee cap. Playing setter like her mother did at Virginia Tech, she finished with 2,381 assists, which is eighth all-time in school history.

“Basketball is my heart,” she says. “But, there’s something about volleyball, I have a different connection to it. And then the connection with my mom. And it’s just something of my own as well.”

In May, she graduated with a degree in psychology:

Although it truly hasn't hit me yet that it's over, I am extremely thankful for the opportunity to have attended such an amazing university. I want to give special thanks to @elonvb for allowing me to play the game I love and growing me into the woman I am today. Thank you to my amazing parents and family for their massive amount of support not just these past 4 years but the past 22. Thank you to my wonderful friends as well, that I hold near and dear to my heart. Can't wait for this next part of my life minus the paying bills, adulting part ? …BAY AREA IM COMING FOR YA! #ChangeLocations #LongLiveElon #ClassOf'17 ????‍?

She was at the center of controversy during the 2016 Finals, when a Cavaliers fan sent her a series of hateful tweets and was ultimately fired from his job because of it.