Brian Boyle is an ice hockey player who recently inked a 2-year deal to play for the New Jersey Devils. The 32-year-old forward started his professional career in 2007. Boyle has been a central part to each team that he has played for.

This past week, ESPN reported that Boyle has been diagnosed with cancer. He will not be on the ice tonight when the Devils face Boyle’s former team, the New York Rangers, in a pre-season game.

1. Boyle Was Diagnosed with Leukemia During a Routine Team Check-Up

Boyle was diagnosed with chronic myeloid leukemia (CML) after his blood work showed some irregularities.

There are less than 200,000 new cases of CML diagnosed each year. Usually, CML is diagnosed in patients over age 40, but it can be diagnosed at any age (it is more rare in children).

“He will be monitored very closely. He came to us in great shape with relatively few symptoms, so I think he’ll respond quite well to therapy,” Farber said.

CML can be kept in check with medication but may also require additional treatment, such as stem-cell transplant and chemotherapy, according to the American Cancer Society.

Boyle has said that he feels good and that he expects to live a normal life despite his diagnosis. He is focused on the season and expects to play on opening night.

“We have a good plan of attack here, and I’m looking forward to getting on the ice and playing. When that happens I don’t know, but my mindset is Oct. 7,” Boyle said during a recent conference call, according to ESPN. “In a serious way, I’ve been told the treatment, it’s supposed to work. Relative to the big ugly ‘L’ word leukemia, it’s good news,” Boyle added.

And Boyle doesn’t want anyone to be too focused on the fact that he has cancer.

“We don’t have to be asking about it all the time. If I suck one night, it’s because I sucked, not because of any other reason. And hopefully if that’s the biggest issue, then that’s a good thing,” he said.

NHL forward Jason Blake was diagnosed with CML in 2007 and played hockey for six more seasons — something that Boyle is already thinking about.

When Boyle was in high school, his dad, Arthur Boyle, was diagnosed with cancer. Boyle spoke about his dad’s diagnosis in a 2014 interview with ESPN. You can read what he said in part below.

“I was 14 years old when my father was first diagnosed with cancer. He had renal cell carcinoma, which is kidney cancer. It was devastating news to my entire family…Fortunately, the cancer was only in his kidney and hadn’t spread to his pancreas or his liver. He had a successful surgery. Then, eight months later, it was determined the cancer had come back. This time, it was in his lung. When that kind of cancer metastasizes, it’s essentially a death sentence. The worst part was my dad, the strongest man I know, thought he was a goner…When it was determined the cancer was in his lung and he only had a few months to live, my uncle, Kevin, and a close family friend, Rob Griffin, persuaded him to go on a “spiritual cleansing.” The three traveled together to Medjugorje, a mountainous town in Bosnia-Herzegovina that’s believed to be a holy site. When my dad came home, he had an appointment to scan his lung. They determined the cancer had completely disappeared. That was almost 15 years ago. He’s had a clean bill of health ever since.”

2. Boyle Signed a 2-Year Contract with the New Jersey Devils in the Off Season

Boyle was traded to the Toronto Maple Leafs at the end of the 2016-2017 season, leaving Tampa Bay in the third year of his three-year contract. Although Boyle was having a pretty incredible year with the team, the salary cap was blamed for letting Boyle go just two days before the NHL Trade Deadline on February 27. The Lightning agreed to the trade, getting forward Byron Froese and a conditional 2017 2nd-round draft pick in exchange for Boyle.

While Bolts fans were almost certain that the Lightning would re-sign Boyle in the off-season, Boyle surprised them by agreeing to play for New Jersey instead. He signed a $5.1 million contract that would keep him in the Garden State for the next two years. The deal was finalized on July 1, 2017.

“At the end of the day, [the Devils] told me I was needed, which is a great thing. I think they have some great pieces and I’m very close with (former Boston College teammate and Devils goalie) Cory Schneider, who is a huge difference-maker. All I know is that every time I played against New Jersey, no matter where we were, they’re a difficult team to play against. It’s a team that works and if you have everyone working, that’s a good sign for a player like myself. That’s something that benefits me. Having played against them, I can compliment what they have going and I feel I’ll fit into that system pretty nicely,” Boyle told the media following his decision.

3. Boyle Has Played for the Los Angeles Kings, the New York Rangers, the Tampa Bay Lightning, & the Toronto Maple Leafs

Boyle made his NHL debut with the Los Angeles Kings February 2, 2008. The Kings lost to the New Jersey Devils that night 6-3, but it was an exciting night for Boyle nonetheless, as he scored his first career NHL goal.

“It’s pretty neat. I’m still trying to take it in. It hasn’t really hit me yet. It’s nice to score, but you want to win, obviously,” Boyle told the media after the game.

The following year, the Kings traded Boyle to the New York Rangers for the Rangers’ pick in the 2009 NHL Entry Draft. He played with the team through the 2013-2014 season, and was fortunate enough to make it to the Stanley Cup playoffs in 2012. During that series, however, he was forced to miss three games due to a concussion he suffered after being hit by Ottawa Senators‘ forward Chris Neil. The Rangers ended up losing to the Devils in the Eastern Conference Finals that year.

You can watch a video of the hit below.

Boyle was traded to the Tampa Bay Lightning on July 1, 2014. He signed a three-year, $6 million contract with the team and moved to central Florida. Boyle proudly wore Number 11 on his jersey in memory of his best friend who died that summer. You can watch Boyle talk about his decision to take jersey No. 11 in the video below.

4. Boyle Is Married to Lauren Bedford & They Have 2 Children Together

Boyle met Lauren Bedford, a model, while he was playing for the Rangers. The two ended up hitting it off and started talking on the phone, becoming pretty great friends before getting serious. In 2013, the couple got engaged and they tied the knot one year later.

Boyle and Bedford welcomed their son, Declan, in 2015.

“I’ve never been so scared and happy at the same time. When we first heard (Declan), it was pretty emotional. When I first saw him, I was petrified, I guess (that) I was in charge of this human. It was just joy, holding him, being around him. When he sneezed, it was the cutest thing I’ve ever seen,” Boyle told the Tampa Bay Times of becoming a dad.

Boyle and Bedford welcomed their daughter four months ago. The couple hasn’t shared any details about their baby girl.

Praise the Lord! Our little princess arrived today! Our hearts are so filled with love and gratitude. Also, their momma is a rockstar!!! pic.twitter.com/QPoG0L920G

Happy Mother's Day! Thanks for all you do. And giving me those sweet overalls. I love you mom. pic.twitter.com/Qt6fmkJZ5k

Boyle was the seventh child of 13. He is very close with his siblings, many of whom still live in Massachusetts, where he grew up.

Boyle attended St. Sebastian’s School in Needham, Massachusetts. The all-boys, catholic school afforded him a great education and prepared him for college. He attended Boston College where he played hockey for four years.

Boyle isn’t the only one in his family to love hockey. His younger brother Timothy was drafted by the Ottawa Senators in the fourth round of the 2012 NHL Entry Draft.

You can watch Boyle talk about his family in the video below. 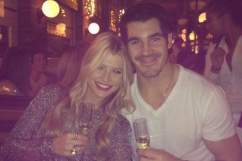