Football fans in Orlando hoping to keep their mind off the storm have found their Sunday to be frustrating. Viewers were expecting to see the Jacksonville Jaguars and Houston Texans play on CBS. This game has been moved for hurricane coverage.

463 if you have spectrum (in Orlando)

Actually let me amend this, I have CBS' football coverage on channel 6.2 via my antenna. https://t.co/dkqE8jY3vD

The Fox games have also been moved in the Orlando area. Channel 65 will carry the NFL doubleheader.

For the #NFL games in #Orlando. @news6wkmg @COZITV has @Jaguars @HoustonTexans game. @Fox35News @MY65 has @AtlantaFalcons @ChicagoBears.

My 65 is carrying the Falcons-Bears game during the early slate of games and will later show the Seahawks-Packers Fox matchup. The majority of football games involving Florida teams have been canceled. The Tampa Buccaneers and Miami Dolphins were slated to play in Week 1. The game was postponed to November 19 with Hurricane Irma impacting both Tampa and Miami.

The Jaguars were still able to play since the game was in Houston.

The college football schedule has undergone a major overhaul with the storm. This week’s Florida State-Miami game has been moved to October 7. Florida State’s Week 2 matchup with Louisiana Monroe was already postponed. Miami’s matchup with Arkansas State was canceled. The UCF-Memphis game was rescheduled for Friday, September 8 then eventually cancelled. USF’s game against UConn was canceled.

NBC WESH 2 has moved the Cowboys-Giants game to CW 18 WKCF-TV. The game will kick off there at 8:30 p.m. Eastern. During the SNF pregame coverage, NBC was still showing hurricane coverage.

Dallas Cowboys vs. New York Giants game scheduled to air on WESH 2 can be seen CW 18 WKCF-TV at 8:30 p.m. pic.twitter.com/JoSBXz9EWp

Please visit Heavy’s rundown of free trial options to stream the game in your area. 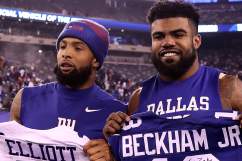 Giants vs. Cowboys Live Stream: How to Watch Game Online