Jakob Poeltl is headed to the Spurs, causing many San Antonio fans to wonder what they are getting with the big man. While the focus of the trade is on Kawhi Leonard and DeMar DeRozan, Poeltl is an interesting addition to the deal. Poeltl is just two years removed from being the No. 9 pick in the 2016 NBA Draft.

Poeltl is originally from Austria, and spent two seasons playing college basketball at Utah. Poeltl averaged 17.2 points, 9.1 rebounds and 1.6 blocks his last season at Utah. The big man has not had the same kind of success in the NBA, but it is still early in his career.

Poeltl averaged 6.9 points and 4.8 rebounds last season for the Raptors. He saw his playing time increased from 11.6 minutes per game to 18.6 minutes last season. Here’s how Draft Express described Poeltl as a prospect back in 2016 heading into the draft.

One of the breakout NBA prospects of last season, Jakob Poeltl emerged from relative obscurity to average 9.2 points and 6.8 rebounds over 23.3 minutes per game as a true freshman while helping Utah to a Sweet Sixteen appearance. Opting to return to school to improve his already lofty draft stock, Poeltl took a calculated risk, which appears likely to pay dividends. Adding to his resume in impressive fashion after a summer playing in exhibition games for the Austrian National Team against the talented rosters fielded by the likes of Germany, Italy, and Lithuania, Poeltl emerged as one of the most productive big men in the country, winning Pac-12 Player of the Year honors along with both the Kareem Abdul-Jabbar and Pete Newell Big Man awards, averaging 17.3 points and 9.1 rebounds over 30.5 minutes per game…

Emerging seemingly out of the blue as a 17 year old to average 15.3 points and 12.8 rebounds per game at the 2012 FIBA U18 Division B European Championship, Poeltl has taken one of the more unique paths to the draft of any international player in recently memory. Posting similar numbers at the 2013 edition of the same championship, Poeltl’s recruitment, both from college programs and clubs in Europe, picked up dramatically as the basketball world began to take notice of his combination of size and skill.

Poeltl flashed, at times, for the Raptors during the playoffs, but still has a ways to go to live up to previous expectations. Going to the Spurs will only help Poeltl’s development. Poeltl may not live up to the top 10 billing he had when the Raptors drafted him, but it is feasible to see the big man developing into a solid starter after a couple years in the Spurs system. Gregg Popovich has been known to turn around player’s careers who have either been undervalued or under-performed. Poeltl is just 22 years old, and it is still too early to give up on the former lottery pick.

Raptors Republic’s Matt Shantz described why Poeltl was a solid role player for the Raptors.

Poeltl is not physically dominant. He is not a highlight reel waiting to happen. He rarely looks explosive, he hardly looks fast, and is rarely considered to be flashy in any sense of the word.

He also doesn’t particularly look to be working all that hard. There is a smoothness to his game that makes his movements look completely natural.

Poeltl just…is. He is a big man who knows where to be. He almost always makes the right rotation, or knows the angle at which to attack a rebound. He sets screens to open up space for the ball handler, before either diving to the rim or re-setting in perfect harmony to produce a better angle for his teammate (he does this particularly well with fellow former Utah Ute, Delon Wright).

It is not fair to call Poeltl a bad shooter, as the big man rarely takes shots outside the paint. The above video is from Poeltl’s pre-draft workout in 2016, and shows him with solid shooting form. According to NBA Savant, Poeltl shot 72.2 percent in his shots around the basket. He was a solid 46.3 percent in shots around the free throw line. Poeltl only took one three pointer, and 16 shots that we would consider mid-range jumpers. Looking at the NBA Savant shot chart, Poeltl’s shots are almost always around the basket.

This would not have been a major deal five years ago, but the league is changing requiring more from its big man. If Poeltl wants to live up to the type of prospect many thought he could be, the big man needs to develop more of a perimeter game. Poeltl’s strength is likely to continue to be on the block, but a long-range jumper would allow the Spurs to put him on the floor more.

There is no rush in Poeltl’s development as he will be able to sit behind Pau Gasol this season. Gasol will be a good big man for Poeltl to learn from as he has a history of keeping defenses honest thanks to his jumper. Poeltl is polished enough to give the Spurs 15 to 20 minutes a night next season. 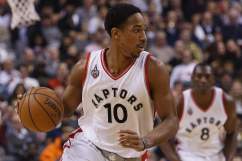 Read More
Basketball, NBA, San Antonio Spurs
Who is Jakob Poeltl? Meet the big man that is headed to the Spurs as part of the Kawhi Leonard trade.